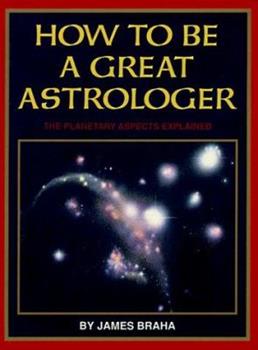 How to Be a Great Astrologer: The Planetary Aspects Explained

This guide gives advice on becoming an astrologer, showing how astrology works. Starting with a poem by Babaji, it includes a chapter on planetary aspect theory, addressing issues such as research-oriented astrology and the house system controversy, and explaining the importance of the planets.

Published by Thriftbooks.com User , 18 years ago
The title almost made me bypass this book. That would have been unfortunate, for this is the best reference on the meaning of planetary aspects and lunar nodes that I have found. Chart interpretation involving these features bears about as much relationship to simple "sun sign" astrology, as basic arithmetic bears to calculus. Aspects are the angular relationships between planets in a birth chart. Too many references barely give you more information on them than simply stating if they are "favorable" or "unfavorable." Braha gives you extremely detailed and perceptive explanations of all the significant aspects (conjunctions, squares, trines, oppositions, sextiles) for all possible combinations of the inner planets. The outer planets are not covered because their effects occur over such long spans of time as to be generational and tending to impact society as a whole rather than individuals. He writes authoritatively in a Vedic style that comes across as pure, essential, and archetypical. The lunar nodes are the points where the orbit of the moon intersects the plane of the ecliptic in a chart. They are probably the single most important feature in a Western birth chart. The north node indicates a person's future, while the south reveals the past (previous incarnations.) Or put another way, the south is what we have already mastered in previous lives, while the north indicates what we are here to achieve. Interpretation for both sign and house location are given My only truly accurate standard for evaluating this book's interpretations was to compare it against my own chart and life. The results were uncannily accurate and went far beyond vague general suggestions. Having studied astrology professionally I am mightily impressed by Mr. Braha's work. He is truly the sort of great astrologer that he dedicates this book to. Perhaps this is because he practices both eastern and western traditions, and because he comes from a culture where the profession of astrologer is regarded as a very serious profession indeed. Oh yes, the full-page illustrations of Gustav Dore' are far more than just filler, for they fit the mood of the text exactly. There are several that I would like to tract down for framing. If you are a serious student of astrology this book will become your most valuable reference for fleshing out your interpretation of a chart.

Published by Thriftbooks.com User , 21 years ago
Braha's book is a treasured one in my collection. He gives a very informative description of the major aspects (conjunction, sextile, trine, square, and opposition). His book also has a small section on the moon's nodes. According to his bio, Braha's background is in Vedic astrology, and you get a flavor of that in this book for Western astrologers.

Published by Thriftbooks.com User , 21 years ago
Braha's book is a treasured one in my collection. He gives a very informative description of the major aspects (conjunction, sextile, trine, square, and opposition). His book also has a small section on the moon's nodes. According to his bio, Braha's background is in Hindu astrology, and you get a flavor of that in this book for Western astrologers.

Published by Thriftbooks.com User , 23 years ago
This book contains very powerful descriptions of the various planetary aspects. I've gotten more positive feedback from those who've read these than from any other book. Really well done.

The most accurate book on planetary aspects I read

Published by Thriftbooks.com User , 25 years ago
Though I am french speaking, I am using this book every times a make an interpretation. I consider it give the best clue for understanding the influence of planetary aspect on the characteristic of human being. Robert GADA-BARENCO GENEVA SWITZERLAND
Trustpilot
Copyright © 2022 Thriftbooks.com Terms of Use | Privacy Policy | Do Not Sell My Personal Information | Accessibility Statement
ThriftBooks® and the ThriftBooks® logo are registered trademarks of Thrift Books Global, LLC