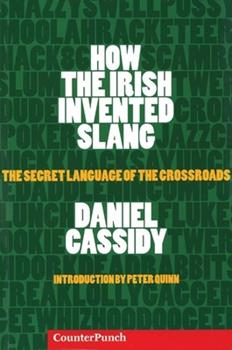 How the Irish Invented Slang: The Secret Language of the Crossroads

In a series of lively essays, this pioneering book proves that US slang has its strongest wellsprings in nineteenth-century Irish America. "Jazz" and "poker," "sucker" and "scam" all derive from Irish. While demonstrating this, Daniel Cassidy simultaneously traces the hidden history of how Ireland fashioned America, not just linguistically, but through the Irish gambling underworld, urban street gangs, and the powerful political machines that grew...

What a charming book

Published by Thriftbooks.com User , 12 years ago
Here you will find an introduction to the Irish language through a discussion of American slang and Irish-American history with a very inventive and inclusive spirit. Certain words and phrases common in every day speech will make a lot more sense once you have considered Cassidy's insights, and the Irish language will seem less distant and unapproachable. I recommend this book to any word maven and to anyone interested in the Irish-American experience and roots.

Published by Thriftbooks.com User , 13 years ago
The essays in this book are a wonderful wake-up call for the influence of Irish culture in the English language. Most of the reviews here cover the discussion of the various terms well. Peter Quinn's intro/snapshot history hints at the centuries of class and cultural suppression that have kept recognition of the contents of this book from getting the coverage it deserves. One could draw analogies to the Palestinian situation here or several others in history. Quinn doesn't dwell on it, nor should we. In a very delicate and entertaining way Cassidy takes the reader through a few areas where the Irish language has a marked influence. The point here is to appreciate the contribution of Gaelic/Irish to present culture. The book makes this easy to do either as a return trip, stop at the crossroads, or take as a companion on the road ahead.

Published by Thriftbooks.com User , 13 years ago
One small, little unremarked upon citation (p 107) regarding Jazz great Dizzy Gillespie demolishes any and all pedantic criticism(s) regarding the origin of any given word in Cassidy's classic work. Cassidy cites Yale University music professor Willie Ruff, Ruff says Dizzy told him, ".....blacks near his home in Alabama and the Carolinas had once spoken exclusively in Scots Gaelic." Am I the only one floored by Gaeltechts in the American South peopled by African Americans?! This is a tremendous story, important history completely overlooked by the weavers of Americas Authorized History. Cassidy is right.

Great work by a distinguished scholar.

Published by Thriftbooks.com User , 13 years ago
I had the pleasure of working with Danniel Cassidy for ten years and i saw him work on this book for at least 5 of those years. This was his crowning glory an deservedly so. He spent hours researching old newspaper articles as well as text. He left no stone unturned to find that four leaved clover. I will miss Cassidy, ssdly he passed away recently. However his work shall live forever after and I am glad he wrote this book. I enjoyed reading it.

Published by Thriftbooks.com User , 15 years ago
from the "Irish News", Belfast, July 18, 2007, "It is a conundrum that has long confused scholars - why the Irish language seems to have had little influence on English as spoken in America. Millions of Irish emigrated to America but English as Americans now speak it appears devoid of Irish references - despite the reputation of the Irish for verbal creativity. Now a new book credits the Irish language for influencing spoken English - and slang most of all. In How the Irish Invented Slang: the Secret Language of the Crossroads, Irish American academic Daniel Cassidy demonstrates that the influence of Irish emigrants on American existence went beyond pubs and politics. "The words and phrases of Ireland are as woven into the clamour (glam mor, great howl, shout and roar) and racket (raic ard, loud melee) of American life as the hot jazz (teas, pron j'as, cd'as, heat, passion, excitement) of New Orleans." Mr Cassidy hopes to waft the winds of change in studies of English - but reminds readers that academics have long harboured a snobbish attitude to Irish. HL Mencken, author of The American Language, said the Irish had contributed very few words to Americans. "Perhaps speakeasy, shillelah and smithereens exhaust the list," Mencken wrote. Mr Cassidy points out that West used the word "babe", meaning a physically attractive woman, in 1926 - and that the Irish word 'bab' meant a baby, woman or a term of affection. And baloney, meaning nonsense - a word synonymous with America if ever there was one - is derived from the Irish beal onna, meaning foolish talk. So the idea that the Irish have contributed zilch (word meaning nothing or zero, origin unknown) to American English could be bealonna (baloney after all." - Margaret Canning
Trustpilot
Copyright © 2022 Thriftbooks.com Terms of Use | Privacy Policy | Do Not Sell or Share My Personal Information | Accessibility Statement
ThriftBooks® and the ThriftBooks® logo are registered trademarks of Thrift Books Global, LLC