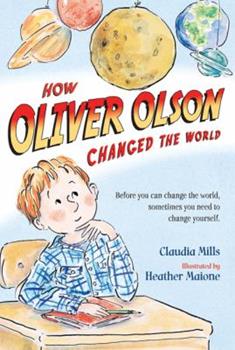 How Oliver Olson Changed the World

Oliver Olson's teacher is always saying that one person with a big idea can change the world. But how is Oliver supposed to change the world when his parents won't let him do anything on his own--not his class projects or even attending activities such as the space sleepover at school. Afraid he will become an outsider like ex-planet Pluto, Oliver decides to take control of his corner of the universe How Oliver Olson Changed the World is an irresistible...

Published by Thriftbooks.com User , 11 years ago
How would you like it if your parents always did your homework? On first glance, most kids would probably think that would be pretty terrific. But after reading How Oliver Olson Changed the World, they might not think it was such a great idea. How Oliver Olson Changed the World is a delightful, funny early chapter book that will capture early readers' attention right away. It features Oliver, a timid, overprotected third grader who manages to finally come into his own with the space diorama project. But in the beginning of the book, things are not looking so rosy for Oliver. Early on we learn that his parents have managed to keep him in a protective cocoon for much of his life, due to starting out as a sickly child. Sleepovers-no! Riding bikes outside of the cul de sac-no! Doing homework on his own-no! With a diorama of the solar system on the horizon, we watch as Oliver's parents start organizing and planning the entire project. It's a pretty hilarious scene which may ring ever-so-true to many children and parents alike. Luckily for Oliver, he gets his first break when Crystal Harding (the most talkative girl in the school) decides that they should do the diorama together, and Oliver's parents are gently shoved aside. What follows is a delightful story that includes fun facts about the solar system (it addresses Pluto's recent ouster from the planet kingdom in a thought-provoking way), as well as a very realistic depiction of third graders at work and play. Although Oliver and Crystal are the main characters, the other kids in the class are deftly drawn, so you get a sense of them as individuals. In addition to the diorama, the class is also given an assignment to come up with an idea that would change the world. Of course, we get Oliver's mother's idea: "Put a sign by the school that says no U-turns....It could save someone's life. It could change the world for one person at least." And Oliver's idea: " Schools should make a rule that parents can't help homework. It's like, what's the point of homework, if parents do it?" There's a neat twist in the end that contributes a lot to the growth of Oliver's character. And grow he does, in a perfect third-grade way. How Oliver Changed the World is lighthearted, but also poignant. The writing is breezy and very funny. I actually found myself chuckling to myself in quite a few places. I think this would be a great read-aloud book for a first or second grade class, as well as a perfect early chapter book for the emerging reader. Highly recommended.

Published by Thriftbooks.com User , 12 years ago
Wow! I can't really add much to the previous review. :) I was looking for a book for my very advanced 1st grade readers and can't wait to show them this one. It has plenty of humor and also teaches science. Since Pluto being excluded as a planet is a major theme in the book, it is up-to-date with the planet information. This is a fun, creative book! I hope they make this into a series.

Be careful what you wish for