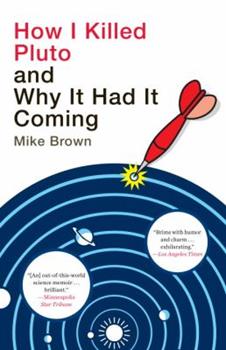 How I Killed Pluto and Why It Had It Coming

The solar system most of us grew up with included nine planets, with Mercury closest to the sun and Pluto at the outer edge. Then, in 2005, astronomer Mike Brown made the discovery of a lifetime: a tenth planet, Eris, slightly bigger than Pluto. But instead of adding one more planet to our solar system, Brown's find ignited a firestorm of controversy that culminated in the demotion of Pluto from real planet to the newly coined category of "dwarf"...

Published by moss , 1 year ago
This is a funny and touching book written by the astronomer who discovered a solar system body bigger than Pluto. Including romance, scandal, science, and wonder, it's an engaging look at why Pluto had to be downgraded from being a "planet". A deeply personal yet universal story by the person who arguably had the most to lose from the very decision he was advocating for. Ultimately this book is a defense of the modern scientific process that has deep resonance in today's world of misinformation and science denial.
Trustpilot
Copyright © 2022 Thriftbooks.com Terms of Use | Privacy Policy | Do Not Sell or Share My Personal Information | Accessibility Statement
ThriftBooks® and the ThriftBooks® logo are registered trademarks of Thrift Books Global, LLC