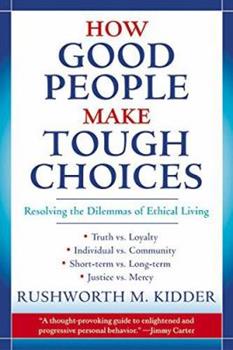 This description may be from another edition of this product. This insightful and brilliant analysis of ethics teaches readers valuable skills in evaluating tough choices and arriving at sound conclusions. "A thought-provoking guide to enlightened and...

The few. The moral. The good people.

Published by Thriftbooks.com User , 14 years ago
There are no books on the market that address morality that way that this book does. Not the Bible. Not my university textbook on ethics. None. It's one thing to talk about moral issues and take sides with them, but it is another thing entirely to talk about solid moral principles that can guide you in making moral decisions based on reason instead of blind faith. This is a book that does the talking. If you want to find out what a religion or a moral philosophy is really made of, nothing will put it to a test more than a moral dilemma will, and this book is chock full of examples of real life moral dilemmas. Some of those moral dilemmas are things most people wouldn't even think of as moral dilemmas -- justice vs mercy for example. One dilemma I like (to paraphrase) was the one about the highway patrol officer who comes upon a truck wreck where the driver is irremovably pinned down in the cab and a fuel-fed fire is starting to blaze out-of-control. The driver asks the officer to kill him before he is fried alive. What would you do and how would it be a moral decision? It is not a perfect book, for example, there was the issue of what is truth. Truth and fact are not the same thing. Truth is whatever people *believe* to be fact, whether or not what they believe in really is a fact or not. Truth is not a reliable yardstick by which to gauge morality by. That might seem like nitpicking with words, but the most common cause of distress of clients in counseling is confusing facts with truth. Knowing the difference between the two is important to making proper moral decisions, otherwise you might be basing your decision on an illusion. It also didn't cover the issue of punishment. The topic of punishment often comes up in moral discussions as a deterrent from being immoral. If a person needs to be deterred by force from being immoral, does that deterred person become a moral person then, or are they a person only putting on an act of being moral, only to resort to immorality in private when nobody is looking and they can be the "real me"? So is there no other purpose of punishment, besides being a poor deterrent? Most philosophies of punishment I've heard have very immoral reasoning at their cores and therefore should be discussed in every discussion on moral or ethics. Therefore any religion or moral philosophy based on deterrent is an immoral religion or philosophy.

Published by Thriftbooks.com User , 16 years ago
This books allows students of all ages to start the difficult job of ethical decision making. Starting with its "Right vs. Right" concept, it teaches various ways to think about ethical decision making. This would be a wonderful book for a middle school or high school ethics class as well as an adult discussion group. Could easily be adapted to a church setting.

Framing the question frames the answer

Published by Thriftbooks.com User , 17 years ago
Kidder's book essentially boils down any tough choice down to basic conflicts, a struggle for competing "rights" or things we value. We value loyalty, for example, and we value honesty...what happens if I know my spouse is cheating on our taxes or from their company?Thought provoking, easily read....strongly recommend.

Published by Thriftbooks.com User , 22 years ago
This book has provided me with a structure through which I can begin to think more openly about ethics. It has surprised me with a number of new ideas, most of which are relevant to all of us. I highly recommend this work to those who care about living a thoughtful life. Ethics this way is not stodgy and limiting, but expansive and exciting.

The best book on the subject

Published by Thriftbooks.com User , 22 years ago
After reading a variety of books on ethics and ethical decision making, this one stood out for its clarity of thinking and superb examples. A book that makes you think about your life and how you choose when the choice is hardest of all: between right and right.
Copyright © 2020 Thriftbooks.com Terms of Use | Privacy Policy | Do Not Sell My Personal Information | Accessibility Statement
ThriftBooks® and the ThriftBooks® logo are registered trademarks of Thrift Books Global, LLC