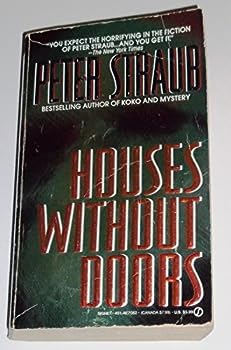 This description may be from another edition of this product. A spectacular collection of short fiction which includes the seeds of Straub's powerful Blue Rose trilogy. "You expect the horrifying in the fiction of Peter Straub...and you get it." (New York Times)...

Published by Thriftbooks.com User , 18 years ago
Houses Without Doors presents short stories with incredibly creepy moods. Their creepiness comes not from grotesqueness, but rather, from the very normalcy of the settings that horrid things take place in. You aren't transported to some otherwordly place, rather the terror is brought straight into your personal living space. Each story has it's own focus, much having to do with the type of horror that children find themselves confronting - and even perpetrating. Those who like Stephen King's child-type characters may also enjoy these. The stories are eerie in their familiarity, but work more on a psychlogical/emotional level than they do through plot. Many of the stories are non-linear, a tool that the author uses to great effect. Not only does it add to the moodiness of the story, it also notches up the emotions that the characters seem to feel. Readers who enjoy non-linear story telling will definetely enjoy this book. Those who prefer a plot-heavy and/or super-suspenseful type book may not like it as well.Overall excellent stories, frightening characters, and perfect horror mood. Definetely a book well worth the money.

A House Can Be Without A Door, But Still Have A Window

Published by Thriftbooks.com User , 19 years ago
What I loved about this collection of stories was that in every one of them it showed the dark side of people who can at least be consisdered kind of normal. Peter Straub holds nothing back when it comes to his characters and it has always been a great rule of fiction to always tell the truth. Straub has told the truth here and may have dove too deep into it for some people's tastes.

Published by Thriftbooks.com User , 19 years ago
I was glad to see that Peter Straub released this short collection of his work. There are some dark & memorable stories here. Blue Rose and The Juniper Tree are the best of the lot. I enjoyed those especially since they tie in heavily to Koko and The Throat. I was sorry to see that The Ghost Village wasn't part of this collection, but, it did appear later in another of Peter's collections called Magic Terror. The last story in the book, Mrs. God is excellent. Since there is a longer, slightly different version of it, in limited release, I would recommend that instead. There are smaller interludes that divide each story and these interludes make up their own short story as well. All in all, anything by Peter Straub is a going to show what a true Master he is at his craft.

Published by Thriftbooks.com User , 20 years ago
What I like about Peter Straub is that his books make you think. Sometimes you're in the mood for a horror book or thriller that will not only entertain but make you think a bit as well. this book does just that. I purchased the audio version and thus didn't get all the stories that were in the print endition but from what I heard the stories were captivating. "blue Rose" was by far the best; though the ending was a bit of a let down not because of the story itself but because the character didnt' get his due. Another good one was "Bar Talk" which I suspect was a sort of a continuation of "blue Rose." I can't wait to start Koko which also expands the story of "blue Rose." all and all a good entertaining audiobook. The reader did a fine job narrating and I loved his deep smooth voice.

Characters you can really relate to.

Published by Thriftbooks.com User , 20 years ago
This book sure gets very little of the attention that does the newer works of Mr. Straub. I just finished Straub's novel Mr. X. There are so many bad reviews of it I thought I would review his best book, Houses Without Doors, instead. The stories in this book deal with characters who have all the faults and strangeness of real people, in contrast to generic, always-confident mannequins like Ned Dunstan in Mr. X. I have read this book through 4 times and it is one of my favorite books ever. Unfortunately, I cannot recommend any other books by Mr. Straub except perhaps Ghost Story.
Copyright © 2020 Thriftbooks.com Terms of Use | Privacy Policy | Do Not Sell My Personal Information | Accessibility Statement
ThriftBooks® and the ThriftBooks® logo are registered trademarks of Thrift Books Global, LLC