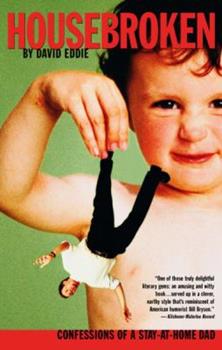 Housebroken : Confessions of a Stay-at-Home Dad

Once, David Eddie was a freewheeling comic novelist. Then, after years of slow-roasting in Bachelor Hell, Mr. Eddie met Ms. Right-who delivered an ultimatum on her thirtieth birthday: "Fertilize my... This description may be from another edition of this product.

Adventures of a stay-at-home home dad - for moms too!

Published by Thriftbooks.com User , 18 years ago
This book is absolutely hilarious! It is warm, funny, smart, and should be read by dads AND moms alike. Ladies, don't let the title sway you from picking this up.David Eddie details his days as a bachelor wonderfully, complete with descriptions of his apartment such as putting food out on his "trunk/coffee table in his living/dining/bedroom/study area". He leaves this swinging lifestyle for Pam, "Ms.Right", and they purchase a home across from a mental health center. The irony of raising a child, (a job that can be mentally stressful at times as any parent knows), across from an actual mental health center was just too funny for me! David Eddie and Pam married when she was 5 months pregnant with their son, and due to several lay offs for David and Pam's growing career, he ultimately becomes the stay-at-home parent to their little boy Nicholas. He talks about middle of the night wake ups, people making unsolicited comments on his parenting in public, and finding adventure in his neighborhood. He gives advice on methods of child rearing that have come to work for him, and commiserates on topics that any parent can appreciate, such as "Nap Time: Your Window to Sanity". I love this book because it's a real life account of a 'househusband', but it's just as touching and funny for me as a woman and mother. I was touched and amused by a father's point of view on his child coming into the world; as he put it, "he felt anxiety and protectiveness toward him and hoped he would always be warm and dry in the world and find happiness". His stories about the birth experience, his relationship with Pam before and after baby, vacationing, all ring true and made me laugh out loud. It's great that he takes over what is usually considered a 'mother/female role', and keeps his masculinity in tact. He manages to be nuturing and 'just one of the guys' at the same time.Kudos to David Eddie, personally AND professionally!!

Punk to Pa book a riot

Published by Thriftbooks.com User , 18 years ago
Housebroken is a book about parenting for people who aren?t interested in books about parenting. Finally, a witty, playful AND philosophical take on the biggest decision of your life, by one of the funniest authors of our day. Eddie?s new book is a fresh break from the slightly bitter, bleary eyed assessments of this ancient art: You don?t get any sleep? You don?t say! Instead of whining about scraping applesauce off the walls for 10 pages, Housebroken explores new ground with the kind of details you?ve always want to know, especially for lads: Is it possible to still be cool as a Dad? What happens to your mojo? Your sex life? What REALLY changes? What do you actually need to know to be a Dad? It?s all here in Housebroken for the anxious Dad-to-be. Think About A Boy meets Bukowski and you?re getting warm. Eddie?s transition from Cad to Dad is the story for every man who is taking the leap or even just thinking about it. That mysterious gap between the single life and fatherhood is traversed with enough insight and original humor to give the nervous newcomer a very clear idea of what to expect. Still, it?s not a dude book exclusively. For all those girls out there wondering about that tormented clown expression on your man?s face whenever the subject of children comes up ? read this! Whether you?re a parent in waiting, just flirting with the idea or sure you?re not going to breed, Housebroken is a hilarious and inspiring read, the first of it?s kind on the topic of domestic Dads.

A Recipe for Laughter and Reflection

Published by Thriftbooks.com User , 18 years ago
Start with one part humorous self-criticism, add two rounds of the battle of the sexes, season with sleeplessness, stir-in references to unsuccessful careers and the writing process, baste with challenging child care, season with memorable one-liners and smooth writing, wrap in love, and cover with household chores and frustrations. That's the recipe for Housebroken, a survival manual for any man who's about to become a stay-at-home in-charge-of-it-all Dad of a little one and humorous relief for Moms everywhere. Mr. Eddie's writing and perspective remind me very much of Erma Bombek and her descriptions of how your children drive you crazy. The main differences are that Mr. Eddie is a better writer and uses fewer one-liners. The ones he does use are priceless though: "Dressing small children is not as easy as you might think. First buy an octopus and a string bag . . . ."Here are the chapter titles:1. A Square Peg2. "She's Perfect"3. A Cad's Fear of Kids4. "I'm a Househusband."5. The Advent of Nicholas6. Our Horrible Honeymoon7. The Hong Kong Handover8. The Politics of Drudgery9. How to Cook10. Towards a Possible Redefinition of Machismo11. "What Do You Do All Day?"12. How to Dad The book recounts how Mr. Eddie transitioned from being adrift in his own urban world of freelance writing, messy digs and chasing available women to fathering a son, marrying, and becoming the primary care-giver for that child in the suburbs while his "perfect" wife returned to her high-paying career in television news. In the process, he steals a few moments to nap and reflect (and occasionally to write). All writers will love and appreciate his fascination with old, cheap typewriters (so there's always one nearby where he can peck out notes for a writing idea no matter where he is in the house). He's certainly not Super Dad . . . more like Improving, Loving Dad. Although the book is played primarily for laughs, it switches somewhere midway through into a mostly reflective book on sexual roles and the love and care that a Father is capable of providing for his children. The reflection part played well with me because I've had several friends who have operated as single, stay-at-home fathers. Interestingly, each of them is a writer and has an outstanding sense of humor. I felt like deja vu as I read this fine book, from that perspective. Mr. Eddie's reflections exactly matched those of my friends. Does being a writer create your destiny as a father? I hope not. The only male writer I knew when I was growing up was a hopeless alcoholic who passed out soon after finishing his writing quota for the day. His family walked around quietly until the next morning lest he be roused in an angry mood. But then again, Mr. Eddie does suggest that liquor makes the whole process more bearable. Hmmm. There's drink for reflection . . . er, I mean, food for thought. The book made me delighted that my hard-working wife put me in charge of the outdoors whi

Published by Thriftbooks.com User , 18 years ago
I find myself getting to an age now (38) where fatherhood might be just around the corner. I've found someone, or rather she's found me, and not too unlike the main protaganist at the onset of this sucker, am feeling the pressures of someone who desperately wants her eggs fertilized. This book has given me a vision, albeit a rather hilarious version, of what might be in store for me, as i will no doubt be responsible for the bringin' up of baby, seeing as I have neither the income potential or inclination to stay amongst the working that my intended seems to enjoy. Enjoy!!
Trustpilot
Copyright © 2022 Thriftbooks.com Terms of Use | Privacy Policy | Do Not Sell My Personal Information | Accessibility Statement
ThriftBooks® and the ThriftBooks® logo are registered trademarks of Thrift Books Global, LLC