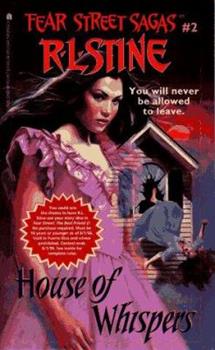 Visiting her cousins Simon and Angelica Fear, unaware of the terrible legacy that haunts everyone associated with the Fear family, Amy Pierce senses an evil presence in their New Orleans mansion and... This description may be from another edition of this product.

Published by Thriftbooks.com User , 19 years ago
House of Whispers by R.L. Stine is a scary story about a girl facing murder. Amy is a seventeen year old girl who's dad was wounded while fighting in the civil war. Amy's mother had to go tend to his wounds, and sent Amy off to her cousin Angelica Fear's mansion. Amy has to help Angelica with her five kids while her husband is away. Amy has heard many rumors of Angelica practicing the dark arts. Julia, one of Angelica's daughters, told Amy about a gruesome story about an evil column of faces that roamed the house at night. It petrifies your body with fear. It eats you, flesh, bone, and blood. Amy saves Mrs. Hathaway, Angelica's next door neighbor, from a water moccasin and meets her son, David, and immediately falls in love. David was also wounded in the war, and has a sling and an eye patch. Throughout the book there are three deaths and Angelica tells Amy David is the killer. Amy finds out she has a power, the same as Angelica's, but stronger. On a scale from 1 to 10, I give this book a 9. It had a lot of `cliff hangers' at the end of each chapter. The characters were really believable. R.L. Stine used great descriptive human characteristics. This book keeps you emotionally involved until the end. The plot will keep you guessing the rest of the book. I personally liked this book, because it had a great story line. It was addicting to read, and I was really interested. This book is like a ghost story that never ends. It also has a romance that will last forever, and can conquer all. I recommend this book to all ghost story lovers. I would also recommend it to people who like mysteries, and can stand gruesome deaths.

Published by Thriftbooks.com User , 23 years ago
I think R.L.Stine's 'House of Whispers' is the best book I've ever read. (well I haven't read the new Fear Street Senior series yet, but I will soon!) It's about this really beautiful women with black hair and green eyes. Angelica Fear. She have evil powers and most people say the Fears' are cursed. Angelica's cousin, Amy Pierce doesn't believe that but she is going to stay at The New Orleans, The Fear Mansion because her father was hurt badly in war and her mother went to see how he was doing. Amy senses that something is going wrong in the big mansion and in the end, she is very dangerous.Read this book. All Stine's fans' will enjoy this book. I bet you.

This book was great

Published by Thriftbooks.com User , 24 years ago
This book was a great story of black magic and mystery. It makes you think, do you really know your family, i mean really, really know them? when you go tovisit a family member, most of the time thier house seems strange maybe there are even a couple of rumers about it, but with Amy pierce, there were rumers of unspeakable death, and strange powers, i would tell anyone that likes to read horror books to buy and read this book....soon

This was a great continuation of The Fear Street Saga.

Published by Thriftbooks.com User , 26 years ago
This was a great book about the Village of Shadyside.It was very thrilling when I read it. It made never want to sleep again. If you think you are a Goosebumps fan write to me at my electronic mail adress. But put your adress there not your e-mail adress & gt
Trustpilot
Copyright © 2022 Thriftbooks.com Terms of Use | Privacy Policy | Do Not Sell or Share My Personal Information | Accessibility Statement
ThriftBooks® and the ThriftBooks® logo are registered trademarks of Thrift Books Global, LLC