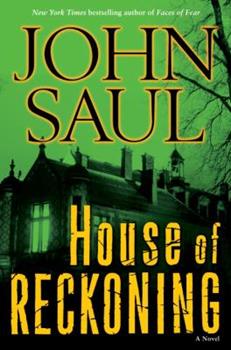 House of Reckoning: A Novel

For more than three decades John Saul has haunted the New York Times bestseller listand readers' imaginationswith his chilling tales of psychological suspense and supernatural horror. His instinct for striking the deepest chords of fear in our hearts and minds is unerring, and his gift for steering a tale from the light of day into the darkest depths of nightmare is at its harrowing best in House of Reckoning. After the untimely death of her mother,...

Not your typical haunted house novel

Published by Thriftbooks.com User , 12 years ago
Just in time for Halloween, John Saul releases what is sure to be a blockbuster of a novel. Saul can never be content to follow the status quo, of course, so he had to created a haunted house that wasn't quite what it seemed to be ... But, of course, if I tell you how it is different, I'll spoil all the fun ... you'll just have to read it to find out more! The main characters are Sarah Crane - who, at age 14, has to grow up fast due to her mother's death. Sarah's father can only find solace in the bottle. To make matters worse, one night Sarah's father gets into a bar fight and when the man he was fighting with is found dead the next day, Mr. Crane is arrested for murder and Sarah is put into a foster home - one which only takes in foster kids for the money and manual labor. Struggling in a school in which she cannot find common ground, she finally finds friendship in Bettina Phillips, her art teacher, and Nick Dunnigan, a former mental patient who still hears voices and occasionally has visions. When all three find themselves in Bettina's ancestral home - Shutters - weirdness begins to occur, and maybe Sarah and Nick can control the fury of the ages and gain control ... and revenge ... Or maybe Nick really IS crazy, Bettina really is a devil-worshiping witch and Sarah is falling under their spell. It could go either way. You know how Mr. John Saul is. Definitely give this one a read. It's loads of fun.

Published by Thriftbooks.com User , 12 years ago
John Saul has had success as a writer of popular horror fiction for over four decades. He has maintained his popularity by continuously applying the elements of horror and conflicted characterization that signifies this genre. With HOUSE OF RECKONING, his latest effort, Saul returns to this familiar landscape and once again features his signature element: the teenaged protagonist. High school student Sarah Crane is lamenting the loss of her mother to cancer six months earlier. This tragedy has crippled her father, Ed, and has forced him to seek solace at the bottom of the bottle. And as if things weren't bad enough, his alcohol abuse serves as the catalyst for two horrific events: the manslaughter of a fellow bar patron during a drunken brawl, and the injuring of Sarah in a drunk driving accident. The former deed places Ed in prison and Sarah in foster care. Sarah eventually is taken in by the Garvey family. Ironically, her foster father Mitch happens to be a prison guard where Ed is being held. The Garveys are staunchly (if not hypocritically) religious, and Sarah does not fit in well there. Furthermore, she must face the constant taunts of her new high school classmates, who mock both her permanent limp and her murderer father. The only student with whom she is able to connect is another outcast, Nick Dunnigan, a delusional schizophrenic. Sarah also finds comfort in an art class, taught by a unique character named Miss Bettina Phillips. Bettina resides alone with several dogs and cats in Shutters Mansion, a place that once served as an insane asylum. In eerie fashion, she is able to channel feelings from Bettina's home, and she begins to paint images of Shutters and some of its less-than-friendly past inhabitants. Additionally, while Sarah is painting these unfamiliar images, Nick is having visions of his own that involve acts of violence and terror stemming from the dark heart of the old asylum. As these events begin to unfold, the Garvey family prohibits Sarah from speaking with Bettina outside of class and labels her a "witch." In similar fashion, Nick's father won't allow Nick to maintain a friendship with his new classmate and forbids his mentioning of Shutters or Bettina. Why do these adults and other members of the town seem to fear Bettina and Shutters so fiercely? What sordid secrets are they trying so desperately to hide? At the heart of the novel is the answer to these questions, as Shutters contains more than just Bettina and her animal comrades. It also houses the history of Warwick, and the town's secrets and sins. The time for "reckoning" is now upon them as Sarah and Nick become the keys to unlocking the strange doors found inside Shutters and learning that not all past memories are benevolent. Although HOUSE OF RECKONING wraps itself up a little too quickly, the journey to the conflicted climax is worth the trip. John Saul is at his best when he gets inside the heart and mind of his teenaged characters, and the team of Sa

John Saul does it again

Published by Thriftbooks.com User , 12 years ago
This is exactly what John Saul readers have come to expect. A fast paced, well written, supernatural thriller. This one is full of evil characters, religious nuts, vengeful teenagers, wicked foster parents . . . everything you could ask for. The novel reminded me a bit of Saul's fourth novel, "Comes the Blind Fury" but I felt this one was better written. This novel is a bit different in that it does not include the trademark John Saul prologue, it simply starts with the main story and plunges ahead. I sort of missed his customary eerie introduction but other than that minor complaint, this is another great one from John Saul. No one writes a horror novel like he does.

Published by Thriftbooks.com User , 12 years ago
Sarah Crane, 14, lived on a farm in Vermont with her alcoholic father. When he has an especially bad episode and kills another man in a bar fight, Sarah tries to go after him via bicycle. Her father accidentally runs over her and cripples her. While Sarah is recuperating in the hospital, her father is taken into custody. An especially cruel guard named Mitch Garvey threatens him and his daughter if he fails to toe some line. Meanwhile, Sarah is taken in by the Garveys, who make no bones about their distaste for taking in a foster child. Angie Garvey repeatedly tells Sarah the only reason they, the Garveys have agreed to take her in is for the money the County is paying them. The Garvey children, Tiffany, 14, and Zach, 16 go out of their way to make Sarah's life miserable. Tiffany even steals Sarah's pain medication to deal to other kids. A kind art teacher named Bettina Philips sees real talent in Sarah, talent she tries to nourish and see flourish. She is considered eccentric by the good townspeople, who have branded her a witch. Bettina's home is a large, crumbling mansion that at one time was an asylum for dangerously mentally ill patients. (This makes one think of the "Blackstone Chronicles.") Bettina sells natural herbs and homeopathic remedies to the very people who condemn her! Sarah's other friend is a boy named Nick Dunnigan. Nick has had mental health issues since early boyhood in that he has auditory hallicinations and violently self-destructive behaviors. Sarah and Nick appear to have some sort of psychic bond with each other and with Bettina. Sarah draws graphic depictions of depravity and horror while Nick's hallucinatory voices speak of incidents long past. The question is DO these two young people have such a psychic bond? Is Nick really mentally ill and are the voices he hears hallucinations or are they working in concert with Sarah's artistic visions? And what of the history of Shutters, a house that appears to yearn for vengeance? And what is Bettina's role in the lives of these two young people and in the history of Shutters? What connection if any do Nick and Sarah have? A deliciously spine-tingling horror tale, John Saul does not disappoint. This book does summon up memories of "Comes the Blind Fury," a story set in 1980 about another young girl who's adoptive father injures her, resulting in limited mobility. Michelle, the 12-year-old girl in "Comes the Blind Fury" draws scenes for a blind child who dictates them to her and Sarah draws horrific scenes that she has no control over, whose subconscious appears to be working with Nick's. Shutters is an interesting creation. The dilapidated old mansion reminds one of the shoe factory in 1986's "Hell Fire." Readers cannot help but wonder about the souls who served time in Shutters and the atrocities that took place in this hellhole cum manse. Sarah, Nick and Bettina are all likable, appealing characters. One cannot help but smile at the epilogue,

Published by Thriftbooks.com User , 12 years ago
I began reading John Saul when his first books were originally publlished and I enjoyed his writing very much. Over the years, however, I just got out of the habit of picking up his books, so the opportunity to review his latest was very appealing to me. This is one of his "typical" (if you can call any of his books typical) works, one that involves teenagers and very scary events. It begins very slowly and builds up to a a very exciting conclusion. Once again, most of the adult characters are clueless as to what is going on around them, and only the protagonist, her closest friend, and a sympathetic teacher have any idea of the evil(?) occurring in a small New England town, and even then the recognition doesn't come until a good part of the book is past. The plot grips you from the beginning and doesn't let go until the very end. At the conclusion, evil is vanquished and punished and good prevails.I won't give any more details because that would spoil any potentail reader's enjoyment of the plot and the shocks that await within the pages of this tremendous thriller. I'm glad to have read this, and John Saul will now be back on my "must read" list.
Copyright © 2020 Thriftbooks.com Terms of Use | Privacy Policy | Do Not Sell My Personal Information | Accessibility Statement
ThriftBooks® and the ThriftBooks® logo are registered trademarks of Thrift Books Global, LLC