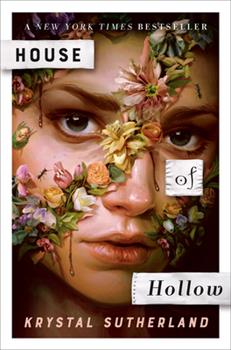 A dark, twisty modern fairytale where three sisters discover they are not exactly all that they seem and evil things really do go bump in the night. Iris Hollow and her two older sisters are unquestionably strange. Ever since they disappeared on a suburban street in Scotland as children only to return a month a later with no memory of what happened to them, odd, eerie occurrences seem to follow in their wake. And they're changing. First, their dark...

Published by KitKat , 6 months ago
Wow! This is most certainly a read in one sitting book! I could not put it down because of all the twists and turns in this gorgeously creepy fairytale! Grey, Vivi, and Iris are absolutely mesmerizing and mysterious, even when I know they are only characters in a story. I think they portray very faelike powers (though it ends up being quite a bit darker than that). There is so much action in this story, from the disappearance of Grey and the search for her (and meeting Tyler who is also cool!) to being on the run from a mysterious character. So many unanswered questions for most of the book though they are answered by the end. Creepy flowers and the secrets of Grey and traveling to even more creepy and haunting places. And the cover is absolutely perfect and gorgeous and matches the Hollow sisters! Their last name is really fitting too and gives the title nice alliteration. I most definitely recommend this book!

Published by gloriizzy , 6 months ago
house of hollow is a ya paranormal / urban fantasy that follows iris hollow, the youngest of three mysterious sisters. when the hollow sisters were younger, they vanished for a month that left each of them with a half-moon shaped scar on their throats but no memories of the experience. as a teenager, iris does her best to blend in & wishes she was normal, but her sister's disappearance sparks a series of events that forces her to confront their shared past & the mysterious oddness that surrounds all three sisters. first of all, can we talk about how gorgeous the cover is!? i love the illustration style & the muted colour palette...okay, moving on. house of hollow is described as a dark fairytale, & i think the book really delivered on that feeling with its lyrical writing style & incorporation of the magical paranormal elements. also, the fantasy otherworld was so wonderfully intriguing and i would totally love to see more about how it operates. the main mystery of the book was also well-written, and it felt like there were so many twists and turns and we were always just scratching the surface, which made me keep on turning the page and guessing, although most of mine were wrong. my favourite character was the eldest sister, grey hollow, who was always shrouded with a perpetual layer of mystery, but i didn't really connect with the main character. iris didn't feel like she was that developed, and felt a bit bland. actually, i also liked her other sister, vivi, and grey's boyfriend, tyler yang, more than iris herself. in addition, i didn't like the main romantic subplot and found it unnecessary. but probably the thing that i disliked the most was that the book decided to kill off tyler (the one token poc character) in a pretty pointless way. the death was handled pretty badly and wasn't all that impactful, and the same exact ending probably could have been achieved while also keeping him alive.

Published by lurkykitty , 7 months ago
The Hollow Sisters are infamous, having mysteriously vanished for a month ten years ago on New Years Eve. The girls have no memory of this time. Social media has sprouted wild conspiracy theories and obsessive speculation. Iris, the youngest sister, has always struggled with her family's weird reputation and her own strangeness. She just wants to be a normal teenager. When her oldest sister, Grey, a famous model and fashion designer vanishes, Iris and the middle sister Vivi, a musician, go looking for her. Their search involves a horned man, a dead body in Grey's apartment, and strange vegetation growing in weird places. As they investigate further the secrets are revealed and the memories start breaking through. It is dark, unsettling, morbid, creepy, shocking, haunting and impossible to stop reading. The writing is descriptive, lush, evocative and compelling. I thoroughly enjoyed reading House of Hollow. It is perfect for those who love dark, horrific, modern fairy tales and is best read going in blind. I am hoping that Krystal Sutherland writes more books in this world and in this genre. Thank you to Putnam books and Penguin Teen for an advanced reading copy. #HouseofHollow @PutnamBooks @PenguinTeen @km_sutherland

Published by CannibalHatter , 7 months ago
I received an Advance Reader's Copy from the publisher in exchange for an honest review. This is a spoiler free review. This book was wonderful! It really took me by surprise. There were lots of twists and turns that kept me guessing. The entire time you are reading this book you have this strong suspicion that something just is not quite right with the Hollow sisters but you can't really put your finger on it. There is lots of action and suspense as well and the dynamic between all of the characters is wonderful. I personally love books that have elements of the supernatural woven in to the real world so that it seems like the scenario that the characters are facing could really be possible. I do appreciate that the climax and everything after did feel like a big pay off and I wasn't left with any pressing questions about any aspect of the plot. The epilogue felt fitting and was satisfying even though it leaves off in a place that can keep you wondering. I certainly recommend this book to anyone who enjoys YA with supernatural, horror, mystery, and suspense elements.

I didn’t love it

Published by Breywar , 7 months ago
This book sounded so promising, a modern day fairytale with 3 sisters. I was actually very disappointed by how much I just wanted this book to be over, Our main character Iris wasn’t great, her sister was missing, she had disappeared for a month when she was younger and she was worried about her grades and going back to school, even when it was between life and death. The other 2 sisters Grey and Vivi were both super famous and everything you would imagine was a perfect life for them. I didn’t see a big connection even though we were told they meant so much to each other. The beginning of this book was super confusing and brought in details that had nothing to do with the actual plot of the story. We don’t need background on the girls grandma when it isn’t relevant to what’s happening. It was extremely wordy and hard to get through. I almost dnfed it a few times. I didn’t like it. I didn’t hate it. Meh,

Published by spellbindingstories , 7 months ago
This was gripping, and despite the fact that I could quickly feel horror creeping over and sinking into my limbs from the first chapter, I could not set it down. The addictive tale follows three sisters, once missing but since returned... that is until the eldest sister, Grey, goes missing once more. What follows is an eerie, fairytale-esque journey to uncover what happened to Grey as circumstances relate to what happened to the sisters in their childhood. Overall, the story’s tone, paired with masterful writing, is sure to captivate readers—hooking them and keeping them reading despite the trepidation of what inevitably is sure to come. Basically, I’m sure I’ll be having nightmares for weeks after reading this one. If you’re a fan of eerie, fairytale horror, this one is definitely for you (though perhaps not so close to bedtime).
Copyright © 2020 Thriftbooks.com Terms of Use | Privacy Policy | Do Not Sell My Personal Information | Accessibility Statement
ThriftBooks® and the ThriftBooks® logo are registered trademarks of Thrift Books Global, LLC