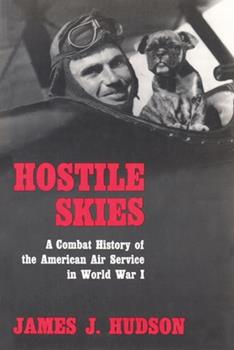 Hostile Skies: A Combat History of the American Air Service in World War I

From April to November 1918, the American Air Service grew from a poorly equipped, unorganized branch of the US Expeditionary Forces to a fighting unit equal to its opponent in every way. This text details the actual battle experiences of the men and boys who made up the service squadrons.

Published by Thriftbooks.com User , 22 years ago
I had the pleasure of being one of Hudson's students, especially when I was able to discuss the pilot on the dust jacket, Capt. Field E. Kindley, of Gravette, Arkansas, one of the first Americans flying in a US unit to shoot down a German. Hudson took great pains to insure the accuraccy of this book, and continued to seek out information about the men and units he wrote about in this book. It is THE BOOK on the fledgling American Air Service, and having been a WWII fighter pilot, Hudson wrote from a pilot's point of view, and was able to discuss the salient points and the bad points of the experiences that these men had and how it shaped the future of our air force. I strongly recommend it to any serious military student.

Hostile Skies a must for any WWI aviation historian

Published by Thriftbooks.com User , 22 years ago
I bought this book on a whim. I'm glad I did. One of the best books I've read on WWI Aviation. Hudson's scholarship is solid. As a former AAF fighter pilot, he ties in his expertise to make Hostile Skies readable and enjoyable. It does not degenerate into an aces' scorecard of kills and losses, but rather includes various units of the Army Air Service--The Balloon Corps, Observation and Bombardment squadrons, and of course Pursuit. Hudson's use of personal interviews and first-hand accounts makes his work an excellent reference for WWI Aviation historians.
Trustpilot
Copyright © 2022 Thriftbooks.com Terms of Use | Privacy Policy | Do Not Sell or Share My Personal Information | Accessibility Statement
ThriftBooks® and the ThriftBooks® logo are registered trademarks of Thrift Books Global, LLC