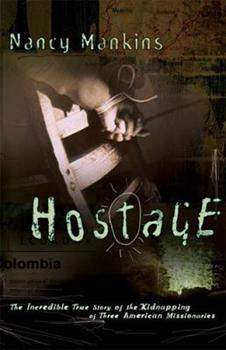 On January 31, 1993, three American missionaries serving with New Tribes Mission in the jungles of Panama were kidnapped by leftist rebels. They were taken to Columbia, only to be used as human pawns by the leaders of FARC, the communist insurgency group who has held them captive for eight years. The United States government transported the wives of the three hostages back home, and has made countless attempts to negotiate on their behalf. During...

Published by Thriftbooks.com User , 12 years ago
This is a wonderful, powerful TRUE story of how God worked in the lives of the author (Nancy) and her co-workers Tania and Patti. Their husbands were kidnapped at gunpoint from the village they were working in as missionaries. It is moving to read how God led them step by step, year by year... as they waited...... something I hate to do, and they were 'forced' to do. Waiting....for news for over 7 years, for news about their beloved husbands.

Hostage is really three stories in one

Published by Thriftbooks.com User , 13 years ago
In 1993 three New Tribes Missions missionaries serving in Panama were kidnapped and ultimately murdered by Colombian guerillas. Nancy Mankins, the wife of one of the victims tells the powerful story surrounding these events. Hostage is really three stories in one: First there is an overview of the ministry that these missionaries had in the jungle tribe where they were being wonderfully used of God. In alternate fashion Mankins weaves the second story, that of the kidnapping and the events that followed. The third story, and the most important, is the honest struggle and triumphant faith of wives and children left behind. The result is a heartbreaking yet challenging account of three little known missionary families that understood that it is no fool who gives up what he cannot keep to gain that which he cannot lose.

Published by Thriftbooks.com User , 17 years ago
This is a heartbreaking tail full of ups and downs. I learned exactly how much I have to be thankful for and how to trust in God even in your darkest hour.

Published by Thriftbooks.com User , 18 years ago
I loved this book! It was intriguing from the start and alternating between the kidnapping and village life was both refreshing and insightful. It's not just faceless facts about an atrocious event. As the book develops you learn to love the families and the Kuna tribe. It was motivating for me to look at the sacrifice of these families and realize how much I have and how much I take for ganted. I would recommend this book.
Trustpilot
Copyright © 2022 Thriftbooks.com Terms of Use | Privacy Policy | Do Not Sell My Personal Information | Accessibility Statement
ThriftBooks® and the ThriftBooks® logo are registered trademarks of Thrift Books Global, LLC