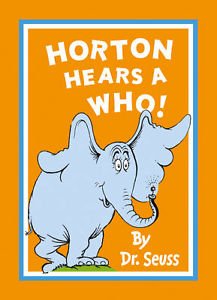 Xhorton Hears a Who Pb

(Part of the Horton the Elephant Series)

This description may be from another edition of this product. Choose kindness with Horton the elephant and the Whos of Who-ville in this 65th Anniversary Edition of Dr. Seuss's classic picture book about caring for others The new matte finish cover and peel-off...

Published by Kunz Readers , 4 months ago
We love our Dr. Suess books and we're excited to add Horton Hears a Who to our collection. My two boys under 4 years old will sit for it and love the story!

Delightful Pop-Up for All Ages

Published by Thriftbooks.com User , 12 years ago
Horton and the Whos leap from the page is this pop-up edition of Dr. Seuss's classic Horton Hears a Who. Horton hears a voice from a tiny dust speck and discovers a whole population of creatures too small for most to see. Determined to see them treated with respect, Horton embarks on an adventure to bring the Whos into the world he knows. Pop-up artist David A. Carter (/Bugs in a Box/ and /Red Dot/ series), remains true to the original text and illustrations when adding a third dimension of movement and kinetic energy to the story. Combinations of lift flaps (hiding even more pop-ups), pull tabs and strings, wheels and five complicated two-page paper structures leap from the page to fascinate and engage readers. Hardcover binding and sturdy pages and cutouts mean the book will stand up to hours of use. With full color and detailed illustrations enhanced by marvels of paper engineering, children and adults alike will discover new things every time they look at a page. Reviewed by Jamie Engle

Published by Thriftbooks.com User , 12 years ago
I purchased this along with the horton blankie from Manhattan toys. The book is wonderful and good quality. My grandson loves it.

The pop-ups are as delightful as the story

Published by Thriftbooks.com User , 13 years ago
This book delights me! The best pop-up I've seen, it combines a story I love with these wonderful little pop-up worlds. This version of Dr. Seuss's story is much more than a simple pop-up book. Many pages have multiple pop-up images. Scenes that include chains or ropes -- such as the one where the Wickersham gang of monkeys try to put Horton in a cage, or when Who bricklayers are hanging off the side of a building -- are created with actual strings that connect the various pieces of paper. Some pages have flaps with more pop-ups inside. There are also pieces you can manipulate -- you can turn the hands on the Whoville clock and rotate a wheel so that a Who repairman hammers a nail. Every element is printed on sturdy paper that's about the thickness of a business card. The result is a feast for the eyes and fingers that will hold up to lots of use. The Dr. Seuss tale is a touching classic, about an elephant named Horton that is determined to help tiny creatures because "a person's a person, no matter how small." David Carter is a master paper engineer, designing 75 pop-up books before this one. For more Carter pop-up gems, here are some great choices: 600 Black Spots: A Pop-up Book for Children of All Ages Blue 2 (Limited Edition): A Pop-up Book for Children of All Ages One Red Dot: A Pop-Up Book for Children of All Ages (Classic Collectible Pop-Up) Birthday Bugs: A Pop-up Party by David A. Carter Tibetan Buddhist Altars: A Pop-Up Gallery of Traditional Art and Wisdom

Published by Thriftbooks.com User , 21 years ago
Horton Hears A Who was about much much more than Horton's predicament. Written in the early 1950's, this story reflected a new way of thinking for Dr. Seuss as an individual, and ran contrary to the grain of much of the sentiment in the United States at the time. During the early 1950's the results of the Marshall Plan were still unclear, and Americans, who had just fought a fierce war with Japan and Germany in the decade before, were debating whether or not to continue with our aid, protection and reconstruction programs. The programs were designed to give our defeated foes a chance to rebuild. They were a brave new experiment. An effort to avoid punishing the populous for its bad leadership. Also, for the first time in history, and effort to love your enemy, in the hopes of making them your friend forever. Many Americans viewed the Germans and Japanese with disdain. They were calling for an end to aid for a variety of reasons, most of which are touched upon in the book. Despite his racially charged characterizations of the Japanese *during* the war, Dr. Seuss was coming to terms with the fact that the general populations of Germany and Japan were additional victoms of the war - simply leftover pawns in a terrible game. Seuss wrote this book in an effort to get the word out that, despite differences past and present, we should try to care about one another just the same. You see:"the Whos down in Whoville on top of that little speck are people,regardless of race,creed-or size!" Dr. Seuss was compelled by the helplessness of these devestated nations, and was issuing an appeal for everyone to start looking at nations as a collection of real people, rather than as a monolithic "other".

Horton the Elephant: A True Hero for Our Time

Published by Thriftbooks.com User , 23 years ago
I suspect that even people who don't know a word of English might enjoy Dr. Seuss's galloping rhythms, precise rhymes, and intricate illustrations of creatures and objects that couldn't possibly exist outside the wonderful, whimsical Seussian universe. But in Horton Hears a Who, the good doctor uses his inimitable talents not only to amuse but to weave a morality tale of surprising profundity. Although Horton is the largest creature in the Jungle of Nool, he alone is sensitive to the needs of the very smallest and most helpless. "A person's a person no matter how small" is a refrain that has rung true with several generations of young readers, and it is a credo that is no less valid today than it was half a century ago. Although Horton is referring to the tiny inhabitants of Whoville, young readers know intuitively that the author is really speaking about them. That children both need and deserve the respect and protection of their elders is a point that is all too rarely made in children's literature. Come to think of it, don't all of need to be reassured once in a while that compassionate spirits like Horton can be counted upon to come forward in times of crisis to protect us from the likes of the gleefully ignorant Wickersham Brothers and the mean-spirited Vlad Vlad-i-koff?

Horton Hears a Who! Mentions in Our Blog 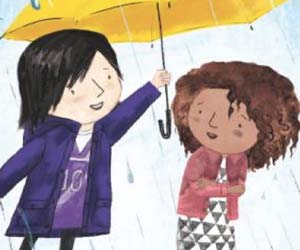 Remembering to Be Kind
Published by Barbara Hagen • November 13, 2020

Kindness is one of the things we learn earliest in life. Learning to say "please" and "thank you." Being respectful. Learning to share. We should all be pretty good at this kindness thing, but when I look around...social media posts, or news stories, or even just observe society around us, it is clear our early education in kindness has fallen by the wayside. On this World Kindness Day, November 13, 2020, let's all take a few minutes and remember some of those early life lessons.