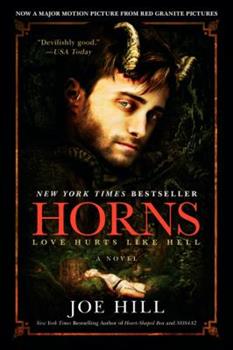 From the New York Times bestselling author of Heart-Shaped Box and NOS4A2 , a relentless supernatural thriller that runs like Hell on wheels . . . Merrin Williams is dead, slaughtered under inexplicable circumstances, leaving her beloved boyfriend Ignatius Perrish as the only suspect. On the first anniversary of Merrin's murder, Ig spends the night drunk and doing awful things. When he wakes the next morning he has a thunderous hangover . . . and...

Published by Rachel A. , 7 months ago
I really liked this one...it started a bit slow, but as more characters were added and more voices were heard, it got better and better as it went along. What would you do if after a drunken night of debauchery, horns were growing from your head? I loved hearing the things people felt free to tell Ig when they saw him, though a couple were heartbreaking. I wish there was a bit more of that. Adding in the perspectives and thoughts of other characters aside from Ig, the main, really gave the book a depth that made it great. The story follows several young people through different times in their lives, and the ending is bittersweet. There’s a little love story snuck in there, too. It flashed around a lot, but it was a read that was hard to put down! A solid story from Joe Hill.

Published by Courtney , 2 years ago
I personally like where the story and plot was going but the more I read the worse it got. It was Predictable. Wich to me is a let down I wanna be surprized, taken on a ride threw out the twist and turns of a book. This was just awful to continue. The ending was the worst I felt it lacked....alot. Hard to say with such a weird ending.

Published by EVELYN , 2 years ago
Joe Hill Is His Father's Son. If You Love Stephen King You Will Definately Love Joe Hill. Awesome!!!!!!!

Published by Audio , 2 years ago
I would be embarrassed if someone turned on my car audio and heard the opening of the story. I am not a prude, but I'm throwing out my audio book. The scenarios are gross.

Published by Thriftbooks.com User , 11 years ago
If I had to pick a single horror novel to introduce someone who has never read horror, to what it was capable of, I would recommend they read Horns. Inside a story of love and death and betrayal are fantastical elements. But the characters are so normal, so "everyday", that the horror elements are even more outstanding (in a literal sense). We think we know what has happened to Ig, Merrin and Lee, but as the story unfolds, and layers are exposed, we learn we weren't quite right and much more was going on. I won't ruin the story, but like Fowles' The Magus, Horns contains surprises, and not all of them are good ones. There is real sadness in this book, and often I was brought to tears by what befell these people. It is a very disturbing story, but a very, very good one. This book will appeal to readers of Laymon, Ketchum, Gerlach and Gonzalez. It has a similar power to Gonzalez' Survivor. Definitely 5 stars--maybe more.

Published by Thriftbooks.com User , 11 years ago
let me start this by saying two things; one, horns is without a doubt my favorite book this year, beating out gaiman's neverwhere and two, it is one of my favorite books ever. --- ignatius parish is a man whose longtime girlfriend is raped, killed, and left near the town of gideon, new hampshire's abandoned foundry. this causes the town to, somewhat naturally, presume that ig killed his girlfriend and he essentially becomes an outcast; untrusted, and, really, lost to his own devices. one day after a binge of drinking ig goes to the place where his girlfriend was killed, passes out, and wakes up with horns on his head. from here things go out of control; ig realizes the horns give him the ability to have people tell him their darkest secrets, and as time goes on ig becomes more attuned to his newly gained powers. on top of this ig starts to unravel the mystery of who really killed his love and starts the process of going after him. i went into the novel thinking it would be a horror novel, but surprisingly it wasn't (at least to me). it had it's moments, and of course a man becoming a devil (the devil? lucifer morningstar?) is completely off the wall, but the book was heartbreaking, exciting, funny at times (although darkly), and just all out amazing. by the end of the novel i really felt for the man who was wrongly blamed, hated the man who killed is only real love, and thought more about what really is moral. what really defines good and evil, what really defines, and drives human nature. one of the best books i have yet to read, to me much better than hill's first novel in 2007 (heart shaped box). i loved the story, loved the way it made me think. thank you joe hill. --- on a related note: i read hill's new short, "twittering from the circus of the dead" (found in the new anthology, the new dead), and although the whole idea of using the 140 character twitter format was odd at first, i really, really enjoyed it. gruesome. this short was, without a doubt, a horror story.

Published by Thriftbooks.com User , 11 years ago
When Ig Perrish wakes up after a night of drunken self-pity, he finds a pair of enormous horns sprouting from his forehead. This is only the first in a series of uncomfortable transformations: people share uncomfortable secrets with him, he can flawlessly imitate other voices, snakes gaze at him longingly and there's even a bit of breathing fire. The demonization of Ig Perrish is only the latest thing to go wrong for him. Ig's been the town outcast for a year - ever since his girlfriend was found raped & murdered on the edge of town. Merrin had just dumped Ig (in public), so the popular sentiment has varied between 'string him up' and 'set him on fire first'. Ig quickly discovers that the horns (and everything that goes with them) aren't a full-on curse, as much as they are a mixed blessing. With their eerie, mind-altering abilities, it doesn't take him long to discover the truth behind Merrin's death. The challenge, however, is in what he can do about it. In Horns, Joe Hill writes a deliciously & aggressively blasphemous book. The town's stockpile of good Christians (including the pastor) are quickly revealed as unpleasant hypocrites. The role of God and prayer are challenged from start to finish - with Ig repeatedly reaching the same conclusion: while God is an absentee parent, the Devil's got humanity's best interests at heart. Perhaps the high point is Ig's own sermon on the mount - at the moment he accepts his fate, he declaims his new vision to an audience of snakes. The speech is tender and hilarious (the Devil is pro-Love and anti-polyester). But the sympathy for the Devil shtick isn't where Hill's true daring comes into play. In Ig, Joe Hill has created an omniscient, omnipotent, invulnerable protagonist. And, yet Horns is neither boring nor predictable. Just because Ig knows everything doesn't mean he's put it all together - he's got the power of the Devil, but the mind of an ordinary guy. The mystery is unravelled one tantalizing piece at a time, culminating in a sequence of genuine surprises and revelations - and one hell of an explosive climax. Horns is an absolutely brilliant piece of work that snared me from the first pages. Initially in awe ("How could this possibly keep up for an entire book?"), I was very quickly absorbed in Ig & Merrin's story. For a book that stars the Devil, this is a very human drama. And for a second novel, Hill's already written his name in the (five-pointed) stars.

Published by Thriftbooks.com User , 11 years ago
Horns, the second novel by Joe Hill, is a great study of revenge and lost love. The novel opens with Ig, who stands accused of murdering his high school girlfriend and love of his life. Ig claims to be innocent, but nobody believes him. He gets drunk one night and falls asleep and wakes the next morning with horns growing from his head. People see him with the horns and tell him their innermost guilty secrets, or they tell him what they think of him, the majority of it being negative. As the horns grow, Ig realizes he can make people do things. Is he turning into the devil? But he is the only true "good" character in the book. From there, the story goes to a coming of age section where the pivotal characters come together for the first time. Ig and his brother Terry meet Lee and Merrin. Merrin and Ig start dating. Hill does a great job with the background and making us care about all of these characters. Midway through, Ig finds clues about what really happened that night. The story unfolds in segments that get into all of the characters' heads and their motivations are explained and each character is strongly developed. The true killer is revealed and dealt with in an explosive and at times touching finale. There were segments of text that were kind of clunky, but then there were points where it was impossible to stop reading. The dialogue was the strongest part and the narrative slowed sometimes during points that were all text. Overall, Hill's style is very smooth and fast paced, and he delivered very tightly plotted, character driven horror novel every bit as good (if not better) than his first novel, Heart Shaped Box.

Published by Thriftbooks.com User , 11 years ago
Ig Perrish wakes up one morning with a hell of a hangover and discovers that he has grown horns on his head. He has become a (the?) devil, has powers and thus opportunities (but also downsides) he didn't have before, and within a short time, he knows just what he wants to do with them - take revenge for a hideous wrong. How best to do it? That's simple enough, an amusing premise for something of a supernatural thriller, but Joe Hill does more than just exploit that - a lot more. First of all, the book is just crazy funny. Hill has a great ear for dialogue, his scenes are often completely absurd and yet somehow believeable, and the situations are, after all, ridiculous on their face, but he makes it all work. Second, his plotting (for such a strange book) is tight. The heart of the book is something of a murder mystery, and Hill uses flashbacks from various characters to good effect, putting the pieces of the puzzle in place in a pretty clever way. Third, there is something more than just a wild ride for his characters here - there is actually a touching love story, and the revelations behind various motivations and actions are really well done. The last 50 pages or so, and especially the last 20, are in fact just downright intimate - and all without seeming mawkish or losing the flavor of the very strange ending. It's a crime story, a horror story, a love story - frankly, it's a lot like something Steven King would have written 20 years ago. It's excellent.
Copyright © 2020 Thriftbooks.com Terms of Use | Privacy Policy | Do Not Sell My Personal Information | Accessibility Statement
ThriftBooks® and the ThriftBooks® logo are registered trademarks of Thrift Books Global, LLC