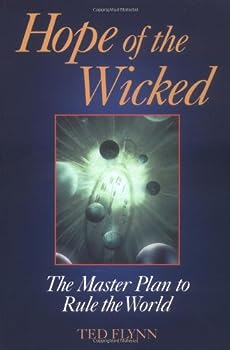 Hope of the Wicked: The Master Plan to Rule the World

Many well-intentioned people these days look to the realm of politics for the solutions to the many and diverse societal problems facing the world. They believe that if only they could get good people... This description may be from another edition of this product.

Towards A One World Government, Army & Religion.

Published by Thriftbooks.com User , 19 years ago
This book will shock the average person. It will even shock those who have some experience in studying Biblical prophecy and who will be familiar with the future rise of the Antichrist and the creation of the "Mark of the Beast". A mark in a person's right hand or forehead which seals allegiance to a future leader and without which no-one will be able to buy or sell. (Revelation ch.13;v16).It will shock because it reveals that most people still live in ignorance of how close we are to such a situation. Although not a "religious" book, some references to Scripture are made which make the relevance of what is being discussed here even more relevant to our times.At the outset the book describes itself as not being "a walk in the park on a sunny day". It certainly is not. The contents will cause you to question all the news that you view on television, listen to on the radio or read in the newspapers. The book confirms that you will henceforth question the news & relative information in a new and more penetrating manner.The book reveals how most people indeed form their opinions and their attitudes, together with their opinions on World events from the information that they obtain through the news media. Few understanding that almost every news organisation is controlled by a "global elite" that has actually been conditioning you without you even knowing it. The news being selectively controlled and reported with a view towards that goal.The book demonstrates the speed and efficiency in which we are being pushed towards a New World Order, a One World Religion, where conformity will be mandatory, together with a loss of national identity/sovereignty and even a World Army. Each issue is studied with many references and sources being quoted.The manipulation and abuse of technology is examined. An example is given on page 230 which refers to a recent film entitled "Enemy Of The State" which painted a nightmare picture of the potential for the abuse of the increasingly advanced digital information structure which enables our movements, purchases, communications and location to be monitored. Personal identity cards and personal micro-chips being implanted in the right hand or forehead are examined, together with the information that could be contained. A filed patent for the latter is even illustrated in this book. The application of personal global positioning systems are also mentioned. The implications are enormous.The book declares that George Orwell's classic & prophetic novel "1984" and "Big Brother" is nearly upon us, with the prospect of the abolition of all forms of privacy.Many might accuse this book of scare-mongering. Each individual must form his/her own opinion. What the book does provide are many references for the reader to do just this and at the very least provide the reader with an awareness of what may be going on behind the scenes in the EU, UN and the many World systems to which the average person has little access.

So why doesn't anyone seem to care.

Published by Thriftbooks.com User , 21 years ago
Another great uncovering of the people and plans behind the eventual deconstruction of the United States and its morphing into some new age utopia under the despotic rule of the United Nations. Those who need convinced should read this. It is more fact filled than any other source on this subject. Those who are aware but who need the footnotes and the sources to support them when they try to discuss this issue with skeptical friends will find this an invaluable reference. The real mystery still remains. With so much evidence now available to even the casual observer, why doesn't anyone care?

The End is NEARER THAN YOU THINK.

Published by Thriftbooks.com User , 22 years ago
The end is nearer than you may have thought. Mr. Flynn has laid out the history of the past and present "One Worlders" in concise detail. The history is interesting but the chapters behind the pictures section is really earth shaking. He details how all the paperwork is all in place to change America from a citizen participatory republic into a Dictatorship almost over night and with the entire force of the federal government behind it. The paperwork is all in place to do so, even tho you will not find out about it until too late. Congress does not even have oversight over FEMA which will be the overseere of our doom. When congress has asked questions or demanded information they have been put off by "Nationl Security clains". Most of the financing for FEME is under the black part of the CIA budget. This will be accomplished by Martial Law Declaration and then FEMA will take over and just do their job. will all be done by those we have allowed to be put in place by Presidential Appointments not elected officials. Some of them do not even know the result of what they will be required to do as so many in the past have said, "I was just following my orders." It was not a good defense after WW2 and will not be one when the Genie is out of the bottle. I cannot see that there will even be a chance for them to be questioned. I highly recommend this book to all patriotic americans who wish the present to continue because we have a lot of One Worlders among us and they have some very different plans for Americas future. WAKE UP AMERICA!!! Believe me tha end is nearer than you think!!!

The best book on the Real History and Conspiracy Plans

Published by Thriftbooks.com User , 22 years ago
I just finished reading this treatise on the coming New World Order. When I ordered this book, I was reading Rule by Secrecy by Jim Marrs. Side by side, Hope of the Wicked is much the superior of the two. "Secrecy" gradually fades after the mid-point and loses credibility with extraterrestrials, etc. and is devoid of a theological or metaphysical orientation, while "Hope" builds to a coherent but sobering conclusion about the near future and leaves us only with the theological virtue of Hope. One of my interests is Freemasonry, Knights Templar and conspiratorial topics. My reading has been part of my many years long research into the "strategic implications" of these organizations. I have read Malachi Martin, Dr. John Coleman and many others who describe the diabolical plot to overthrow western civilization, Christianity and the Catholic Church. Lucifer is definitely their leader because, as mentioned in this book, the plan and execution is supra-human. I live in San Diego. I live within earshot of a submarine base (I hear taps every night) and I gaze from my front living room upon the white rows of tombstones at Ft. Rosecrans National Cemetery on a hill in the distance. It hurts my spirit (I am also a Vietnam era veteran), to know that the sacrifices of my grandfather (WW1), father (WW2), friends and many, many brave men were the manipulations of craven politicians using the patriotism card to further along a centuries old conspiracy against humanity. I have also spent hours at Civil War battlefields and at Arlington, totally taken by the bravery of men fighting for the American Ideal. It is hard to believe it was all for naught. However, perhaps it was always this way. The Spartans at Thermapolae, the Poles at Vienna, the French at Austerlitz, etc, all died in a cause that did not last but a few years after their victories. Our real focus should be the Kingdom of God. Governments and other earthly institutions are temporal by nature and we sometimes put too much faith in them. But, with all that said, it is hard not to feel profound sorrow at the quick passing of a Noble Experiment. Upon finishing this excellent book, I had a premonition of what St. Augustine must have felt when the Roman Empire was crumbling around him and the Vandals were at the gate of Hippo, as he lay dying. The dark hell he must have foreseen for civilization and Christianity, must have been very similar to our own visions of the near future with the godless New World Order. The NWO may turn out to be a modern Tower of Babel (its demise is in the design and foundation) and may cause much destruction in its time. The current rot of civilization (like late antiquity) must be cleansed before a new structure can be established. The Lord of History works in strange ways and uses his chosen instruments, whether good or bad. But it will pave the way for a future that we (like Augustine) cannot envision in the

Published by Thriftbooks.com User , 22 years ago
One of the most incredible books I have ever read. Information is astounding and very well documented, with over 1,000 footnotes. Hope of the Wicked explores the convergence on a global basis of multi-national corporations, foundations, and the political and sociological instruments of a one-world government to bring a New World Order. The book is packed with hundreds and hundreds of quotes from world leaders themselves showing where they want to bring the world. I found out about: the role of the United Nations, Executive Orders, the Trilateral Commission, the role of the Federal Reserve and who owns it, the Bilderbergers, etc., etc. I highly recommend this book for anyone who wants to really know what is going on in the world today.
Trustpilot
Copyright © 2022 Thriftbooks.com Terms of Use | Privacy Policy | Do Not Sell or Share My Personal Information | Accessibility Statement
ThriftBooks® and the ThriftBooks® logo are registered trademarks of Thrift Books Global, LLC