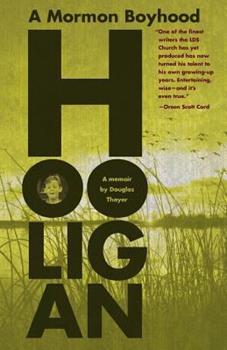 In the days before sunscreen, soccer practice, MTV, and Amber Alerts, boys roamed freely in the American West--fishing, hunting, hiking, pausing to skinny-dip in river or pond. Douglas Thayer was such a boy. In this poignant, often humorous memoir, he depicts his Utah Valley boyhood during the Great Depression and World War II. Known in some circles as a Mormon Hemingway, Thayer has created a richly detailed work that shares cultural DNA with Frank...

Published by Thriftbooks.com User , 13 years ago
This is a fun book that talks about life in small-city Utah in the 1910s and 1920s. This author has a very warm, flowing style that adds a lot of fun life and nostalgia for the time when he could easily wander the streets as a harmless hooligan. There were a lot of implicit rules that boys of that era followed, and Douglas Thayer spells out those rules in a way that makes you feel as though you were really there. Although life was hard growing up, he didn't really notice because of the freedom and safety that his era allowed.

Recommended for a pleasant and leisurely stroll down memory lane.

Published by Thriftbooks.com User , 14 years ago
Hooligan: A Mormon Boyhood is the memoir of author Douglas Thayer, a.k.a. "Mormon Hemingway", who grew up in Utah Valley during the Great Depression and World War II. Brimming with nostalgia for an era when life was simpler, and boyhood was filled with mysteries, delights, and dreams, Hooligan is a cheerful tale of adventure and surprisingly ingenious pastimes. "The best material for a hand grenade was the dust from a vacuum cleaner, wrapped in toilet paper and tied with a string. The idea was to hit the enemy on the head so the hand grenade exploded and blinded him temporarily. This was hard, but it could be done. The effect was well worth the effort." Recommended for a pleasant and leisurely stroll down memory lane.

Of Mice and Boys

Published by Thriftbooks.com User , 14 years ago
Childhood is rich with feelings and with things; ideas come later. The "hooligan" of Doug Thayer's memoir has few ideas, most of them gleaned from adults and skewed because who can understand grown-ups anyway? ("Stark naked" is worse than "buck naked," but why?) The feelings and the everyday things are his own, however, and given to us with a richness and a clarity readers will treasure. It's all here--from the chores a boy must finish before he can burst out into the day, to the underwater wonder of swimming (buck naked) with the fish he can emulate if not yet catch. Comparisons to Twain's Tom Sawyer are inevitable and appropriate; in addition, I keep thinking of Thornton Wilder's Our Town and The Happy Journey--simple narratives that include "nothing less than everything": family life, food, work, nature, the stars, sickness and health, death and faith, sexuality, mystery, war--and all of it offered up in immediate, boy-sized images. (The hand-made slingshot, the ice pan beneath the ice box that required more tending than a young puppy, the indignities of the doctor's examination.) This book is a gem: months after reading it, you will remember some detail with such fondness and clarity you'll think it was a memory of your own. To make a work both universal and unique is the epitome of art, and with this book, Douglas Thayer has achieved just that.

Published by Thriftbooks.com User , 14 years ago
This book could have been written easily about anyone. It shows how things have changed over the years and the usual rites of passage growing up.
Trustpilot
Copyright © 2022 Thriftbooks.com Terms of Use | Privacy Policy | Do Not Sell My Personal Information | Accessibility Statement
ThriftBooks® and the ThriftBooks® logo are registered trademarks of Thrift Books Global, LLC