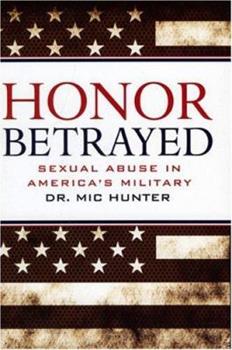 Presenting first-person accounts, the author of Hope and Recovery probes beyond the headlines to reveal the reality of sexual abuse in the military.

A Most Informative Book

Published by Thriftbooks.com User , 12 years ago
Honor Betrayed is quite an informative book, but also a bit of a difficult read. It is not difficult because of the "taboo" subject, rather, because of the wealth of information provided that brings this subject into the spotlight. It's difficult to "take it all in!" Dr. Hunter deals with this topic with understanding and compassion. Because of the amount of evidence provided, the subject of sexual harassment and abuse is overwhelmingly and irrefutably documented and validated by both men and women of all branches of the military, going back to incidences of honor betrayed before WWII and outlining those that are reported still during the present wars in Iraq and Afghanistan. Do you deny that harassment and abuse occur? Do you deny that it happens still, today? Do you deny that it could ever occur to you? Or you? Think again! Honor Betrayed: Sexual Abuse in America's Military

MST: Not a silent word anymore

Published by Thriftbooks.com User , 12 years ago
This book has the most insightful information on the market. It doesn't sugar coat anything nor does it sound like a fictional novel. This is a great tool for survivors of MST so they can have some sort of idea of the mentality of the rapist/assaultist. The mentality is far different than civilians. The "hypermasculinity" is the difference. It's very understandable if you're faced with sexist comments or actions frequently, if not daily, since female don't usually fit that title of being hypermasculine. Even men are "dealt with" by their peers. They suffer as well with PTSD/MST. The statistics named throughout the book are staggering. Again and again it's proven that there is a big difference and lists some solutions. This is hardly a textbook but so helpful for those who are survivors or friends and family. Military sexual trauma is not a new issue of course, since this has gone on way back to WWII or further, but has become increasingly a problem in today's Iraq war. Women are coming forward from other wars who have dealt with MST--before it was even given a name. This book could be a great tool for veteran facilities to use. With increasing vets coming from the Iraq war who have been raped, this book can help along with PTSD therapy. Any survivor or friends/family should DEFINATELY read this book.

Essential Reading for all Americans

Published by Thriftbooks.com User , 14 years ago
Oath Betrayed: Torture, Medical Complicity, and the War on Terror ----------------------------------------------------------------------- This is an extraordinary book. The topic itself is taboo. Dr. Hunter's examination of it is broad, thorough, and covers a great range of topics, from incentives for enlisting to domestic violence in military families (five times higher than civilian settings), domestic killings, the role and treatment of women in today's military, homophobia, sexual harassment, sexual assault, military leadership, etc. While mostly focused on the US military it does discuss some issues with Canadian military and presents some research on the military of other countries. Dr. Hunter takes you inside traditions and practices which may be unfamiliar and shocking. No holds are bared when he examines military slang, most of which cannot be repeated here because of vulgarity. Even having treated veterans for many years, I was not prepared for some of this content. This book confronts a great many myths with research data. Dr. Hunter notes that even the Pentagon acknowledges that many male veterans acknowledge having been sexually assaulted by their comrades in arms - and also notes that contrary to popular belief, the vast majority of such male victims are heterosexual. A full 28% of female veterans who were surveyed reported that they had been assaulted while serving their country. Dr. Hunter reviews data and dozens of case examples - some well-known cases, and some which did not receive much publicity. The issues of hazing and indoctrination are extremely shocking. Having treated veterans of a number of wars and also having worked with sexual and other types of abuse for 40 years, I was surprised and shocked by a number of these. Even extensive experience working with victims was not adequate preparation for some of these stories. The examples ranged from those in military academies to those in basic training and service situations. "When future Army Chief of Staff George C. Marshall attended the Virginia Military Academy, senior cadets ordered him to squat over a bayonet until his knees buckled and he fell on the blade, cutting him and scarring him for life. In 1983, at the Air Force Academy, first-year cadets were ordered to run up and down flights of stairs wearing winter clothing until exhausted, to the point where 139 cadets needed medical treatment for dehydration and some had to be hospitalized." Dr. Hunter explores the impact of sexual assault, sexual harassment, hazing, and other aspects of service using research data, case examples, and some cases which have been litigated. Tailhook and other cases are reviewed and their eventual outcomes examined. He also examines torture, harassment of prisoners, and other forms of brutality - from Me Lai to Abu Ghraib. "An event has happened upon which it is difficult to speak, and impossible to remain silent" Forgiveness Memorial, Duluth, Minnesota "I came home, No scar
Copyright © 2020 Thriftbooks.com Terms of Use | Privacy Policy | Do Not Sell My Personal Information | Accessibility Statement
ThriftBooks® and the ThriftBooks® logo are registered trademarks of Thrift Books Global, LLC