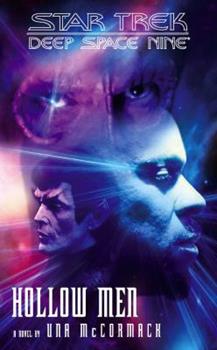 At the turning point of the Dominion War, Captain Benjamin Sisko, facing certain defeat by the overwhelming and relentless forces of the Dominion, initiated a secret plan to secure the aid of the Romulans, the Federation's longtime adversaries. What began as a desperate attempt to save lives became a descent into an abyss of deception, moral compromise and outright criminal acts, as Sisko became compelled to sacrifice every ideal he believed in -...

Published by Thriftbooks.com User , 16 years ago
Hollow Men, by Una McCormack, is one of those "love it or hate it" types of novels. It's a Star Trek: Deep Space Nine story that takes place during the series itself (as opposed to afterwards, as the latest DS9 books have been). In the series episode, "In the Pale Moonlight," Captain Sisko had to go against all of his ethics in order to trick the Romulans into joining the Dominion War, as the Federation was losing. The situation spiraled out of control until he was guilty of countenancing murder in order to get the job done. Hollow Men is the aftermath, and it's told in McCormack's normal style. Not many "events" occur, and the book lives or dies on whether you believe in (and are intrigued by) the characterizations and the internal aspects of the plot. Me? I loved it. But your mileage may vary. After the events of the television episode, Sisko is on his way back to Earth to attend a conference, the first one that the Romulans will be a part of. Starfleet Intelligence wants Garak, the Cardassian tailor and ex-spy who performed most of the skullduggery, to come along. Sisko is being eaten up by guilt for his actions, trying desperately to justify them internally but hating himself more and more, and this carries over to Garak. Garak, of course, is concerned that Sisko will break and confess everything, and he's certain he's going to end up in a Federation prison. When they get to Earth, however, they get wrapped up in more intrigue, as an ex-starfleet officer turned peace activist becomes even more important to the entire war effort, and secrets that should never be revealed are in danger of coming out. McCormack is the author of the Cardassian story in The Worlds of Bajor: Volume One, which I happened to love. Her characterization of Garak was dead-on in that story, and she captures him very well in this one too. His sarcasm and general wit are evident, but we also see his cunning and his intelligence. When he gets wrapped up in the Starfleet Intelligence plot, he is determined to follow his own path to finish the job, and he will even refuse to do the job if he doesn't like what he finds out. He's calm under pressure, he knows what torture is like and so is ready when he's about to be on the other end of it than he's used to. I especially loved his reactions to the peace protests when Sisko takes him to one of them. He honestly can't believe that such a protest would be allowed during war time, and thinks back longingly to the days on Cardassia where stuff like this would be stamped out immediately. He has plenty of traditionally Garak quips. Basically, if you like Garak, you should love this book. Sisko's guilt is also extremely well done. Even better is his reaction when he doesn't get the reaction he quite expected upon revealing what happened. He searches desperately for something to salve his conscience, and while this might seem out of character for the Sisko we know, to me it seemed realistic for a man who has tran

Published by Thriftbooks.com User , 16 years ago
As a major fan of DS9 for over a year and a half now, I've had the chance to read a great many DS9 books and this is undoubtedly one of my favorites. It meshes current day topics with all the flare and suspense that Star Trek has to offer. It continues on the highly-rated 6th season episode, "In the Pale Moonlight", bringing up alot of questions and theories that were presented after that episode and the effects on the series it brought about. Among my favorite characters, Elim Garak, is a main character and he's presented beautifully here. Una McCormack is one of the very few authors I find to be able to write Garak properly (besides Andy Robinson and the screenwriters themselves), and she does so in a great manner. He's such a complex character and that makes him very hard to tie down in a book. I'm glad to have found one that does just that and takes it one step further. Undoubtedly, the best part of "Hollow Men" is the subtext of both current and possibly future issues. Almost every angle of each story is presented with proper analogy and explanation while still staying true to the characters and the plot; you never get the feel that the anti-war protestors that Garak and Sisko meet have anything to do with the Iraq War or any other military crisis threatening our time; you only get a handle on what their opinions and thoughts are. All in all, I enjoy this book, am glad I bought it, and won't be putting it down any time soon.
Trustpilot
Copyright © 2022 Thriftbooks.com Terms of Use | Privacy Policy | Do Not Sell My Personal Information | Accessibility Statement
ThriftBooks® and the ThriftBooks® logo are registered trademarks of Thrift Books Global, LLC