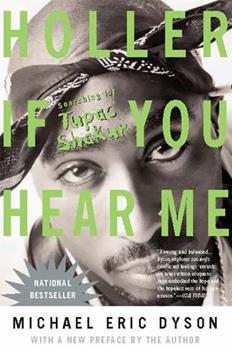 Holler if You Hear Me

Acclaimed for his writings on Malcolm X and Martin Luther King, Jr., as well as his passionate defense of black youth culture, Michael Eric Dyson has emerged as the leading African American intellectual of his generation. Now Dyson turns his attention to one of the most enigmatic figures of the past decade: the slain hip-hop artist Tupac Shakur. Five years after his murder, Tupac remains a widely celebrated, deeply loved, and profoundly controversial...

Poet of the modern time.

Published by Thriftbooks.com User , 19 years ago
Nothing comes easier than talk about about what art needs: first of all, it is always arbitrary; second, it just provides theme for philosophizing, and furthermore relieves us of the obligation that not everybody is up to - gratitude for what it is. What a wonderful book this is. A book instantly animated by the breathing of all cultures. So far no one has spoken of Tupac as Dyson does. His words don't simply signify an object or a life, but freely choose and hover freely, like a soul around a body that has been abandoned but not forgotten. Dyson's penetrating gaze goes beyond the biography of Tupac Shakur, it defines the unity in the whirlpool of his life, proposes to us a doctrine of the systematization of phenomenon. The air of this book calls for a flight. Thank you Mr. Dyson.

Published by Thriftbooks.com User , 19 years ago
In "Holler If You Hear Me," Micheal Dyson developes a critical analysis of legend rapper, Tupac Shakur. Dyson is well known as an intellectual scholar of hip-hop culture. "Holler" is not a formal biography of Tupac, but moreso an extended essay that attempts to place the life, music, and contradictions of Tupac in a cultural, political context. He explores Tupac's work and life in context of his relationship with his mother, a former Black Panther Party member, and as a youth growing up in a post-Black Panther Party era. Tupac's experiences living in poverty with a drug addicted mother certaintly sheds serious light on his work and lifestyle. Dyson helps us understand more clearly Tupac as an artist whose life and work was full of love for Black cultural life, but also as a tortured brotha who, like many men, got drawn into a machismo, sexist world. In essence, Tupac, writes Dyson, adopted "a creed that at once reflected his fractured home life and affirmed his essential aloneness and his combativeness with the universe he inherited, a stance that captured the domestic alienation of millions of other black youth in his song "Me Against the World."Personally, I've always had a problem with Tupac's ganster lifestyle and performance. I always felt that because he was looked up to by so many young people that he should have been a better role model for the hip-hop generation. But in reading Dyson's book, I discovered more about Tupac. First off, I didn't realize that he was so well read--that he read widely and continously: authors inlcuding Richard Wright, Gabriel Marquez, Carl Jung, Alice Walker, feminist Susan McClary and Robin Morgan, and George Orwell. He listened to all types of music, and he reflected deeply about God and spirituality. These literary and spiritual experiences and quests had a great influence on his own work.Dyson also points out that Tupac's "stirring raps made many people see suffering they had never before acknowledged. It helped many desperately unhappy young people reclaim a sense of hope and humanity." Pac was rapping from the bottom (from the oppressed and exploited masses), but he did so from a artists point of view. Thus, if we're disturbed by his contridictions, we have to remember that much of his torment as an artist comes out of a racist, class divide in this country that has essentially marginalized and attacked young people--especially African males. Dyson's book is not the definitive work on Tupac, but he certaintly raises critical questions and analysis that will be useful in present and future studies of this hip-hop icon.

Published by Thriftbooks.com User , 19 years ago
In Michael Eric Dyson's new book, "Holler If You Hear Me: Searching for Tupac Shakur" the life and longevity of rap legend Tupac Shakur is the subject of extreme critical analysis. Through several candid interviews with those who knew the infamous rapper best, Dyson attempts to paint a portrait of the controversial rap artist. Tupac has been coined by the Long Beach Arts, Entertainment and Literary Review as "A prolific genius that emerged from the ghetto to enlighten presidents, principalities and oppressive forces in our society about the injustices of the hood." According to Dyson, Tupac was a powerful force that could quote Shakespeare one minute and curse police brutality the next. Dyson's work is particularly significant in that he is actually documenting the history of a hip hop legend that we should never forget. The struggles that Tupac Shakur spoke about in his music, are still just as relevant today. We should never forget the rapper who gave a voice to those who otherwise never stood a chance at being heard. Dyson's work clearly documents prolific genius at it's best.*The Long Beach Arts, Entertainment & Literary Review

Published by Thriftbooks.com User , 20 years ago
I purchased this book because I was intrigued, but admittedly hesitant, about Tupac Shakur's life. I knew the bare outlines of his life and work, but this book enlightened me about Tupac Shakur's complex views and complicated journey to maturity. I was astonished with the things Dyson revealed, such as Tupac's voracious reading habits and his extraordinary compassion. But the most riveting feature of Dyson's compelling book is his discussion of Tupac's religious beliefs, about which I knew relatively little.This is a beautifully written book, always a surprising feat in an academic. But Dyson is no dry-to-the-bones writer. His style is engaging, his prose clean and elegant. I was surprised by Dyson's explorations of a host of subjects that are central to Tupac Shakur's life, such as racial identity, gender relations, religious beliefs, and death, all of which have a strong impact on many people besides the dead rapper.If you are interested in learning about hip-hop culture and the black youth who are its primary creators, this book is necessary. Like one of the endorsements said on the back of Dyson's book, this book will in short order be considered a classic of its kind.

Published by Thriftbooks.com User , 20 years ago
This is by far the most brilliant, insightful, cutting-edge treatment of Tupac and hip-hop culture available. Dyson doesn't offer a biography per se, and no one who is familiar with his equally impressive work on Malcolm X or Martin Luther King, Jr., would expect such a work. Dyson is helping to pioneer a distinctive new genre of scholarship: a seamless fusion of critical evaluation of an icon's life and a searching examination of that person's life and times. As such, this work takes its place as a sophisticated, meditative and scintillating tour through the dark passages of Tupac's complex music and his surprisingly nimble mind.The way Dyson sets the book up is compelling: He looks at Tupac's childhood, his mature artistry, and the beliefs that motivated his most thrilling achievements. I appreciate his joining Tupac's difficult childhood -- including his mother's drug abuse -- to both the political aspirations of a troubled revolutionary career (his mother was a Black Panther) and to the plague of poverty that cursed them. Dyson then convincingly links these stark realities to Tupac's plentiful and brooding music, and to the themes that would obsess him: death, betrayal, hopelessness, the search for forgiveness, spirituality, transcendence, racial authenticity and thug life.Dyson manages, in the process, to not only write about Tupac, but about the heartless vicissitudes that haunt millions of black youth. His discussion of the "n" word controversy is brilliant, as are his examinations of the contradictions that pile up around "keeping it real," the mantra of so much hip-hop culture. He tackles gender problems (in a gem of a word coinage, what he terms "femiphobia," which is simply illuminating for the way it manages to pry a space between old-style misogyny and outright sexism), while also dealing with Tupac's bold religious views. Dyson's chapter on Tupac's sense of embodiment is one of the most lyrical in the book, although it virtually sings throughout. Dyson is one of the few world-class scholars -- and in this regard, he is nearly in a class by himself -- who is capable of both rigorous analysis and poetic declaration.What is particularly winning about Dyson's book is the list of "firsts" he manages to accumulate: the first time we hear a prison interview he gave; the first time we hear about a video of the rapper when he was only 17; and the first time we hear from a variety of cultural and social commentators (there are over 60 original interviews in the book, if I counted correctly, including the likes of Quincy Jones, Stanley Crouch, Mos Def, Toni Morrison, Afeni Shakur, Common, Talib Kweli, Samuel Jackson, and Jada Pinkett) on the life of this most extraordinary young man.One of the most amazing things I learned -- and there are many features that fall in this category -- is the utter intelligence that characterized Shakur's life. Dyson devotes an entire chapter to outlining the rapper's reading, and that alone is worth the price o
Copyright © 2020 Thriftbooks.com Terms of Use | Privacy Policy | Do Not Sell My Personal Information | Accessibility Statement
ThriftBooks® and the ThriftBooks® logo are registered trademarks of Thrift Books Global, LLC