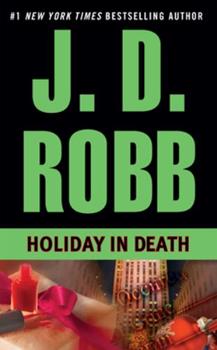 Lieutenant Eve Dallas tails a serial killer who has a passion for the Twelve Days of Christmas in this novel in the #1 New York Times bestselling In Death series. No one likes to be alone during the holidays. For New York's most posh dating service, Personally Yours, it is the season to bring lonely hearts together. But Lieutenant Eve Dallas, on the trail of a ritualistic serial killer who likes to dress up as Santa Claus, has made a disturbing discovery:...

Published by Gina , 2 years ago
I ordered a total of 5 books, we recieved 4 of them...of course the one that is missing is the 4th book of the series (I have finished the first 3 and had ordered books 4 -8). When checking the status and tracking keeps telling me it was shipped to Canada from Jamaica, but nothing since mid August!

Published by Thriftbooks.com User , 17 years ago
The Holiday Season is not all joy and celebration because in the year 2058 a woman is found murdered and left with a figurine showing "partridge in a pear tree" (The Twelve Days of Christmas). Lieutenant Eve Dallas is quickly summoned to the scene and becomes the primary investigator in the case. The killer's modus operandi is to knock at the victim's door dressed up in a Santa's costume and kill them after getting access to their house. Eve quickly finds a connection to a dating agency called Personally Yours that will lead to some very interesting developments. Confirmation comes when a second victim is found; she has two turtle doves in her hair and has also requested the services of Personally Yours. And as the investigation progresses, we find Charles Monroe, a character who we met in the first book in the series, "Naked in Death", and who has also been using the services of the dating agency even though he is a licensed companion. I think Robb made an excellent decision in reintroducing Charles in the series, since he brings no small amount of smart comments and interesting personal interactions with Eve and Peabody. Peabody, Eve's aide, is having the time of her life, because the search for the killer is taking the duo around town where they have a chance to visit shops and mingle in the crowd of holiday shoppers. Eve, on the other hand, hates the experience and besides being worried about finding a dangerous killer, has to deal with her personal issues regarding Christmas. She even has to figure out what to buy for her friends and husband, the billionaire Roarke. Finding a present for a man that has everything is no small task! This series is moving ahead full steam, with interesting cases and characters that are becoming more complex and fascinating. I think the latter aspect is what I enjoy most about this series, since Robb spends a fair amount of time on the relationship between Eve and Roarke, Eve and Peabody, etc. For those of you that have not read other books in this series, I am fully confident that this book stands on its own, but you will be missing a considerable part of the appeal found in these books due to the relationships among the main characters. My recommendation is that you start with the first book in the series, and I guarantee that you will be hooked after that.

Published by Thriftbooks.com User , 19 years ago
This book was very well written and kept me on the tip of my toes from beginning to end. It was the first of the series I read and it left me craving for more. Most of the time when I read a book that has a murder mystery plot I figure it out long before the detectives, but it kept me guessing right up until the end. I LOVED IT and you will too.

Even the Holiday Season attracts Killers....

Published by Thriftbooks.com User , 21 years ago
Holiday In Death is another great addition to this thrilling series. Not only is it Eve and Roake's first Christmas together but there is a serial killer running around. A serial killer who dresses up like Santa Clause, is very neat and tidy and uses "The Twelve Days of Christmas " as his theme. The suspense in this series just keeps getting better. I never know the "who done it " until the very end. This is an excellent installment.

Holiday in Death another great addition to the series

Published by Thriftbooks.com User , 21 years ago
The "...in Death" series by J.D. Robb continues with the holiday season and a serial killer on the loose. The killer uses the Christmas carol, "The Twelve Days of Christmas" as his theme for the murders and leaves with each victim a partridge in a pear tree at the first murder scene and two turtledoves at the second scene. Eve discovers that the murderer dresses up as Santa Claus to gain easy entry by the victim.As in the other books in the series, the spicey romance between Eve and Roarke is a pleasant diverstion from murder and mayhem.The book is fast paced and holds the readers interest. If you haven't read any of the other books in this series, start with Naked in Death and read them all. It's a terrific series that will have you waiting and anticipating the next book.

Published by Thriftbooks.com User , 24 years ago
I've been a big fan of this series ever since the first one, Naked in Death--and ordinarily l don't like romance novels. These intrigue me.I was a little worried after Vergeance in Death that Robb had lost her steam. (I'm sorry, I just can't buy that Whitney and the police chief buy Eve's story about the seral killer that covers up Roarke's true involvement in the earlier deaths.) But that may be a minor quibble. She's back at the top of her form here. A good story with a nice twist. And I was glad to see Charles Monroe again. Maybe w/ a little competition, McNabb will get off the dime about Peabody.Only down side -- nearly a whole year before the next one. Bummer!Note to the author: At some point, Eve and Roarke have to end the honeymoon. It would be nice to have them have some serious difference of opinion and then work it out.
Trustpilot
Copyright © 2022 Thriftbooks.com Terms of Use | Privacy Policy | Do Not Sell or Share My Personal Information | Accessibility Statement
ThriftBooks® and the ThriftBooks® logo are registered trademarks of Thrift Books Global, LLC