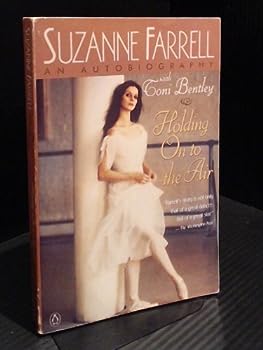 Holding on to the Air

by Suzanne Farrell and Toni Bentley

By the time she retired from the stage in 1989, Suzanne Farrell had achieved a career that is without precedent in the history of ballet. This memoir, first published in 1990 and reissued with a new preface by the author, recounts Farrell's transformation from a young girl in Ohio dreaming of greatness to the realization of that dream on stages all over the world. Central to this transformation was her relationship with George Balanchine, who invited...

Very special.... you'll be touched by this story

Published by Thriftbooks.com User , 15 years ago
I stumbled across this book by accident almost a year ago and have been touched by it ever since. I'm not sure that I can explain the specialness of this of this story but it feels like a real life fairy tale. You can feel Ms. Farrell's emotions and passion of what it must have been like for her to work with her teacher, George Balanchine. What a dynamic duo they must have been together. I would recommend this book to everyone, whether you have been exposed to ballet or not, as a special glimpse into a very public but very private life. Truly a lovely story.

One of the more interesting dancer autobiographies

Published by Thriftbooks.com User , 17 years ago
Suzanne Farrell was often regarded as Balanchine's ultimate "muse", although she was neither the first nor really the last. Balanchine in the 1960s became obsessed with this willowy, mysterious dancer, and choreographed many ballets for her. Their personal relationship was much gossiped about. But Balanchine was married (to another "muse", Tanaquiel le Clerg), and Farrell was a staunch Catholic. Eventually, she married another dancer, and left the New York City Ballet. When she returned 5 years later, Balanchine's personal obsession was over. They worked professionally till his death but it seems as if Balanchine never became emotionally invested in her again. Farrell for her part loftily insists that the relationship was consummated through "dance" and not the traditional way. One wonders if it was this remoteness and unattainability that made Balanchine so hurt when Farrell married and left the company. Farrell's book is a moving personal story, and I'm too young to have seen her dance but surviving videoclips make it easy to understand Balanchine's obsession. She was indeed a beautiful, electrifying dancer. However, like a lot of singer autobiographies, Farrell can't help but sound a bit self-centered. She was isolated at the NYCB due to resentment from the other dancers, but it seems impossible that she'd remain so completely oblivious to the company's other members. Thus, 1960s mainstays of the NYCB like Edward Villela, Patricia McBride, Karin von Arnoldigen, that all figure so prominently in any chronology of the NYCB, are completely absent in Farrells story. From someone reading her book you'd think Balanchine choreographed solely for her, that she was the only important ballerina in his life, and that the company essentially revolved around her. This is not a criticism, but it's something to keep in mind when reading the book. I'd suggest also getting a biography of Balanchine, to keep this in perspective. To Farrell's credit, she never self-aggrandizes or vilifies anyone. She admits Balanchine could be selfish and smothering, but overall she treats him very sensitively. She is also fair about her mother, a typical stage-mom. Overall, this is one of the best autobiographies of a dacner that I've read. Its candid and personal. However, like most autobiographies I wouldnt read it as an entirely accurate history of ballet either. As an interesting footnote, Farrell's frequent stage partner and new NYCB dancermaster Peter Martins fired Farrell from teaching at the NYCB after a blowup in the late 1990s. In a preview of the book Farrell mentions the firing. Farrell's co-writer was Toni Bentley, who's also written a fascinating personal account of being a NYCB dancer.

Holding on to the Air captivates and intrigues the reader.

Published by Thriftbooks.com User , 22 years ago
A must read for ballet lovers, Holding on the Air is beautifully and honestly written by Suzanne Farrell, legendary ballerina of the New York City Ballet. The reader is taken from Miss Farrell's early days as Suzanne "Ficker," ballet student, to Suzanne Farrell, ballet star. She writes about her early hardship at NYCB, her marriage, her fame, and her somewhat loving and complicated relationship with choreographer and ballet master George Balanchine. Balanchine once told Farrell to think of "holding on to the air" in order to do a particular balance. For me, the title of her book signifies her holding on to the air that gave her dancing life. It signifies holding on to memories, holding on to her artistry, and for using her air to inspire so many younger dancers. Truly a candid and telling story of America's premiere ballerina.

It was incredibly touching

Published by Thriftbooks.com User , 22 years ago
I thoroughly enjoyed reading about the life of this incredible Balanchine ballerina. The story was so touching and I cried several times. It is a must for any dancer or anyone with dreams.
Copyright © 2020 Thriftbooks.com Terms of Use | Privacy Policy | Do Not Sell My Personal Information | Accessibility Statement
ThriftBooks® and the ThriftBooks® logo are registered trademarks of Thrift Books Global, LLC