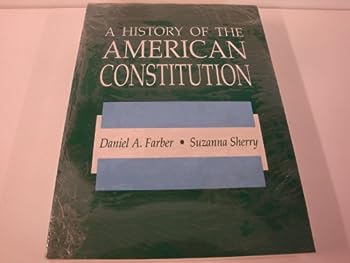 History of the American Constitution

by Suzanna Sherry and Daniel A. Farber

This description may be from another edition of this product. The newly published third edition brings the material up-to-date with both the latest historical scholarship and the most recent Supreme Court decisions using historical analysis. Among both judges...

America at its best.

Published by Thriftbooks.com User , 16 years ago
I am writing this review although I did not finish reading the book, but I like it so much that I decided to write something about my first impressions on it. In current times it is a book to be read for several reasons. My first one, is, it helps understand how America was created. I am a foreigner, so for me this book has several clues about the values of the American people in the past, when many concepts about democracy were being forged. It is a source of ideas to be revisited today for at that time America was not a powerful country, so it presents important facts and ideas that were discussed when the nation had more basic needs. The history in this book is in great part of universal importance, for some of the facts described were at a time when the people and leaders involved were not just Americans, they were representatives of mankind, they were opening a new frontier for man.
Copyright © 2020 Thriftbooks.com Terms of Use | Privacy Policy | Do Not Sell My Personal Information | Accessibility Statement
ThriftBooks® and the ThriftBooks® logo are registered trademarks of Thrift Books Global, LLC