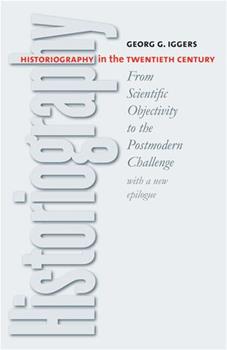 Historiography in the Twentieth Century: From Scientific Objectivity to the Postmodern Challenge

A broad perspective on historical thought and writing, with a new epilogue. In this book, now published in 10 languages, a preeminent intellectual historian examines the profound changes in ideas about the nature of history and historiography. Georg G. Iggers traces the basic assumptions upon which historical research and writing have been based, and describes how the newly emerging social sciences transformed historiography following World War II...

Liberal and broad, but imprecise

Published by Thriftbooks.com User , 14 years ago
Excellent overview of 20th century historiography, and particularly impressive in its dealings with German and Eastern European works. Well-suited for teaching and study; Iggers takes all trends and ideas seriously. My only reservation is that the term "postmodern" is used to cover almost everything that has been written the last 40 years -- leaving the term hopelessly wide, and many categorizations pretty meaningless.

An excellent and well-written overview.

Published by Thriftbooks.com User , 19 years ago
One of the great revelations I had in college many, many years ago occurred in the stacks of the library. I was doing some research on Wilhelm Dilthey and found myself looking at several thousands of books devoted to the history of philosophy. At that moment I began to have some idea on how difficult it is to acquire a magisterial overview of any field of inquiry. It takes a lifetime of study and the mastery of several languages to develop have such an overview. And sadly, that knowledge sometimes gets pored into a book that relatively few people ever read.This book by Georg Iggers represents that level of learning. Iggers specializes in German intellectual history but has read deeply in the historical work done in Italy, France, England and the U.S. of A. as well.What he is trying to do in the brief book (147 pages of text, 23 pages of footnotes) is to give an overview of the most influential approaches to history of the last century. His work is divided three main parts. The first section covers the latter part of the 19th century and the early 20th. This period is dominated by the influence of Ranke and his ideas. Iggers also discusses the influence of Weber, Troeltsch, Meinecke, Karl Lambrecht, Parrington, Beard, Becker and many others that were involved in these early disputes. Obviously, Iggers can only cover a few of these people in any sort of depth but he seems to have a gift for summarizing the main point of a debate in a few lines.One note of caution: with any such survey, I cannot help but wonder how accurately the author is expressing the views of those s/he is writing about. Iggers interprets Dilthey in a way that I disagree with but which is common enough. This is the only time in this book that I found myself disagreeing with his presentation except for that on Hayden White. More on that later.The second part of the book covers the period just before and after WW II when the other social sciences began to make their influence felt in way history was practiced. Iggers talks at length about the body of work surrounding the journal, Annals . He also covers the work of the Historical Social Science school in Germany (Hans Wehler, Eckert Kehr, and Jurgen Kocka among others) as well as Marxist historiography from that period (people like Maurice Godelier in France, E.P. Thompsom and Christopher Hill in England).This second part of the book was the most informative for me. I was ignorant of many of the Germans and obviously haven't paid enough attention to the work of Braudel. Iggers is great for orienting yourself to explore some of these schools of history.The last section is on the postmodern critique of history, the development of schools of microhistory, and the rise of schools of history focusing on women or ethnicities that are outside the grand narrative of Western History.I found the most interesting subsection to be that on the Italian school of microhistory. Carlo Ginzberg is probably the best known proponent to those of us wh

Published by Thriftbooks.com User , 20 years ago
It narrates the historiographical approach in an unbiased way. It helps an average student to realize the history of historical writing in modern world.

Published by Thriftbooks.com User , 22 years ago
Iggers examines basic trends in how history is written. The book looks at how social sciences transformed historiography after WWII. Iggers describes a trend in the postmodern discipline towards a microhistory, cultural history as well as the history of the common man. An interesting read.

An excellent introduction to historiography.

Published by Thriftbooks.com User , 24 years ago
Written in a clear, unpretentious style. The perfect gift for a postgraduate history student.
Trustpilot
Copyright © 2022 Thriftbooks.com Terms of Use | Privacy Policy | Do Not Sell My Personal Information | Accessibility Statement
ThriftBooks® and the ThriftBooks® logo are registered trademarks of Thrift Books Global, LLC