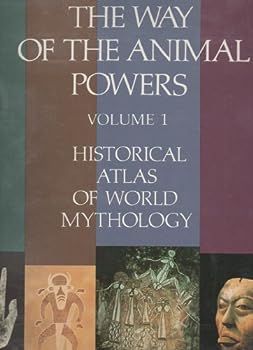 The Way of the Animal Powers (The Historical Atlas of World Mythology, Vol. 1)

The volume itself is a onsummatje example of the art of bookmaking. Campbell's scholarly and readable text is integrated throughout with a profusion of color plates, specially-commissioned full-color... This description may be from another edition of this product.

Published by Thriftbooks.com User , 12 years ago
The book came in a timely manner, was well protected for shipping, and arrived in the condition reported by the seller. Why this series isn't required reading for teachers in the educational system to provide a wide background of the historical records of the world and the place mythology has played in the world's development; I find that a mystery. Additionally, for the beginning anthropologists and earth sciences debutantes it provides a nice overview of the period based on the fossil records and the development of the mythologies they lived by. . . but you really will need the whole series for full effect.

Published by Thriftbooks.com User , 14 years ago
[Review written in May 2004] Series Review: Historical Atlas of World Mythology Where to begin ? Joseph Campbell, without exaggeration, is probably one of the 100 greatest scholars of the 20th century. He was a genius, a polymath, a world-travelling polygot, a brilliant teacher and a master storyteller - all in one. On top of that, he was also one of those exceedingly rare individuals who was able to stand astride the disparate realms of both academia and mainstram culture with equal aplomb ... and be warmly embraced by both. Take a brief glance at the list of his works (at the Joseph Campbell Foundation, or my own site) and you can't help but be amazed that a lone human being could cover such breadth, and such depth, in such a broad field in a single lifetime. His influences have been far reaching and profound - George Lucas considers himself to be a student of Campbell, and openly credits him as the source inspiration for the whole Jedi Knight / Force motif in Star Wars. Campbell's two most well known works (amongst the general public anyway) are "Hero with a Thousand Faces" and "The Power of Myth". However, among academics, his magnum opus is considered to be The Historical Atlas of World Mythology (henceforth 'HAoWM'). It is the crowning achievement of a long and incredibly prolific career - much of it published posthumously, shortly after his death. It's a 4 volume book (actually it's 2 volumes, each with 2 parts) published in a single-spaced tri-column oversize 11" x 16+" softcover format, and it's packed to the gills with hundreds of numbered footnotes, endnotes and numbered illustrative photos & art ... all of them meticulously and exhaustively enumerated in the bibliography. The HAoWM is stupendous in it's breadth, depth, and ambition - it is nothing less than an exhaustive documentation and analytical discourse on the entire sweep of Human mythology, across ALL peoples, nations and times ... all the way back to the earliest known traces of humanity's very existance. It's very dense, toothsome reading, and I'll try to give you a feel for why. Campbell is a wonderfully patient and helpful mentor, but as I've already mentioned above, he's also very polymathic, and although he goes out of his way to help his students and readers to follow along by providing ample numbered endnotes and footnotes and explanatory digressions, the material is still VERY dense and far roaming ... and it requires a fairly decent amount of effort (and polymathy) on the part of the reader in order to keep up. Taking just half (1/2) of one (1) page at random, the writer, while elaborating on some subtle & profound point or observation that he's patiently trying to get across to the reader, roams freely & comfortably amongst a huge array of topics and references ... from hardcore archeology & oral traditions (includuding his own persona travels to distant tribes in polynesia or northern japan), to philosophy (i.e., references to plato, a
Trustpilot
Copyright © 2022 Thriftbooks.com Terms of Use | Privacy Policy | Do Not Sell My Personal Information | Accessibility Statement
ThriftBooks® and the ThriftBooks® logo are registered trademarks of Thrift Books Global, LLC