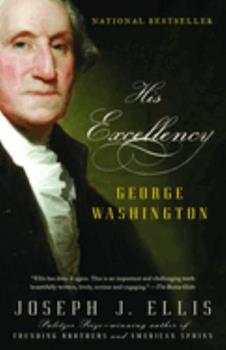 National Bestseller To this landmark biography of our first president, Joseph J. Ellis brings the exacting scholarship, shrewd analysis, and lyric prose that have made him one of the premier historians of the Revolutionary era. Training his lens on a figure who sometimes seems as remote as his effigy on Mount Rushmore, Ellis assesses George Washington as a military and political leader and a man whose "statue-like solidity" concealed volcanic energies...

Best Biography Out There

Published by JJD , 2 years ago
I enjoyed this book. It was frank, packed with history, fair and insightful. Some biographies become more about the author than the subject. This one has loads of facts with meaningful insight. It’s well worth the read.

Published by Thriftbooks.com User , 13 years ago
Ellis shares the life of Washington with special attention to the struggles of Washington as he wrestles with virtue. Ellis concludes that virtue is only as good as a person's actions. He pays particular attention to Washington's struggle with slavery and the United States relationships with Native American tribes.

An excellent introduction to George Washington as a human being

Published by Thriftbooks.com User , 15 years ago
Joseph Ellis' "His Excellency: George Washington" is a well done brief biography of George Washington. Washington, surely, could be the subject of one of those massive bios, such as Chernow's "Alexander Hamilton" or "Titan" or Nasaw's "Andrew Carnegie" or Cannadine's "Mellon." On the other hand, not all biographies need to be so massive. Ellis' work is insightful, provides a sense of Washington the person, and outlines the growth of his character, as he controls his ambitions. In 275 pages, we get a pretty good perspective on "the father of our country." This biography tries to steer a middle course between two different approaches to Washington. As Ellis says (page xi): "In Washington's case the arc moves from Parson Weems' fabrications about a saintly lad who could not tell a lie to dismissive verdicts about the deadest, whitest male in American history." In placing him among other of the Founders, Ellis makes, I think, an insightful point (page xiv): "It seems to me that Benjamin Franklin was wiser than Washington; Alexander Hamilton was more brilliant; John Adams was better read; James Madison was more politically astute. Yet each and all of these prominent figures acknowledged that Washington was their unquestioned superior." By the way, lines such as these make me scratch my head as to the critics of this book who attack the author for denigrating Washington. Parson Weems and his fantasies should not guide our consideration of Washington. He was a human being, not a demigod. And this book demonstrates why we should hold him in high esteem (while also realizing his human foibles and weaknesses). In his death and afterwards, Washington also demonstrated why he stood apart from other Founders. Jefferson was uncomfortable with slavery, but did nothing about his discomfort. Washington was uncomfortable, and worked to free his slaves upon his death. His will represented (page 263) ". . .his personal rejection of slavery. As we have seen, he had been groping toward this position for many reasons and for more than thirty years, more gradually than we might prefer, more steadily than most of his fellow slave owners in Virginia. He was, in fact, the only politically prominent member of the Virginia dynasty to act on Jefferson's famous words in the Declaration of Independence by freeing his slaves." The book provides a straightforward narrative of Washington's life. From the travails of his youth, to his efforts at developing a trade (e.g., as a surveyor), to his effort to becoming a military officer (culminating in both disaster and reputation in the French and Indian War), to his involvement in debates over independence in his own colony (Virginia), to his accession to general in the Continental Army, to his holding the army together under straitened circumstances, to his role in moving toward a Constitutional Convention, to his service as the first President. Noteworthy is the treatment of his learning to be the primary military

Published by Thriftbooks.com User , 18 years ago
His Excellency George Washington attempts to free Washington from the frozen icon/monument status that has gathered around his name, and presents him to the reader as an approachable, flesh and blood portrait. Joseph Ellis accomplishes this goal admirably. Most notably, he manages to steer cleanly between Charybdis and Scylla, avoiding the twin errors of portraying his subject as a saint, or its opposite, which he describes in his prefaces as "the deadest, whitest male in American history." He accomplishes this in a modest 275 pages, which makes this book an ideal introduction for someone beginning to study the life of Washington. The central thesis of this work is that Washington's amazing career was driven by an enlightened self-interest, tempered by a hard-earned practical wisdom. Always sticking closely to the available evidence, Ellis shows us a young Washington full of unbounded ambition for wealth and social status that he learned to control and temper, but never eliminate. Ellis writes that, "ambition this gargantuan were only glorious if harnessed to a cause larger than oneself, which they most assuredly were after 1775." He shows us Washington as a self-educated man, not from books like his illustrious contemporary Ben Franklin, but from practical, visceral experiences of his youth fighting the French and Indians in the backcountry of Pennsylvania. He views Washington's inglorious defeat at the Great Meadows and his miraculous survival of the carnage of Braddock's massacre as critical events that freed him of illusions, and left him a man who viewed the world through practical realities rather than shimmering ideals. This practical education, working on his natural ambition, created the control mechanisms that allowed Washington to serve his nation so long and so well. Ellis writes mainly of the public Washington. He begins the book not with Washington's birth, but at the point in his youth when he first appeared on the world stage. While the short length of the book limits the depth of its inquiry, it does manage to touch on most every important aspect of Washington's public life, including his positions on dealings with the American Indians, and his evolving ideas about the injustice of slavery. There are many other books that can provide more in depth and comprehensive accounts of Washington. This book serves as an outstanding, balanced introduction to the man we call the father of our country, and is an excellent place to begin. Theo Logos

Published by Thriftbooks.com User , 18 years ago
I was fortunate to review an advanced copy of this book, and was captivated by its straightforward and accessible descriptions of George Washington. While we all remember what we learned in school, because I was overseas I think what I learned had very little to do with the actual person. What this book does exceptionally well is capture the emotions and convictions Washington held. Too often he is viewed as a caricature or an icon, as opposed to a great leader of people who had his own doubts, fears and journey. This is the side of George Washington we need to see more of. While not as detailed as recent works on John Adams and Ben Franklin, the letters and commentary are worth the effort. If you are at all interested in American history, then this is a wonderful introduction to one of the founding fathers of this great nation. Well done, highly recommended.

Excellent Introduction to the Life of George Washington

Published by Thriftbooks.com User , 18 years ago
Mr. Ellis has written a succinct and fresh biography of our first President. A previous recipient of the Pulitzer Prize and the National Book Award for his American Revolutionary histories, he has expanded upon a brief essay of Washington included in his "Founding Brothers." This is not an in-depth day-by-day account of Washington's life. For that pleasure, I refer the reader to the definitive four volume set (and 1,800+ pages) published over 30 years ago by James Thomas Flexner. Even Mr. Flexner's one volume abridgement is more detailed (at 400 + pages) than Mr. Ellis' new biography (only 275 pages of narrative). The difference lies in Mr. Ellis' big picture approach and his interpretation of key events during Washington's lifetime. So Washington's love of Sally Fairfax is restricted to a mere two pages and his estate at Mount Vernon gathers more ink than his tranquil marriage to Martha. Instead "His Excellency" focuses upon the impact that Washington's decisions had upon the course of American history. Overall this is a well-written and thoughtful introduction to the life of George Washington.
Trustpilot
Copyright © 2022 Thriftbooks.com Terms of Use | Privacy Policy | Do Not Sell or Share My Personal Information | Accessibility Statement
ThriftBooks® and the ThriftBooks® logo are registered trademarks of Thrift Books Global, LLC