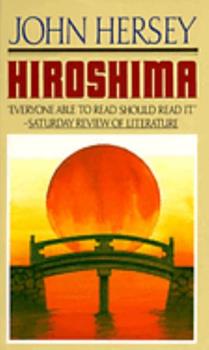 "One of the great classics of the war (The New Republic) that tells what happened in Hiroshima through the memories of survivors--from a Pulitzer Prize-winning journalist. On August 6, 1945, Hiroshima was destroyed by the first atom bomb ever dropped on a city. This book, John Hersey's journalistic masterpiece, tells what happened on that day. Told through the memories of survivors, this timeless, powerful and compassionate document has become a classic...

"The hurt ones were quiet; no one wept, much less screamed in pain..."

Published by Thriftbooks.com User , 16 years ago
When the atomic bomb dropped at 8:15 a.m. on August 6, 1945, Hiroshima was a thriving city of two hundred forty-five thousand people. By 8:20, one hundred thousand of those people were dead. Combining the broad perspective of the absolute devastation of the city with the tiniest details of six individual lives, John Hersey provides a powerful closeup of a few survivors of the atomic attack on Hiroshima, giving the carnage a human perspective. Focusing on Mr. Tanimoto, a Methodist pastor; Mrs. Nakamura, the widow of a tailor, and her three children; Dr. Masakazu Fujii, a physician in a private clinic; Fr. Wilhelm Kleinsorge, S. J, a priest in a Catholic mission; Dr. Terufumi Sasaki, a young surgeon at the Red Cross Hospital; and Toshiko Sasaki, a clerk in a tin works, as they survive the initial attack, the author follows their daily movements, their subsequent illnesses, their fears, and the eventual outcomes of their lives. The victims become human, and their concerns become universal, as Hersey shows them digging themselves out and helping their neighbors, filled with an "elated community spirit" in the days and weeks after the bombing. Details of the fires following the bombing, the unexpected radiation sickness, the mysteries surrounding the kind of bomb this was (some Japanese believed that the allies had sprinkled powdered magnesium over the city and then ignited it), the devastating rains that followed, and the monumental scale of the damage are presented in straightforward, factual style, the horrors of the reality so overwhelming that Hersey had no need to try to control his narrative by selecting details or ordering them for effect. Published in the New Yorker in August, 1946, this anniversary remembrance had immediate and dramatic repercussions, perhaps because the focus on "ordinary" Japanese citizens, much like the Americans who read the article, as opposed to "the enemy," resonated with his readers. Thousands listened to four days of its reading on ABC radio, and many others bought the New Yorker to read his account. By raising also the question of the ethics of dropping such a bomb (which some of the Japanese agree was acceptable as a normal part of the war), he also forces his readers to consider the long-term implications of atomic warfare. Dramatic, powerful, and very personal, this account of six lives, changed forever, is a monument to the human spirit in the face of incredible adversity. n Mary Whipple

Published by Thriftbooks.com User , 20 years ago
On August 6th, 1945, a bomb with the explosive force of 12,500 tons of dynamite was shot into the heart of the Japanese metropolis of Hiroshima. Not only did the initial blast virtually topple the city, maiming and killing tens of thousands, but the radiation unleashed by the atomic bomb inflicted countless more with radiation poisoning that caused chronic sickness and even more gruesome deaths. Less than a year after the attack, journalist, John Hersey, interviewed six survivors for a special edition of the New Yorker. The issue sparked a sensation, selling out within hours and gathering extensive acclaim from Hersey's peers. The article was sent to members of the Book-of-the-Month club as a selection and was read aloud on special radio broadcasts all across the world. Reading the paperback edition of Mr. Hersey's extensive article, I had little difficulty seeing why it gathered such acclaim. He does not just take readers to the scene of the bombing; he takes them behind the eyes of those affected. Mr. Hersey temporarily disregarded the sociopolitical and moral debate concerning the atomic attack and told a straightforward, compelling and vivid story of human beings coming face to face with mammoth, almost surreal, tragedy. This new addition, featuring an additional chapter that reveals the fates of the six survivors forty years later and describes the social stigma, medical difficulties and psychological and philosophical adjustments involved in being a "hibakusha" or "explosion-effected person" only makes this journalistic triumph even better. I highly recommend Hiroshima to anyone interested in atomic warfare, World War II, Japanese culture or those who simply wish to read about the human experience at its most grave and epic.

A book everyone should read atleast once

Published by Thriftbooks.com User , 21 years ago
Hiroshima was John Hersey's brain child about his feelings on World War 2. Even though this book is not the best source if you are interested in statistics and the United State's side of the story about the Atomic Bomb that was dropped on Hiroshima, instead Hersey turns the tables and shows how the Japanese dealt with the disaster they were tossed. Hersey investigated and interviewed six people who lived through the bomb and retells there survival tales. Just like in many of his other books Hersey is able to show the problems he finds in the world, and lets people know about these problems through his work. His ability to turn around and show a situation from another point of view is the reason that Hiroshima is such a great work.

Hiroshima is a journalistic masterpiece.

Published by Thriftbooks.com User , 22 years ago
Hiroshima isn't meant to be great entertainment. The point of journalist John Hersey's account of six survivors of the Hiroshima bombing (Miss Sasaki, Rev. Tanimoto, Father Kleinsorge, Dr. Sasaki, Dr. Fuji, and Mrs. Nakamura) is meant to be an unbiased view of the actual horrors of the atomic bombing of Hiroshima that killed over 100,000 residents of that city.John Hersey carries the book right along, never holding up for a minute. All the details of the accounts of the six survivors are written in great deal, and create a series of emotions unsurpassed by many works of both fiction and non-fiction on the subject. For all of you readers who found it boring, I guess you didn't understand what you were getting into. This book must be read with the knowledge that it is a journalist's account of the bombing of Hiroshima, not a straight-forward work of non-fiction. P.S. In all the new publications of the book, a detailed account of the lives of the six survivors the years following the Hiroshima bombing is included as a kind of epilogue written still by John Hersey.

Published by Thriftbooks.com User , 22 years ago
Hiroshima was published in 1946 - a year after the bomb was dropped - in New Yorker magazine. Uniquely in its history, the magazine devoted its entire issue to Hersey's 30,000 word essay. Only later was it turned into a book; the final chapter on the subsequent lives of the six subjects wasn't written until 1985.Hersey set out to put a human face on the consquences of the atomic bomb. All earlier news accounts, articles and stories had been focused on the statistics, the science, and the effort that led to the nuclear weapon. Understood in that context, understanding what Hersey was trying to do and say, the book is even more remarkable.It is not a novel; a novel is a work of fiction. It is an essay, a work of reportage. This story is true. The book is all the more remarkable because Hersey was born and raised in China, the son of missionaries, and had no reason to be sympathetic to or about the Japanese. A war correspondent for Time, he earned a commendation from the U.S. Army at Guadacanal. He cannot fairly be accused of anything but supreme objectivity. By telling the true stories of six survivors in an absolutely straightforward way, without judging the decision to use the bomb, he put an intensely human face on the consequences.He was criticized at the time and is criticized today for taking the events that day out of context. The bomb is supposed to have saved a million American casualties (a highly suspect figure today). It was supposed to have shortened the war by a year or more. Those critics are themselves missing the true context. At the time, the historical events leading to Truman's decision were well known (although recast in February 1947 by Stinson). Hersey's goal was to make the story real in a new way. Those facts are well and good, Hersey is saying, but there were bad consequences as well. In the process, he created a remarkable book.I was glad to see New York University recently named Hersey's Hiroshima as the best single work of reporting in the 20th century. As events unfold in the escalating nuclear arms race on the Indian subcontinent, everyone needs to understand the human consequences of the use of nuclear weapons. By helping keep Hersey's work before us, perhaps we can avoid another Hiroshima or Nagasaki.

Hiroshima Mentions in Our Blog

My Guilty Obsession
Published by Violet • May 20, 2020
This is my confession. I'm ready to share my story and set myself free of guilt for loving Young Adult dystopian fiction. Journey with me down the twisting road that led me here, and explore some of my favorite titles I found along the way.
Read Article
Trustpilot
Copyright © 2022 Thriftbooks.com Terms of Use | Privacy Policy | Do Not Sell or Share My Personal Information | Accessibility Statement
ThriftBooks® and the ThriftBooks® logo are registered trademarks of Thrift Books Global, LLC