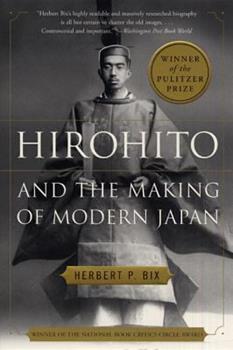 Hirohito and the Making of Modern Japan

Winner of the Pulitzer Prize In this groundbreaking biography of the Japanese emperor Hirohito, Herbert P. Bix offers the first complete, unvarnished look at the enigmatic leader whose sixty-three-year reign ushered Japan into the modern world. Never before has the full life of this controversial figure been revealed with such clarity and vividness. Bix shows what it was like to be trained from birth for a lone position at the apex of the nation's...

Revisionism in the Best Sense of the Term

Published by Thriftbooks.com User , 20 years ago
Mr. Bix's book well deserves the many accolades it has won - the Pulitzer Prize and the National Book Critics Circle Award among them. It represents the most comprehensive, well argued and carefully documented modern presentation of the case for viewing the Emperor Hirohito as an active "war lord," differing from Hitler, Stalin and Mussolini only in the indirection of his operational style. The Showa Emperor was an enthusiastic participant in the politics, ideology and conquests of the war years, but he hid behind the myth and ritual of his ceremonially divine status, protected by a loyal coterie of court officials. The exigencies of the postwar occupation and the historical amnesia of subsequent generations in Japan and elsewhere enabled Hirohito to escape the consequences of his actions. Mr. Bix's fair but damning political biography makes an impressive attempt to redress the balance. My only serious complaint is that the paperback edition lacks a bibliography. Also, I could have done with a bit more background on the events of the Meiji restoration and the nature and practice of Shinto. But these quibbles do not stand in the way of a warm recommendation.

Shredding the curtain of lies

Published by Thriftbooks.com User , 21 years ago
Accepted wisdom says that from his accession in 1926 until the end of World War II, Emperor Hirohito of Japan was a European-style constitutional monarch, with some influence but no real power over his nation's destiny. He had no role in planning or waging the war, and knew nothing about war crimes and outrages like the Rape of Nanking or the Bataan Death March. It was the personal intervention of the peace-loving Emperor, the story goes, who realized the war was lost, that finally forced the militarists to surrender. After the war, the US-imposed Japanese constitution marked a complete break with tradition, and the beginning of a new political and social structure for the Japanese nation.Herbert Bix accepts none of this conventional wisdom. Working from a wealth of Japanese and American sources, including many government documents from both nations' archives, Bix argues that the standard history is a tissue of lies. Indeed, Hirohito seemed to have lived his whole life surrounded, masked, and protected by lies -- first by his own government, and later reinforced by the Americans, who needed him and his nation as allies (not always willing) in the Cold War struggle against the Soviet Union.Instead of a conventional biography, 'Hirohito and the Making of Modern Japan' is a sweeping piece of political history. Bix argues convincingly that from the beginning, Hirohito had tremendous influence on the direction of Japanese government policy. His ministers consulted him, and heeded his advice. For example, he favored expansion of the war in China in the 1930s, and although he sometimes issued orders limiting the army's activities there, refused to punish officers who exceeded or ignored his orders -- provided their disobedience yielded positive results.Bix sustains a tremendous volume of detail throughout his volume -- more than can (or should) be covered in a brief review. I encourage you to read the book yourself. It more than repays the effort.The relationship between the US and Japan is one of the central pillars of American foreign policy in the post-war era. Now, with the end of the Cold War, there are signs the Japanese people are less and less willing to remain an American satrapy -- for all intents and purposes still an occupied country -- any longer. Herbert Bix's excellent book not only illuminates vital issues surrounding the Second World War, but also is tremendously useful for helping us understand the geopolitical world of today.

Published by Thriftbooks.com User , 21 years ago
Herbert Bix has done a great service in his book, not least of all to the American people. Not only is Emperor Hirohito convincingly unmasked as the activist war leader he was, but, even more importantly for Americans, we learn that the U.S. government and its representatives, most especially General Douglas MacArthur, were determined to cover up Hirohito's wartime role in pursuit of their version of American "national interest."Just how successful the U.S.-inspired coverup was, is attested to by the fact that it has taken more than half a century for Hirohito's wartime role to be revealed. Needless to say, the Japanese side, most especially the Japanese government and the Imperial Household Agency, also bear responsibility for preventing the truth from coming out. Yet Western scholars of Japan from Edwin Reishauer onwards, also contributed to the myth of Hirohito's innocence. Even during the Asia-Pacific War (World War II) Reishauer, for example, was writing memos statijng his conviction that America could use Hirohito for its own purposes after the war. Unlike Hitler, Hirohito, as a "living god," was wise enough to shield his decision-making power from the public eye. Bix's well-documented book allows us to pierce the veil of secrecy, a veil that has been maintained by BOTH the Japanese and American governments for all too long.If the Japanese people need to come to grips with the way in which they have been purposely deceived by their government in the postwar years, then so do the Americans. If the citizens of any democracy allow either their political or academic leaders to lie to them, then those democracies cannot but have a bleak future. We need only look at the Vietnam war debacle to realize how easy it is for those in power to believe that they can fool "all of the people all of the time."Those who believe that the truth is a formidable weapon in the arsenal of a free people are indebted to Herbert Bix and his work.

A "secret" deal between Hirohito and General MacArhur

Published by Thriftbooks.com User , 21 years ago
In eyes or minds of most Japanese liberals and lefts, what the author Herbert Bix revealed in this book has "virtually" nothing new. "Hirohito" was no doubt the #1 war criminal responsible for the deaths of many millions. As the author pointed out, the major reason why "Hirohito" escaped from the "war criminal" trials and execution was that General MacArthur (and the American government that supported his Japanese occupation policy) was quite keen to use 'Hirohito" (his spiritual "authority", and not his real political"power") as a tool to suppress most effectively the turmoils in the post-war Japan which otherwise would have been caused by both ultra-rights /millitary heads (against American occupation) and lefts (socialists and communists) against the Japanese establishment. Like many Japanese lefts, both my late father, who died at 83 in a few months after the "Hirohito"'s death in 1989, and myself long believed that both the "Emperor" (Hirohito) and the "Emperor System" (whether it is merely a "symbol"/"puppet" or not) should have been eliminated from Japan right after the end of WWII to establish the true democracy in Japan. Unfortunately our voice, which was considered only as a "tiny" fraction of Japanese people, has been totally ignored by the ruling conservative parties and governments in Japan for more than 55 years.Since a Japanese translation of this English book would never be allowed to be publihsed in Japan (or none of the major Japanese publishers would dare to take such a publication risk) for the coming decade(s), I have no intention to translate it for Japanese readers, although this book is no doubt worth reading for most of open-minded (or even closed-minded) Japanese. Instead, I am planning to write/publish my own Japanese book entitled "Showa Emperor (Hirohito) and American Caesar (MacArthur): making a fatal secret deal in post-war Japan", shortly after I shall retire from science in 2007 at 65. I am a Japanese citizen (born during WWII) working in Melbourne as a molecular oncologist who left Japan in 1973 to work in US, West Germany and Australia for a political reason, shortly after I received my Ph. D.. I firmly believe that the "Emperor System" is a highly malignant "tumor" creeping in Japanese society to be entirely eliminated as soon as possible in the coming 21st century. Otherwise he (or she) in this royal family could make "another" secret deal with a ruling political power(s) for their own survival somedays in the future. I am not against either "Hirohito", his sons or grandsons, personally, but strongly against this so-called "royal" (non-democratically elected) system that created him or his potential "treacherous" descents. Our history of more than two thousand years is telling us the real danger ahead.

Published by Thriftbooks.com User , 21 years ago
In 1971 David Bergamini, a Rhodes Scholar, who was raised in the Orient and who speaks and reads Japanese, authored, "Japan's Imerial Conspiracy." Bergamini set forth a compelling argument in the role of the Japanese Emperor Hirohito in the planning and guidance of Japan's aggression before and during World War II. Japanese historians and western academia of the time savaged Bergamini; they closed their minds and buried the truth.Professor Bix has researched and documented the truth of Bergamini's earlier thesis. He does not merely rewrite Bergamini's work but he puts flesh and meat on the bare bones of truth so denounced in 1971. Professor Bix presents the story of Hirohito. A story of deception extending from the Meiji Restoration to the creation of the plausible deniability doctrine of Emperor Hirohito. The Bix work sheds light as to why Japan has refused an apology to China and other of her victims of World War II; to apologize would be a grievious mortal affront to nation's sacred beliefs in the Enperor.Publishers in Japan have refused to publish, "Hiohito: And the Making of Modern Japan." Japanese in many quarters, including the schools, still maintain the Rape-of-Nanking is but a vicious lie by those who are jealous of Japan. They cannot accept the truth that their Emperor would be a party to the atrocities committed against China and others.To those readers who seek to fill-in the blank spaces of knowledge dealing with World War II, Professor Bix's work is a must-read. I would only hope that a like work will one day honestly document the excesses of the United States before and during World WarII.
Trustpilot
Copyright © 2022 Thriftbooks.com Terms of Use | Privacy Policy | Do Not Sell or Share My Personal Information | Accessibility Statement
ThriftBooks® and the ThriftBooks® logo are registered trademarks of Thrift Books Global, LLC