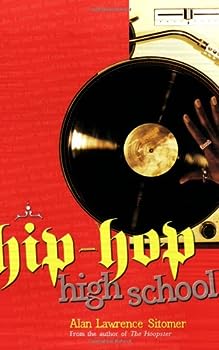 (Book #2 in the The Hoopster Series)

This description may be from another edition of this product. Theresa Anderson is every kind of smart but, with the example of super-achieving older brother towering over her, she hasn't even been trying. With her parents and teachers always on her case and her...

Published by Thriftbooks.com User , 2 years ago
This was a strong book. I loved it a whole lot. Theresa has changed from hanging out with bad kids to being a hard worker and determined to get into college.

Published by Thriftbooks.com User , 14 years ago
Meet Theresa Anderson, known to her friends as Tee-Ay. Alan Lawrence Sitomer has captured Tee-Ay's struggle to survive high school and make it to college, and at the same time deal with some serious issues -- drive-by shootings, discrimination, and poverty. HIP-HOP HIGH SCHOOL presents big-city teens with big-city problems in a realistic, yet positive and inspiring story. As a sophomore, Tee-Ay is finding it difficult to measure up to her older brother, Andre. (His story is told in Sitomer's The Hoopster). He is attending Stanford, and Tee-Ay thinks it would be great to be accepted at USC someday so she could tease Andre when USC kicks Stanford in football. Attending a top-notch university seems like a pretty lofty goal, but Tee-Ay is willing to fight for it. The story takes Tee-Ay and her fellow classmates through 10th, 11th, and 12th grade to graduation. Along the way she watches one friend, Cee-Saw, become pregnant and drop out, and another almost lose sight of her goals due to family obligations. One positive force in Tee-Ay's life is Devon, who helps her tap into her true potential as they study together for the dreaded SAT -- their ticket to a brighter future. Sitomer uses hip-hop language to create vivid characters that grab the reader and carry them through right to the end. Big-city teens will be able to relate to the situations, and more sheltered teens will be transported to a world beyond their own. Note: Although this is listed above as grades 9+, many of my 8th-grade students have read and enjoyed it. In fact, when several of them saw me reading it, they immediately commented about how much they liked it. So many other students are requesting it now, we will probably need to hold some sort of lottery to determine the next reader. Reviewed by: Sally Kruger, aka "Readingjunky"

Making Your OWN Way

Published by Thriftbooks.com User , 15 years ago
In HIP HOP HIGH SCHOOL readers are introduced to Theresa "Tee-Ay" Anderson. She is the younger sister of her "perfect" brother Andre, who readers of the previous book in this trilogy, The Hoopster, will remember. Theresa is an average student, while her brother is an over-achiever. Even though Andre is off at college, Theresa can't seem to get out of his shadow. Theresa is intelligent, but much to the dismay of her parents, her decisions don't always mirror her smarts. She secretly aspires to attend college, but isn't quite confident enough to share her aspirations. On the outside she is consumed by thoughts of dateless Valentine's Days, hanging with her friends, and fresh hip hop beats, but inside she spends a lot of time contemplating her past mistakes, her fears about the future, and her insecurities. As the story progresses, readers get to know Theresa intimately, and they share in her experiences, which include the temptation of sex and drugs, her struggle for acceptance among her peers. Her friends in the book all seem to model how individual circumstances and decisions can result in strikingly different outcomes. By graduation day, Theresa has changed and grown, she has been through a lot, and many of her relationships have changed, but in the process, she has learned to accept herself and earned the respect of many important people. Alan Sitomer truly has a gift when it comes to writing fiction from the urban youth perspective. After reading the first book in this trilogy, I was immediately a fan. As I began HIP HOP HIGH SCHOOL, I was admittedly apprehensive about his ability to capture the voice of a female protagonist. After a short while, I was drawn in and captivated by Tee-Ay's character and all of my initial doubts were immediately assuaged. He writes an engaging story, with realistic characters. Reluctant readers are sure to relate to the characters in the story, they talk like teens and are going through experiences that are a universal part of growing up. The frustration they feel with school and parents and the apprehension they feel about the future are all incorporated into the story. The book touches on issues of race, class, and a myriad of social issues that impact teens and models the consequences of good and bad choices. Although HIP HOP HIGH SCHOOL is the second in a series of books, it is a story that can stand alone. HIP HOP HIGH SCHOOL was a satisfying read and I look forward to reading more of Alan Sitomer's work in the future. Reviewed by Stacey Seay of The RAWSISTAZ Reviewers

Wake up call for the world

Published by Thriftbooks.com User , 15 years ago
This was the biggest wake up call for the world you could ever read. I read this book in less than a month. I read it in school, at home, even on my way to basketball games. It was just that good. It is definitely a true-life type of story that is the one thing that makes you appreciate life a little bit more. I know it made me. This book has, fighting, comical views, love, hate, and just plain old friendship. It is the story of one girl who fights her way through high school in order to not become another dropout and succeeds. She has to fight through drugs, drinks, sex, relationships, and every other thing that a normal teenager has to deal with times 10. There's drunkenness, partying, cliques, shootings, and everything else that should probably not happen in high school or any other school except college. It is the most emotional, hip-hop oriented, and stylish book I have ever read. Two thumbs up.

BEST BOOK OF THE YEAR!!!

Published by Thriftbooks.com User , 15 years ago
A MUST READ!!! These pages have it all going on. The characters are true-true, the story is off-the-chains and the plots twists and weaves with so much good stuff that I couldn't put this baby down. Serious, I was laughin', I was on the verge of tears --- CHECK THIS BOOK OUT... IT'S THE REAL DEAL!!! I mean I had heard it was good, but this good... a very sweet novel!
Copyright © 2020 Thriftbooks.com Terms of Use | Privacy Policy | Do Not Sell My Personal Information | Accessibility Statement
ThriftBooks® and the ThriftBooks® logo are registered trademarks of Thrift Books Global, LLC