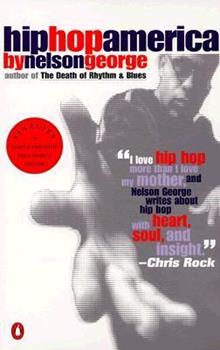 This is an account of the history of hip hop music, from its roots in the late 1970s to its emergence as the cultural force it is today, influencing everything from films to advertising, fashion to sports. Nelson examines why it has held a steady grip on American popular culture for over 20 years.

Published by Thriftbooks.com User , 17 years ago
Of all the Hip Hop related works that I've read (and that's many), none can reach the insightful level of Nelson Georges's "Hip Hop America", which not only covers the history of the culture, but more importantly, delivers the sociological aspects of it, explaining not only "when", but also "how" and "why". It made me an instant fan of Nelson George. It's a very informative, sincere and to some extent analytical book, with plenty of facts and informations and first-hand experiences from the man "who has not only witnessed the evolution of hip-hop, but who. . . has had a hand in shaping it, as well." (The New York Times Book Review).I could really write a long review for this great book, but I'll probably do that after my second reading, which starts NOW!

An Intellectual Analysis From a B-Boy's Point of View

Published by Thriftbooks.com User , 19 years ago
One of America's foremost hip-hop journalists, this book is essential to understanding both the positives and negatives of hip-hop music in both its past and present forms. George displays an excellent knowledge of both street and music industry politics in discussing a musical genre all too commonly lacking enough intellectualism. Understandable for everyone from the button down white collar worker of Wall Street to the average street thug, this book is recommended reading for both those knowledgable with hip-hop and those who are not.

inside story of hip hop business

Published by Thriftbooks.com User , 21 years ago
I've listed to hip hop music for 16 years and Nelson George filled in all the blanks of things I wish I understood better. From the internal conflict at the Source magazine, to the story of several hip hop producers including Puff Daddy, Teddy Riley, and Dr. Dre as well as the record execs behind the scenes like Andre Harrell, etc...Nelson George covers it all. I loved this book. It does not describe hip hop as a dance or an artist or a song, but as the cultural phenomenon it has become.

Published by Thriftbooks.com User , 21 years ago
I read Hip Hop America. Not because I had ever heard of Nelson George or heard of his credits. Because I saw it, flipped a few pages and decided to read it. I loved it. I have been listening to hip hop music since the first time i spun Schooly D's PSK track. And Nelson George hits the nail on the head. he covers almost everything i could have wanted, although I would have liked more coverage on Tribe Called Quest and De La Sould as opposed to so much NWA material. What I liked best is how George is neither a critic or a fan (excluding PE of course). He's just an inside observer. He doesnt take many bias opinions, he just presents them. And the way he picks on not only hip hop culture, but things that affected hip hop and what hip hop has affected. Examples are Blaxploitation movies and Basketball in the 80's and 90's. If anyone is a smart hip hop fan then I recommend this book. I'm not talking about people who buy whatever is cool now (if you have a puff daddy album or a bel biv devoe album but dont listen to it anymore than i dont recommend this book), I'm talking straight up real hip hop fans. I also dont recommend this book for people who are trying to learn about hip hop. its gonna be like a foreign language. so give this book a try

Published by Thriftbooks.com User , 22 years ago
As an "old-schooler" who's not always crazy about the music (harder stuff anyway) but appreciate the generationality of it all, George has written a no-bs history of a still-evolving music/culture that's here to stay. It's lively with some great behind-the-scene stories and a lot of history. And, it's NOT dry or dull. It's a must read for any "new-schooler" and any one with an open mind, regardless of age. He's respectful, opinionated and thorough... yet objectively critical. That's the way the story of rap/hip-hop SHOULD be told.
Copyright © 2020 Thriftbooks.com Terms of Use | Privacy Policy | Do Not Sell My Personal Information | Accessibility Statement
ThriftBooks® and the ThriftBooks® logo are registered trademarks of Thrift Books Global, LLC