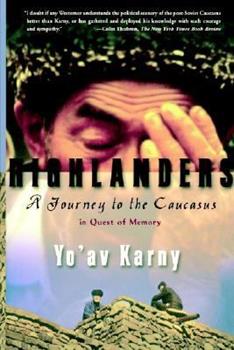 Highlanders: A Journey to the Caucasus in Quest of Memory

The story of the region, told by an intrepid journalist Many dire predictions followed the collapse of the Soviet Union, but nowhere have they materialized as dramatically as in the Caucasus: insurrection, civil wars, ethnic conflicts, economic disintegration, and up to two million refugees. Moreover, in the 1990s Russia twice went to war in the Caucasus, and suffered a humiliating defeat at the hands of a nation so tiny that it could fit into a single...

Published by Thriftbooks.com User , 21 years ago
First Im 'sorry for my bad English. It's not my native language.When we travelled with Yo'av through Caucasus I thought the future book will be the collection of stories in style "Foreigner in Caucasus". And my Russian and Caucasian friends told me: "Be serious, Alex. Your American-Israely journalist is not able to understand us!" But now... I've never read such a kind and clever book on this theme neither in English nor in Russian. Yo'av have seen such points and details, which can make honour to best experts in region. Thank you, Yo'av. Thank for the beautiful book, for your friendship and for I feel no shame telling that I rendered you a little piece of help.

A Circassian's opinion on this book

Published by Thriftbooks.com User , 21 years ago
Thanks to Yo'av Karny for such an informative book. I was pleasantly surprised to find such a detailed account of my Circassian History. This book really hit home with me, and I found myself weeping. Weeping because it brought back memories and stories that my grandfather used to tell me as a child. This book even covers the story of the Circassians living not only in the Caucasus, but also in the Golan Heights. Yo'av reveals both the good and bad side of Circassians, and Circassian history. Circassians suffered our own Genocide at the hands of various Russian tyrants. On the other hand, Circassian warriors were known for their ruthless actions during all of our battles. That is why Circassians were chosen by countless of kings and presidents alike to act as body guards. That is also why we were given the name "CHERKESS" (Neck Cutters) by our enemies. When European and Middle Eastern mothers wanted to frighten their childeren, they would warn them that if they weren't good, THE CHERKESS would come for them. Those are the sad facts. This book was a pleasure to read. Thank You Yo'av......Yaz Barsbay

Published by Thriftbooks.com User , 21 years ago
Thank you to Yo'av Karny for writing this book. As a Circassian, this book really hits home. For example, on page 292, when Yo'av writes about the fight at the Amman University, I have cousins that were a part of that dispute. On page 293, Yo'Av writes about the Golan Heights, between Israel and Syria. My family is from that region. My family observed first hand the death and suffering. As a small child, I saw first hand Israeli and Syrian jets in their deadly dance of death. For good or for bad, Circassians are a proud and stubborn people who are trying to retain their culture and history. We are spread out all over the world in countries such as the USA, Germany, Israel, Syria, Jordan, Turkey, and Great Britain. This book brought tears to my eyes. The Circassian and Chechen history is a very sad one, and millions of Circassians, Chechens, and Daghestanis have perished under Russian hands. On the other hands, Yo'av shows how Circassians were also capable of being violent and bloody. The Turkish people have a name for Circassians, and that is CHERKESS, (Neck Cutters). That sad fact is self explanitory. THANK YOU SO MUCH Yo'AV for wrting this book. GOD BLESS YOU......(Y.B.) A CIRCASSIAN.

The definitive guide to life and death in the Caucasus

Published by Thriftbooks.com User , 22 years ago
A magnificent read, with a gentle poetry all its own. This meticulously reasearched book is an absolute must-read (no, a must-own) for anyone with a thirst for history or the world in which we live today. You will learn more about the post-Soviet Caucasus republics and their indigenous peoples than by reading any other COLLECTION of works. Karny has obviously spent time among his subjects, and his respect for each (by our standards) idiosyncracy shines through his writing. Read this book, and you will never read another news report on the war in Chechnya again.

The Caucasus: A Fascinating Mosaic of Nations, Memory

Published by Thriftbooks.com User , 22 years ago
From New York Times Book Review, November 19, 2000, reviewed by Colin Thubron:The mountains and valleys of the Caucasus, spreading 750 miles between the Black and Caspian seas, may contain greater ethnic and linguistic diversity than any comparable region on earth. Throughout history, the area has attracted beleaguered minorities and insulated them in precipitous terrain. Long after the Russians completed their arduous conquest in 1864, the people of the Caucasus remained grimly self-sufficient. To unravel this web of small republics into a coherent narrative is a formidable challenge, and the Israeli foreign correspondent Yoav Karny has approached it head-on. During the early 1990's, following the collapse of Soviet power, his travels brought him into contact with many of the region's most influential figures: the wise, the rash, the moving and the ridiculous. He conducted his interviews with intelligence and modesty, astute in his interpretations but sensitive to possible misjudgments. If his new book, ''Highlanders,'' seems to zigzag through a maze of political factions and to deliver contrary messages, it is only reflecting the region's complexity. Karny at once negotiates crosscurrents of near tribalism and steamrolling modernity, bitter memory and contrived history, and emerges with a cry of foreboding. The net he casts misses some areas (no Georgia, no Ossetia), yet its reach is adventurously wide. There are the Cossacks, of course: a Russian resurgence seething with barely repressed militarism. And the once-renowned Circassians, clinging to their terrain in the long aftermath of a catastrophic 19th-century expulsion. And the remnants of small nations removed by Stalin and now returned: the Ingush, fewer than 250,000 strong; the Balkars, who lost over a third of their people in the deportation; and the Chechens, inexplicably intrepid. But Karny reserves the heart of his book for another ''autonomous republic'' within the Russian Federation: Dagestan. ''It is unlike any other part of Russia,'' he writes; ''indeed, few parallels could be produced anywhere. Thirty-odd nations, speaking some of the world's most exotic languages and heirs to some of the planet's oldest surviving traditions, are all bundled together in one province about half the size of Virginia.'' These tiny groups of people, united under a collective presidency, defy the lessons of Yugoslavia, Czechoslovakia and the old Soviet Union by surviving together in precarious statehood. The once-powerful Kumyks; the 90,000-strong warrior Laks; the Lezgins, split fatally between Russia and Azerbaijan -- all cohabit with communities as small as the Mountain Jews and the one-village nation of Khynalug, a near-illiterate Lezgin subgroup with its own language. Nationalism is shallow-rooted in the Caucasus, where loyalties have traditionally been regional and religious. But in the void left by the death of a supranational socialism, local patriotism rushed in. Within half a generation afte
Trustpilot
Copyright © 2022 Thriftbooks.com Terms of Use | Privacy Policy | Do Not Sell or Share My Personal Information | Accessibility Statement
ThriftBooks® and the ThriftBooks® logo are registered trademarks of Thrift Books Global, LLC