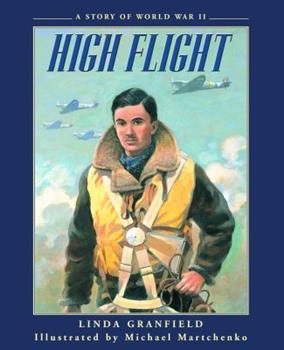 "Royal Canadian Air Force Pilot John Magee was only nineteen years old when he wrote the poem High Flight in 1941. Born in Shanghai and educated at Rugby School in England, Magee showed early promise as a poet. Impatient to take part in the war raging in Europe, Magee gave up a place at Yale University to enlist in the RCAF. Not long after writing High Flight, John Magee was killed in an air accident in Britain. Since its publication in a church bulletin,...

Very few of us live a more perfect life

Published by Thriftbooks.com User , 20 years ago
This delightful children's book, well worth reading by any adult whose imagination has risen above a stepladder up to some leaf-clogged eaves, is about the Royal Canadian Air Force pilot and the greatest poem ever written about the joys of flight. Magee, an American born in China, went to school in England, joined the Canadian air force and died in a training accident in England just four days after the Japanese attack on Pearl Harbour launched the United States into World War II. Like all great timeless literature from the realm of combat -- the Funeral Oration of Pericles, Lincoln's Gettysburg Address, and McCrae's In Flanders Fields -- it is about ideals instead of ideology. In 114 words, dated Sept. 3, 1941, he celebrated the sheer joy of flight. He could have had a scholarship to Yale in the fall of 1940 to study the classics; instead, that October he went to Canada. By then his father was assistant minister at St. John's Church in Washington, D.C., popularly known as "the church of the presidents." His parents hadn't been thrilled about his decision to fly instead of going to Yale, but they gave him their reluctant support. The poem, written on the back page of one of his letters from England, may have been his explanation of "this is why I like to fly" to his parents. Having spent hours in the cockpit of many aicraft, from sailplanes to bush planes, and executive jets to a Flying Fortress, I understand the feeling. I can't say "share," because the single engine fighters of World War II created a brief era in flight that will never be repeated. Today's jets are pure power, simply point and go anywhere; World War I aircraft were sadly limited by a lack of power. Magee flew when the sheer joy of piston engine power matched but didn't eclipse the nerve and ability of a pilot's feelings, reactions, skills and dreams. In only 28 pages, superbly illustrated by Toronto artist Michael Martchenko, Linda Granfield book tells how the spirit of a young man -- somewhat rebellious and undisciplined to start -- soared like the high flight he describes so memorably. I first found the poem when I was in the seventh grade, some 50 years ago, and memorized it as part of the 200 lines of memory work that were required every school year. It's the only poem from those years that stayed with me. This book is the first account I've read that describe's Magee's background, and how the poem came to be written. In school, we were told it was "written on the back of an envelope." The real story, admirably told by Granfield, is more inspiring. Truth is always better than fantasy or imagination. It's called a children's book. Don't be fooled. It's too good just for children. Anyone who understands the soaring adventure of the human spirit will love it. Magee made his dream come true. Very few of us get to live a more perfect life.

Published by Thriftbooks.com User , 21 years ago
"High Flight" is the brief story of the poem of the same title and its author, John Gillespie Magee, Jr. Often thought to be British, Magee was an American who served, and died, in the Royal Canadian Air Force during World War II. This book, for readers ten years and older, recounts Magee's life as a child of missionaries in China, his studies in Rugby school in England, his life in America, and his career in the RCAF. Interwoven with his story is the story of his famous poem and the events of WWII. The story is beautfully told and illustrated. It brought tears to my eyes and will be a joy for boys young and old.
Copyright © 2020 Thriftbooks.com Terms of Use | Privacy Policy | Do Not Sell My Personal Information | Accessibility Statement
ThriftBooks® and the ThriftBooks® logo are registered trademarks of Thrift Books Global, LLC