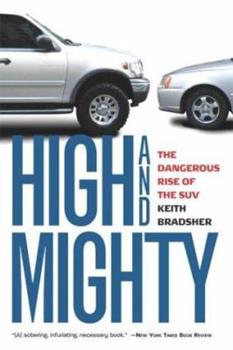 High and Mighty: The Dangerous Rise of the SUV

SUVs have taken over America's roads. Ad campaigns promote them as safer and "greener" than ordinary cars and easy to handle in bad weather. But very little about the SUV's image is accurate. They poorly protect occupants and inflict horrific damage in crashes, they guzzle gasoline, and they are hard to control. Keith Bradsher has been at the forefront in reporting the calamitous safety and environmental record of SUVs, including the notorious Ford-Firestone...

Published by Thriftbooks.com User , 20 years ago
As other reviews of this book indicate, advocates and opponents of S.U.V.s ("light trucks") will probably never agree about its role in contemporary society. What I found most illuminating in Bradsher's book is his analysis of the the vehicle's social, economic, and political history during the last 60 years. The current S.U.V. "boom" is undeniable. How to explain it? The S.U.V. contradicts recent movements to reduce air pollution while increasing traffic safety. Why and how has that been possible? What does the appeal of the S.U.V. to so many different people reveal about contemporary values? These are among the questions to which Bradsher responds and his answers are thought-provoking, at times upsetting. According to his account, very powerful forces in "Washington" and "Detroit" (used as generic terms just as "Hollywood" is used elsewhere) have achieved legislation which is beneficial both to those who sell and to those who purchase S.U.V.s. Bradsher argues that various concessions (e.g. luxury tax exemptions) are not in the general public's interest. No one denies the economic power of S.U.V.s: A single Ford factory in Michigan produced $11-billion in annual S.U.V. sales which is about equal to McDonald's global sales. But how safe are they? How cost-efficient are they? Bradsher's answers to these questions help to explain his comment that "Perhaps the saddest part of the S.U.V. boom is that it has been so unnecessary." A recent traffic accident in a suburb of Dallas resulted in the deaths of several teenagers in an S.U.V. Whether or not the accident is alcohol-related is a matter yet to be determined. I mention it because media coverage revealed what I had not previously known: Those employed by municipal and state agencies are required to complete special training before being allowed to drive larger S.U.V.s. As one deputy fire chief explained, "You simply can't drive the [name of large S.U.V.] the same way you drive a sedan. It's much too dangerous, especially when you have to make a quick maneuver." This single traffic accident proves nothing but the need for special training (at least to drive larger S.U.V.s) is for me indicative of an issue which has not as yet received the public attention it deserves.Whether or not Bradsher's book has much impact remains to be seen. My guess is that "the world's most dangerous vehicles" will continue to be among the most popular (and most profitable) vehicles sold. Thanks to Bradsher's book, I now understand "how they got that way." No doubt I will continue to ride in S.U.V.s driven by family members. Also, I will continue to feel intimidated by other S.U.V.s (as I am by tractor trailers) when surrounded by them in traffic. And yes, I will resent those whose S.U.V.s take up so much room that smaller vehicles (such as mine) cannot squeeze in next to them in most parking lots.

SUVs are No Safer, So Opt Out of the Highway Arms Race

Published by Thriftbooks.com User , 20 years ago
Keith Bradsher's lively, lucid and fascinating new book on sport utility vehicles is a major milestone and wake-up call for automotive safety. Bradsher shows how these gas-guzzling highway behemoths arose from a long history of special deals for the domestic automotive industry in the form of import taxes, subsidies and countless regulatory loopholes, with automakers left off the hook for everything from miles-per-gallon and emissions standards to safety protections. The tragic result of this piling-on of self-dealing and special favors, as well as the industry's SUV marketing juggernaut, is the spread of this most dangerous vehicle, which fails to protect its own occupants and poses a serious menace to others on the road. The loopholes also create an SUV cash cow for automakers, who are able to cut corners -- manufacturing shoddy vehicles on existing pickup-truck chassis -- and to grossly increase profits in the absence of rules requiring even basic safety and environmental features.In producing these pickups masquerading as yuppie fantasy vehicles, the automakers neglected years of highway safety research and created vehicles deliberately designed to look boxy, macho and frightening. But, in a crash, the high bumper, stiff frame and steel-beam construction of SUVs override cars and roadside guardrails. By failing to absorb crash energy or to crumple as they should, they can ram into other motorists and shock their own occupants' bodies. And their high, tippy design and weak roofs place SUV drivers at risk of death or paralysis in a rollover crash.As if this body count were not enough, the proliferation of SUVs is also a disaster for the environment. Because of the weak rules governing fuel economy and emissions standards for light trucks, the explosion of SUVs has begun to turn back the clock on recent pollution reductions, including emissions of carbon dioxide, which causes global warming. Bradsher documents the enormous, undue influence of automakers and their unions on Capitol Hill, showing how the industry blocked new regulations over and over again.Bradsher also points out that as SUVs start to flood the used-car market and new SUV sales increase, the next wave of consequences will be even more devastating. In this spreading highway "arms race," more consumers may feel they must compete by up-sizing the vehicles they buy, and less experienced drivers will be behind the wheel of these hard-to-handle trucks. So don't believe the auto industry's hype on SUVs, or its attempts to squash the truth-telling in this important book. As years of work at Public Citizen promoting automotive safety has shown us, no issue will be more critical to shaping the future of safety on our roads. Bradsher, a Pulitzer-prize winning New York Times reporter with a years of experience covering Detroit, chronicles this growing debacle in an accessible, clear and impeccably informed style. His book is the clarion call necessary to continue the drive toward sa

Worth the read, fair and honest

Published by Thriftbooks.com User , 20 years ago
Despite what other reviews have to say, Bradsher offers a level-headed and fact-based look into how SUVs have grown so popular and the effects they are having on our roads and environment. Other reviews can talk about environmental extremism, but the fact remains: SUVs get worse gas mileage than regular passenger cars. In an accident involving an SUV and a passenger car, the SUV almost always wins. These are facts and Bradsher presents them honestly.

Published by Thriftbooks.com User , 20 years ago
SUV owners are mad! Mad at Keith Bradsher's controversial new book, High and Mighty SUV's: the World's Most Dangerous Vehicles and How They Got That Way ...In addition to Bradsher's historical survey of how SUVs got to be so large and so profitable, he's managed to produce the most important look at motor vehicle safety since Ralph Nader's 1965 Landmark Unsafe At Any Speed. Many of us owe Mr. Nader our lives, even though Unsafe At Any Speed was attacked in much the same manner as Bradsher's Book is now. Today even Detroit's Big Three agree that Nader spoke the truth 37 years ago, keep that in mind when you read the negative reviews of Bradsher's book. The vast majority of Americans trust the National Highway Traffic Safety Administration (NHTSA) to keep unsafe cars and trucks off America's roadways. I don't, NHTSA's relationship with Detroit remains much the same as Arthur Andersen's is to Enron.The sport utility vehicle is a uniquely American phenomenon originally created for the Army during WWII. Since then it has become the vehicle of choice for middle and upper class executives and soccer moms, few of whom (less than 5%) will ever use its off-road capabilities. This book should be required reading for anyone thinking about purchasing an SUV, especially since most current SUV owners mistakenly believe themselves to be safer than motorists driving regular cars. Bradsher points out that SUVs contribute to more than 3000 needless highway deaths annually - a toll greater than that of Sept 11th's World Trade Center disaster. The public needs to know that rollover death rates for sport-utes are double those of regular passenger cars and that SUVs kill non-passengers as well, causing an additional 2,000 deaths a year in vehicles they strike. Less well known is the tendency of SUVs such as the Ford Explorer to flip over after striking a guardrail or having a tire fail - problems that don't effect cars. Combined with the facts that sport-utilities pollute more, are harder to control, utilize under-sized brakes and consume more fuel than cars (all because of increased weight), SUV buyers need to think twice before purchasing these tanks on wheels. He concludes, "SUVs represent the biggest menace to public safety and the environment that the auto industry has produced since the bad old days of the 1960s."Not surprisingly, Detroit doesn't want prospective SUV buyers to read this book. Fearful of biting the hand that feeds them (SUVs account for the majority of the Big Three's profits), automotive journalists have publicly dismissed the book as nothing more than one man's Jihad against SUVs. In case you're unaware, auto manufacturers give automotive journalists free use of a new car 24/7 in addition to frequent press junkets to Europe and elsewhere to test-drive or observe their latest models. No wonder they started attacking the book weeks before it came out.As the publisher of crashtest.com, smartmotorist.com, smartcarguide.com, and carshownews.com I'm

In the tradition of Fast Food Nation

Published by Thriftbooks.com User , 20 years ago
High and Mighty will do for the auto industry, what Fast Food Nation did for the fast food indsutry: Expose all of its harmful shortcomings. High and Mighty shows that SUVs are NOT merely a guilty pleasure, they are dangerous and costly.If Mr. Bradsher's many critics would actually read High and Mighty, they would see that the classicficatoin of SUV owners as being vain, insecure drivers is NOT his opinion, it is taken directly from the market research conducted by the car manufacturers. Yes, the very people you are buying your SUV from have stereotyped you...Intelligent readers, pro and anti SUV alike, I strongly urge you to buy High and Mighty, and to read it. Learn the truth!
Trustpilot
Copyright © 2022 Thriftbooks.com Terms of Use | Privacy Policy | Do Not Sell or Share My Personal Information | Accessibility Statement
ThriftBooks® and the ThriftBooks® logo are registered trademarks of Thrift Books Global, LLC