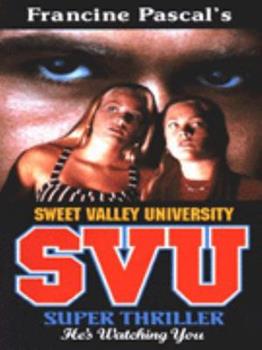 by Francine Pascal and Laurie John

This description may be from another edition of this product. Escaped mental patient William White has only one thing on his obsessive mind, Elizabeth Wakefield. He'll do anything to have her, even commit murder. A frightened Elizabeth doesn't know who is...

Brilliantly constructed! William White is dangerously creepy and holds you in SUSPENSE!

Published by Thriftbooks.com User , 15 years ago
The genius of this book must be commended. William White is back with an obsession for revenge for Elizabeth Wakefield. He has previously attempted to kill her (book #6 of the SVU series), stalked her mercilessly with creepy Shakespearean sonnets, morbid doll displays, and crank calls for months. Now he's back with revenge on his mind--and he'll go just far enough to get to her--including going after her in the most brutal and sadistic way. Though it was over all pleasing to read the continuation of the William White saga, I must say that there were a few things in this story that were a little too silly. The Braino act was kind of unnecessary. I think that the author could have come up with a better storyline instead of this silliness. William White should have revealed himself to Elizabeth in a different way. The braino mask deal was kind of cliche and overrated. So was the potentally predictable car accident which "supposedly" kills William. The story could have been a little better. Overall, a great suspensefull thriller. Just when you think that William White can't get any worse--he does. The attempt on Celine's life was completely out of left field. Not once did it occur in any part of the series (books 1-11) that William would want to get rid of his abling accomplice. Amazing where his insanity finally drove him to. A Five star book all around.

Published by Thriftbooks.com User , 16 years ago
William White,Elizabeth's Ex-boyfriend,a whacko who's obsessed with her escapes from Harrington Institution[a mental Hospital] He gets revenge against Elizabeth's friends Winston becomes Boppo,A clown cheerleader+ Mascot who comes out of a Sedan,a 4 door sedan singing Make Them Laugh. Denise Is With him. Make Them Laugh is from one of my favorite musicals,Singing In The Rain. He locks Jessica up in Marsden Garage,but someone gets her out. Todd saves everybody from William White. William White Dies,or so they think.

Published by Thriftbooks.com User , 20 years ago
wow this book has it all! i mean, it's scary, suspenceful, but it still has it's funny bits. it's a must-read. ok, the plots. william white is stalking liz. sending her treatening notes, leaving her things (such as a barbie doll that looks like her with it's head twisted). and he's framed todd so it looks like he's the one doing it!! william decides to kill all of liz's friends (tom, danny, nina, maia, denise, isabella, winston, everyone minus jessica), they're "too interfering". so in the book, he's hatching a plot to get everyone at the next school football game where he can get liz, and kill everyone else... a sideplot is winston trying to become the new "braino" a school tradition of a clown who performs at the school games. this adds humor to the story, as winston always does!! a definete MUST-read!!

one of the best books out there!

Published by Thriftbooks.com User , 21 years ago
This is one of the best books I have read! It was very scary, actually. I have a good imagination and I could picture everyone together being terrified, and each one of the main characters jumping out of the van, trying to save themselves. And I could picture William White's car blowing......Maybe you should read it for yourself. But it was not only scary and very suspenseful, it also had some romantic and funny moments in it too. If you love SVU, you'll LOVE this book! :)

Published by Thriftbooks.com User , 22 years ago
I read this book many times. Always enjoying it. I mean it has the elements every good book should with my favorite twins in the world. I love this one and it is a classic Sweet Valley!
Copyright © 2020 Thriftbooks.com Terms of Use | Privacy Policy | Do Not Sell My Personal Information | Accessibility Statement
ThriftBooks® and the ThriftBooks® logo are registered trademarks of Thrift Books Global, LLC