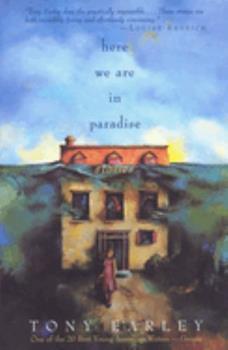 Here We Are in Paradise: Stories

This collection of stories, set in various locales of North Carolina create entire worlds and indelible moments as only the best short fiction does.

Some of the best short stories I've read

Published by Thriftbooks.com User , 21 years ago
These delicate short stories tell harrowing tales of love and loss with something rare in modern literature - absolute respect for the characters and the reader.I'm really looking forward to Tony Earley's novel that contains some of the characters from the last three stories in this collection.Bill

Published by Thriftbooks.com User , 22 years ago
I couldn't believe it when I heard this wonderful book is out of print!! How could we let this happen? Surely we could have found a spot on our bookshelves, one space between all the fluff for this priceless and rare book. A book that should teach us all a lesson. Treasure a gem if you find it, keep it somewhere safe, because you might find you've kept something even more valuable than you ever thought. I'm glad I found this particular gem of a book before the presses stopped. And Mr. Earley? How about just one more. I've saved a place on my bookshelf.

Tony Earley Kills me. Hurry up and write something else.

Published by Thriftbooks.com User , 23 years ago
Reading a contemporary writer is like sucking down an ice cold coke (not pepsi) from the bottle on a hot sweaty summer afternoon. Tony Early's writing is fresh and funny. It feels like a small river with quiet spots and then a series of rapids, and that's just the style of writing. You tell me, how could it be that when I just read "Charlotte" again, the pages blurred up at the same time that I was laughing? It was wasn't a funny laugh, it was a laugh of truth, only I have no idea what that particular truth is. I am truly mesmerized by this writing, these ideas. There is something simply wonderful about it. The irony shines. I just can't get handle on it. To paint this picture with such sarcastic glory, but not sarcasm really because there is enough respect there to almost believe that he beleives it. Damn, I love this story. I'll tell you what it just reminded me of: My grandfather was the chairman of the regional History foundation or something like that in Chattanooga, and he had to give a talk dedicating a park in East Lake. Some other man talked and got carried away. He got pretty emotional when he vowed that the park was probably one of the most scenic, meaningful and beautiful parks in the region, if not the state. Come to think of it, East Lake park probably ranked right up there with the most scenic spots THE WORLD OVER. I looked around at that point past the nodding heads of the 10 or 15 ragged people seated in those folding chairs and simply looked at that trashy pond full of and algae film. I took in the dented barrels surrounded by trash that did duty as garbage cans, I listened to the cars whine by a few yards away, and I sat in wonder. I think I learned something that day but I couldn't tell you what it was. Same feeling I get reading Tony Early.

Published by Thriftbooks.com User , 24 years ago
I first stumbled across Tony Earley's work in Best American Short Stories, in which "Charlotte" was featured. Since that time, I've eagerly awaited his first full-length collection of fiction. That debut, Here We Are in Paradise, is one of most well-crafted books of the year, and Earley has proven to be one of the finest portrayers of character in contemporary American fiction. Reader beware - Earley presents very few intriguing plot entaglements and no high-speed adventure in his stories of mostly small-town Southern life. Instead, his tales are small and delicate, placed in the slippery spaces that exist between human hearts. Earley has a grasp of the intricacies of relationships and feelings only matched by a select few of his contemporaries. In the tradition of Raymond Carver, Earley effortlessly identifies the thing in each of his characters which makes him or her a unique individual. With that individuality comes a sort of dignity, and Earley's characters become more than characters - they are real humans, who change and grow, albeit gradually, through each story. Earley's characters are significant not so much because of their outward actions, but because their inward humanity captures the reader's pity and respect. The main character of "Charlotte" struggles with his love of a girlfriend who is unable to reciprocate, the narrator in "Here We Are in Paradise" identifies the split between the woman she is to herself and the woman she must be for her husband, the son in "Story of Pictures" tries to deal with his mothers' obsession with his father's death and his own obsession with trains. Each of Earley's stories gives us a small glimpse of what it means to be human. It is the author's voice which truly separates him from the pack of young writers today. He is in no hurry to move the plots of his stories along, and the virtue of this languid pace is that it allows him to capture details unseen by most authors. It is in these small moments of the characters' day to day that they reach their most important revelations. In "Here We Are in Paradise," the narrator remembers a picture, with the words of the title scrawled on its back, which her father sent relatives after their life in California failed to live up to expectations. The young woman in "Gettysburg" maintains that the herpes which she passed along to her live-in boyfriend will at least keep him from ever forgetting her. It is these moments which reveal the individuality of each of Earley's characters. Each of the stories in Here We Are in Paradise climaxes as the main character reaches some sort of self-revelation. Unlike many writers, Earley tackles these moments sublimely without overstatement. There is no blinding light and no words from above, but some small ordinary event changes the way each character sees his or her world. Through their small actions and interactions, Earley's characters find their way in the world and identify their place within it.

Published by Thriftbooks.com User , 25 years ago
The first short story in this collection, "The Prophet from Jupiter," is the single best work of fiction I've ever read. Funny, evocative, sad, and amazingly complex. I read that after Tony Earley finished that story, he was afraid he'd never write anything ever again - it took that much out of him. The rest of the stories are stellar as well, the magical lives of people who have fallen into the cracks of American life
Copyright © 2020 Thriftbooks.com Terms of Use | Privacy Policy | Do Not Sell My Personal Information | Accessibility Statement
ThriftBooks® and the ThriftBooks® logo are registered trademarks of Thrift Books Global, LLC