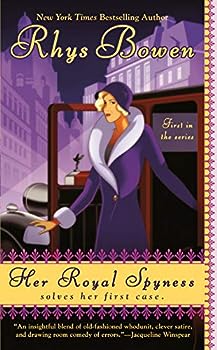 THE FIRST ROYAL SPYNESS MYSTERY The New York Times bestselling author of the Molly Murphy and Constable Evan Evans mysteries turns her attentions to "a feisty new heroine to delight a legion of... This description may be from another edition of this product.

Published by Blair , 1 year ago
I bought this book for my grandmother, who loves mystery novels. She was satisfied with the book, and read through it quickly. It arrived on time, and was in very good condition.

Very displeased to see a $.50 price tag on the front of this little paperback book I paid $4 for!

Published by Ripoff , 3 years ago
Worth fifty cents!

Published by Thriftbooks.com User , 15 years ago
This is the first book I have read by this author, Rhys Bowen, but I can assure you it will not be the last. To be honest, this work had me hooked after only three pages. I realize that this offering is classified as a mystery, but, in my own mind, it may be just a click or two off the standard book in this genre. Yes, there is a mystery, involving one dead Frenchman in our heroine's bathtub, but the mystery part of the book is sort of a by- product of a well told story. Observation, character development and wonderfully unlikely situations make this story. To be frank, as dense as I am, I had the "who done it" part figured out quite quickly. That is just fine tough, as the strength of this book lies elsewhere. This work is absolutely hilarious. The plot, which has been told and retold here by other reviewers, simply put, concerns a young member of the royal family, set in England and Scotland, in 1932. The young lady has found herself cut off from what little family money there is, has no servants, is absolutely clueless as to how to even start a fire, much less prepare a meal other than toast and warmed over baked beans. She finds herself, on her own, in prewar London. It has been pointed out by a couple of other reviewers that perhaps this work may be of more interest to women than to men. This could be true, but if you are like me, you will read just about anything as long as it is well written. Another point mentioned by a couple of reviewers is that the attitudes displayed by many of the characters in this book fit our times, socially, rather than those of England in the 1930s. I do respectfully disagree with this observation. The attitudes may not have been physically manifested during those times, but I can assure you the thoughts were there. This book is well written. Mrs. Bowen is a natural story teller with quick wit and a wonderfully understated sense of humor. Some of the observations our main character makes will have you laughing out loud as they did me. If you are looking for a easy read, a read that is simply fun and want a few laughs, then this one is for you. I do highly recommend this one. I do hope we see more of Victoria Georgiana Charlotte Eugenie, daughter of the duke of Glen Garry and Rannoch.

Lady Georgiana Sets Out on Her Own

Published by Thriftbooks.com User , 15 years ago
Lady Georgiana has a problem. She's over the age where she should be married, but she's still single. And her brother has just cut off her allowance. Now if you're thinking, "No problem, just get a job" then you need a few more details. See, Georgie is thirty-fourth in line for the throne of England and this is 1932 London. Even though she has no money, working is beneath her class. Beside, what can she really do? Georgie doesn't let that stop her, however. She starts trying her hand at anything she can think of, as anonymously as possible of course. And she may have found the perfect way to make some money to support her self. That is, until she finds a very dead man in her own bathtub. How did he get there? And, more importantly, is Georgie's life in danger? I've been a devoted fan of Rhys Bowen's work since I discovered it five years ago. So buying this book was a no brainer. And I must say I enjoyed it. The mystery itself was a little slow, especially at the beginning. Once it got going, it held my interest until the end. And I was completely stumped, figuring it out only when Georgie did. What kept me going was Georgie herself. She is lots of fun with a great sense of humor. Her narration had me grinning most of the way through the book. She's just the right mix of upper class and realist to be immediately likable. This book is as much about Georgie's search to support herself as it is the mystery. If read as such, it will be very satisfying. Light and fun reading.

Published by Thriftbooks.com User , 15 years ago
Wow, this is a wonderful book. I thought I would mildly enjoy a light period mystery, but I had no idea this book would turn out to be so funny, charming, and well-written. It reminds me of the fabulous "The Lost Art of Keeping Secrets," "I Capture the Castle," and "Gone with the Windsors," two of my favorite books. While reading "Her Royal Spyness," I found myself continually looking at the cover and the back, making sure this was actually "just" a cozy mystery. It is so well-written, the characters so delightful and well-drawn, I have to say that, while I love mysteries, this book is a cut above the rest. Bowen draws a marvelous, and hilarious, portrait of young, slightly silly, but rather lovely and eccentric, royals, running around '30s London, getting into funny scrapes. More than for the mystery (although the mystery is excellent as well), read this for a delightful picture of high society amongst impoverished minor royals in the 1930s.

Published by Thriftbooks.com User , 15 years ago
Her Royal Spyness by Rhys Bowen is the first in a new series starring Lady Georgie, 34th in line to the English throne and penniless. Her brother has cut off her allowance, and the queen is trying to get her to marry Prince Siegmund of Romania who Georgie and her friends have nicknamed Fishface. So Georgie moves into the family townhouse in London and attempts to make a go of it on her own. But with no servants in residence, she has to learn how to lay a fire, do basic housekeeping and feed herself. She gets a job at Harrod's and loses it five hours later, so she hires out incognito as a light housekeeper. In the midst of all this, a dead body shows up in her bathtub, and she's a top suspect. In order to lift the blame from her family, Georgie investigates the murder and digs up all sorts of dirt. I love Bowen's Molly Murphy series, and this is equally delightful. Georgie is hilarious in her ineptness, and her family is filled with the types of quirky characters necessary for a true cozy mystery. The book has lots of royal trivia and etiquette, as well as appearances by Wallis Simpson. While the murderer may seem a bit obvious, Georgie's lack of guile makes it ok for her not to pick up on it as quickly as readers do. God bless Bowen for giving readers as much info as Georgie so that we can solve the mystery on our own. This is a series that promises to be loads of fun.
Trustpilot
Copyright © 2022 Thriftbooks.com Terms of Use | Privacy Policy | Do Not Sell My Personal Information | Cookie Preferences | Accessibility Statement
ThriftBooks® and the ThriftBooks® logo are registered trademarks of Thrift Books Global, LLC