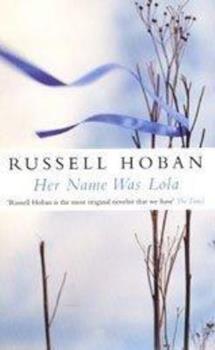 Her Name Was Lola

This description may be from another edition of this product. The irresistibly witty, endearing and captivating new novel from the inimitable Russell Hoban--who has been compared to Tolkien and Lewis, Salinger and Vonnegut--about a hopelessly conflicted man torn...

Published by Thriftbooks.com User , 16 years ago
London-based American writer Hoban, who has written 12 novels for adults and over 60 children's books, gives us London-based (possibly American - he's always being taken for a visitor) writer Max who writes "novels that don't sell, children's picture books that do." One of Hoban's novels is the majorly successful "Riddley Walker," but Max is also about 35 years younger than Hoban, so the comparison, invited by his story-within-a-story form, holds and the dedication to a friend, "a.k.a. known as Seamus Flannery," the character who happens to be Max's best friend, reinforces it. The book opens in 2001 when Max, suffering "blighter's rock," over both his novel and his children's book, collects an unlabeled CD in the mail, and goes to meet Seamus for lunch. Suddenly "the world becomes not there and he has to stop in his tracks while he sees nothing but moving shapes of black. ...He'd like to think it's his mind playing up but this feels as if it's coming from somewhere else. The black shapes are as sharp as double-edged razor blades and Max fears that if he makes a wrong move blood will come out of his eyes and ears and nose and mouth. What would be a wrong move? A wrong thought?" When the world returns, a foul smelling, ebony-skinned dwarf is writhing on the ground toward him and demanding to be carried. He is heavy, and while no one else can see him, Max has to claim an injured back to explain his posture. With the help of his mind (a major, talkative and sensible character) he places the dwarf as Apasmara, the Hindu demon of forgetfulness and, with a little more help, remembers the CD, an Indian raga. "Lola!" The love of his life, his proudly proclaimed "destiny woman", the woman he loved and lost in less than a year; Lola has sent the raga and the dwarf to wipe his every memory of her. As his memories flood back, short chapters shift between 1997 and 2001. Then, too, there was a book that wouldn't get started. Max recalls love at first sight, deepening as he and Lola discover a shared world of music and poetry and art. Lola Bessington, self-assured daughter of London aristocrats, half engaged to tall, handsome well-to-do Basil Meissen-Potts, is a bit resistant at first, but Max, convinced of his destiny, wins her. But there are things she doesn't know about Max. He has a history of falling in love - and out again. "In all fairness he ought to have been wearing a sign that said, IT AIN'T NECESSARILY SO when he appeared in the Coliseum Shop in 1996 and said that Lola was his destiny woman." When he meets the brash and beautiful Lula Mae he succumbs, no, pursues temptation. His mind tries to warn him, Lola tries too, but Max wants what Max wants. Then, having lost Lola, he's bereft. It's 1997 and suddenly his novel takes off with an artist named Moe who loses the world and acquires a dwarf named Apasmara. Max and Moe dialogue; Moe demanding to know where this dwarf came from, Max confused but sure it has something to do with Moe's as yet unkno

Published by Thriftbooks.com User , 17 years ago
I read this novel largely on the basis of an enthusiastic review in the Washington Post, and it made perfect weekend get-away reading (although it was too much fun to spread out over the whole weekend; I finished it on the first day). It is neither as ambitious nor as accomplished as the Post review suggests, but it is a delightful and intelligent comic romance.
Copyright © 2020 Thriftbooks.com Terms of Use | Privacy Policy | Do Not Sell My Personal Information | Accessibility Statement
ThriftBooks® and the ThriftBooks® logo are registered trademarks of Thrift Books Global, LLC