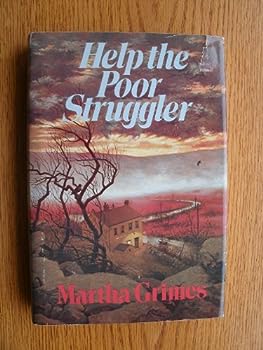 (Book #6 in the Richard Jury Series)

This classic mystery in the "New York Times" bestselling series finds Jury joining forces with a hot-tempered constable to track down the brutal killer of three children. Reissue.

Published by Thriftbooks.com User , 12 years ago
Alot of mysteries feature cats. This one features cars...and a dog named Henry. Master mystery writer Martha Grimes weaves a spooky tale in "Help the Poor Struggler", which begins with a grim murder of a woman named Rose Mulvanney. Rose is discovered by her 5 year old daughter Teresa. Then the story jumps forward 20 years later into a mystery surrounding a spree of child killings. Scotland Yard's Richard Jury quickly determines a young heiress, Lady Jessica Allen-Ashcroft is the next target, or perhaps better put, THE target. Lady Jessica is an orphan, heiress to a huge English manor house and four million pounds. She lives with her Uncle Robert, who adores cars. So does Lady Jessica. So she buys him nine...Well, actually eight. The mini Cooper is hers. Suddenly Jury's friend, Melrose Plant (former earl) appears at Ashcroft manor in his white Ghost Rider. Now he and Jury must quickly discover the identify of the child killer before Lady Jessica is the next victim. And suddently this case becomes connected with the cold case file on Rose Mulvanney. Grimes is brilliant in weaving her story line, in developing characters you adore (such as Lady Jessica and Melrose's horrible Aunt Agatha) [Martha Grimes, if you are reading this, could Aunt Agatha be your next victim in your next Richard Jury book?] There is suspence, humor, and deep emotion in this wonderful mystery. Don't miss it!

Published by Thriftbooks.com User , 16 years ago
This is an Onyx 2005 reprint of a 1985 novel. It is a little on the dark side, and a change of pace from the author's early novels in the Jury/Plant series. No side excursions into Long Piddleton, or side issues about flashers. Perhaps the author was developing a more serious side. You do need to read some of the earlier novels to understand the Jury and Plant characters. The story starts with a prelude about a murder where the wrong man is convicted. The only witness, the victim's 5-year old daughter, is left catatonic and unable to point out the killer. The wrong man is convicted of the crime and sent off to prison, simply because he was infatuated with the victim. Now it is 20 years later. A serial killer is murdering children in the same geographic area as the earlier murder. It appears to be the work of a psychopath. The police are attempting to link the killings and various suspects show up on the scene - the man, just released from prison, who was convicted of the earlier murder; an agoraphobic photographer who seems a bit mysterious; and various relatives who might inherit money if Lady Jessica, a 10-year old heiress, should happen to die. Events and police work bring the story to some surprising conclusions. The novel is split into 28 chapters.

One of her very best

Published by Thriftbooks.com User , 16 years ago
I am only just discovering Martha Grimes' Richard Jury/Melrose Plant mystery series, having read nine of them this year, so I'm coming late to this 1995 pub. But I have to take a moment and rave about it. The subtle and complex plotting is brilliant, with no unfair disclosures (well, perhaps one little one: how DID "Selfless Sara" manage to get hired into the Ashcroft household?) but lots of delicious twists and turns. Some later titles are loosely written and self-indulgent (she has become too big for an editor to tighten up), but this one is a page-turner throughout. That three seemingly random murders of innocent children are connected, and even tied to the murder of two other girls' mother 20 years earlier? Yes, and you'll be delighted to discover how.

Published by Thriftbooks.com User , 17 years ago
The tiny hamlet of Clerihew Marsh is the site of the murder of Rose Mulvanney. Her five year old daughter calls the operator to summon assistance. Wiggins and Richard Jury are interested in another matter years later in Dorchester. The victim is Simon Riley, son of a butcher. It is wondered if Davey White in Wynchcoombe is somehow connected to the incident of Simon Riley. The second boy has been placed in a church. His grandfather and guardian is vicar there. Help the Poor Struggler is, not surprisingly in a book from the Richard Jury series, a pub. Molly Singer wears off the rack Oxfam clothes. She will not speak to the police. The latest victim is Angela Thorne. She is wrapped in a cape belonging to Molly Singer. It seems that Molly Singer is Mary Mulvanney, a daughter of the years-ago murder victim. It is pleasant to read a Richard Jury mystery because he appears complete with ensemble players. Half-way through this book Melrose Plant turns up at the Jack and Hammer along with the Long Piddleton antiques dealer, Marshall Trueblood. Jessica Ashcroft, a child and Jury's candidate for next victim, is all ready to service Plant's Rolls Royce which fails just outside the wall of the Ashcroft manor house. She claims to know about cars and welcomes him into the premises which is the plan as conceived by Plant and Jury. Chief Superintendent Racer is concerned over the nonsolution of the cases. As Jury continues his investigation he surmises that the cases are connected since the sites, Princeton, Clerihew Marsh, and Wynchcoombe are equidistant from each other and from Ascroft Manor. Simon's stepmother has an Ashcroft connection it is ascertained. The vicar of Wynchcoombe is related too. The story is well-plotted. This is a lovely book. The character of the child, Jessica Ashcroft, is just right.

Published by Thriftbooks.com User , 19 years ago
This is my favorite Richard Jury book. I certainly loved the character of Lady Jessica; but this book also introduces Brian Macalvie, an important character in the series.
Copyright © 2020 Thriftbooks.com Terms of Use | Privacy Policy | Do Not Sell My Personal Information | Accessibility Statement
ThriftBooks® and the ThriftBooks® logo are registered trademarks of Thrift Books Global, LLC