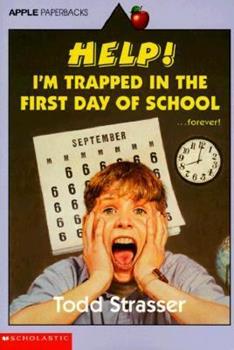 Help! I'm Trapped in the First Day of School

Now that Jake Sherman is friends with super-cool Alex Silver, they'll be the kings of the eighth grade. And to make absolutely sure that everyone know it right away, they have a hilarious prank ready for the first day of school. But just when Jake thinks he's got it made, he realizes that he has to go back to the beginning-and start his first day of school all over again...and again...and again! Can Jake break out of this endless pattern? Or is he...

HELP! I'M TRAPPED IN THE FIRST DAY OF SHOOL ...forever

Published by Thriftbooks.com User , 17 years ago
Help! i'm trapped in the first day of school is about a boy named jake sherman and he has a friend named alex that just wants to bother 6th and 7th graders because ever since they were in 6th grade the 8th graders bothered them now because there in 8th grade there naming them selfs knights of wedgy

Published by Thriftbooks.com User , 19 years ago
I recently picked this book up at a second-hand store while looking for kids' books. I'd never read this before but I thought it was based on an article/story in a magazine I remember reading in school in 7th grade about the same situation; being "stuck in the first day of school": waking up every day and having to start over again! I don't remember what magazine that was that that story was in; supposedly it was some educational/religious magazine since I was at a Christian school that year, however when I read this book, I discovered this book wasn't what I thought and probably had no connection with the story in the magazine although both were similar. When I read the first episode in the book about the first day, I was so mad at the main character's buddy Alex for how he treated people, especially poor Ollie, that I was just going to put down the book and not read it anymore but I'm glad I didn't because it gets better and better with every repeat first day of school! I cracked up laughing about the cafeteria's rotten food in spite of myself. That'd be awful but Alex the smart aleck got what he deserved, biting into a burger with rotten meat. I can't remember the main character's name, but we see him become a stronger person instead of a follower of the bad seed Alex, as he takes Ollie the new kid under his wing and saves his house from a fire, and befriends the new girl Amber; they have a great friendship going on!! The ending was wonderful. I like this book a lot better than that article I said I read in 7th grade that was similar to this story because it had a happy and satisfying ending, whereas the one in the magazine left you hanging on a cliff practically! Very clever story, beautifully written. Kudos to Mr. Strasser, keep up the good work!

Published by Thriftbooks.com User , 22 years ago
I really enjoyed this book. I rated it 4 stars because I did not like the ending that much. If you have the money for this book I would buy it but you could find WAY better books by Todd Strasser than this but it is still very GOOD!

Help! I'm Trapped in the First Day of School

Published by Thriftbooks.com User , 23 years ago
Are you looking for a funny book that is exciting and will keep you on the edge of your seat? Well Help, I'm Trapped in the First Day of School is just that. It tells the story of a boy named Jake and how he learns the truth about his new best friend, Alex. After Jake gets stuck in the first day of school with Alex six times in a row, he figures out that Alex isn't quite as funny as he first appeared. Jake learns that there is something he must do about his new best friend in order to stop the first day of school from coming again each day. The most hilarious part about this book was when Alex tries to tell the teacher about a nature wedgie and a Melvin wedgie. One of the most exciting parts is when Jake figures how to get out of the first day of school. I would recommend this book to someone who has a good sense of humor about kids who like to joke around in school.

Published by Thriftbooks.com User , 24 years ago
Jake Sherman is a knight of wedgie with Alex Silver. He tortures Ollie, Gets insulted by Amber, etc. But the next morning, everything is the SAME! Will he have to repeat the first day of school AGAIN?!?!
Trustpilot
Copyright © 2022 Thriftbooks.com Terms of Use | Privacy Policy | Do Not Sell My Personal Information | Cookie Preferences | Accessibility Statement
ThriftBooks® and the ThriftBooks® logo are registered trademarks of Thrift Books Global, LLC