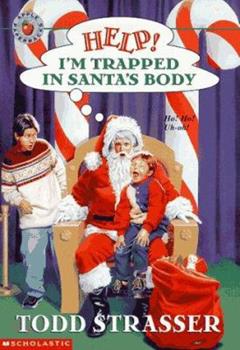 This description may be from another edition of this product. Santa is tired of being Santa. He hands Jake a small red and green envelope, and WHUMP--Jake is at the mall listening to kids ask for presents and pulling at his beard!.

Published by Thriftbooks.com User , 11 years ago
My 11 year old loves this series of books. She has so much fun reading them and it only takes her a day and a half to get through them. They are intriguing and funny. Check 'em out! :)

Published by Thriftbooks.com User , 13 years ago
ISBN 059002972x - Books that will appeal to boys, especially books in a series, always have a special place in my heart. It isn't hard to interest boys in reading, but it can be a challenge to keep them interested and a good series goes a long way! The Help! I'm Trapped... series (marked for ages 9 to 12) is a fun one. Jake, Andy and Josh work on their Christmas lists and their greed and selfishness, unintentional though it is, shows. When one wants three things, the next wants those three and one more; when Jake gives his list to his father, he points out which stores have the best prices - and manages to mention that his father "owes" him a hockey stick. Clearly, the spirit of the holidays is missing and it isn't just Jake and his friends. When Jake's family goes to visit Aunt Elma without Jake, Santa crash lands in his backyard and promptly begins to talk about quitting. Once Jake accepts that this man really IS Santa, all he's got to do is convince him not to quit. As for Santa, he'd like to convince Jake that beings Santa isn't much fun. Toward that end, he arranges for Jake to be Santa, just for one day. Jake is appalled at the rampant greed he encounters. Who will convince who here? Will Santa really quit? For those who care, pro and con, there is no mention of the religious aspect of the holiday. If you're worried that greed and selfishness aren't great topics for your kid at Christmas, they're mentioned mostly as a way to compare them to charity and kindness. The only negative I could find was that the book doesn't exactly explain how Jake gets trapped in Santa's body. On page 67, it says "I'd heard that whump! before. It was the same sound Mr. Dirksen's intelligence transfer machine made when it switched people into different bodies." and that is all the explanation there is. That makes this a bad book for newcomers to the series to start with. Other than that, it's a nice message told in a fun way; kids will enjoy it and parents might too! - AnnaLovesBooks

Published by Thriftbooks.com User , 22 years ago
This book was very good. You got the real feel of the Christmas spirit. Well written and fun to read. A little more dramatic than some of Strasser's other books, but still very good! The perfect holiday book for people of all ages!
Copyright © 2020 Thriftbooks.com Terms of Use | Privacy Policy | Do Not Sell My Personal Information | Accessibility Statement
ThriftBooks® and the ThriftBooks® logo are registered trademarks of Thrift Books Global, LLC