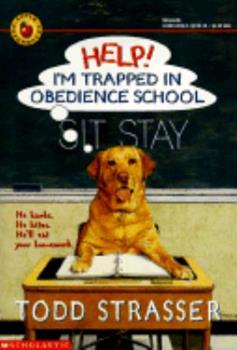 This description may be from another edition of this product. After Andy presses the wrong button on a weird machine and turns into a dog, his friend Jake tries to help him turn back into a human.

Published by Thriftbooks.com User , 12 years ago
The Main characters are Jake and his friends Josh and Andy. They were going 4 a walk to their teacher's house. The DITS, what their teacher invented, has never been seen before by Josh and Andy. Jake had brought his dog, Lance, on the walk, too. Lance immdiately layed down, in one of the machine's cages. Andy walks near the chair. Meanwhile, Josh was saying, ..."Oh, I get it" he walked over to the machine, also..."And the hunchback flipped the switch!" Josh grinned. He flipped the switch. WHUMP! Andy and Lance switched bodies. The ending was so FUNNY, you would laugh and laugh until you get the hiccups. Very weird and also intrtainng!

Published by Thriftbooks.com User , 17 years ago
my book is about a dog named Jake.who has a weird machine.it accidentiy went offand turned his friend Andy into a dog.Andy acted like a dog and was glad he did'nt have to go school.But he ended up in obedience school.His friends tryed to fix it.I recomend this book to people that like weird plots.

You wanna know? here's the place to go!

Published by Thriftbooks.com User , 18 years ago
Help! I?m trapped in obedience schoolBy Carson I read, help! I?m trapped in obedience school. It?s written by Todd strasser, and the genre is fiction. He also wrote all the other, help I?m trapped in? books (he wrote the whole series). The plot is that, a boy named Andy, switches bodies with Jake?s dog, lance (Jake is the main character), and the things they go through at home, school and on the streets. Andy is gross because he shoots spitballs through his nose. He?s stubborn because he doesn?t want to turn back into a human because as a dog he gets to be lazy and not wash. This book is funny because Jake keeps trying to talk to Andy. This makes every one stare at him (they don?t know that Andy is in lance) that happens on page 48, in obedience school.Jake and Josh some times walk over to Andy?s house, I walk over to my friend?s houses all the time. Jake has a pet and so do i. Jake has a dog, I have reptiles. Jake is a good kid (he?s not a troublemaker) because he doesn?t give people answers in school, and he doesn?t like it when his friends make fun of his sister. He?s persistent because he keeps trying to get Andy into his own body even after Andy doesn?t want to, and he?s been made fool of, he even makes up excuses to get Andy into his old body. Then as soon as Jessica (Jake?s older sister) says "its time to get groomed" then suddenly Andy doesn?t want to be a dog any more. After that they sneak into Dirksons (dirkson is the science professor) garage so they could use the d.i.t.s. To switch Andy back to?well Andy. There?s only one problem? well you have to find out for your self.Can you guess what happened?

Published by Thriftbooks.com User , 18 years ago
This book by Todd Strasser is the best dog book I have ever read. In this book, Jake, Andy (Jake's best friend), and Lance (Jake's dog) go into Mr.Dirkson's (Jake and Andy's science teacher) garage. Then Jake presses a button and makes Andy and Lance switch bodies. I'm not going to tell you anymore or else I would spoil it for you. Good-Bye!

Published by Thriftbooks.com User , 22 years ago
It is about a boy that got turned by a machine into a dog and the dog turning into that human. The human goes around sniffing things while the dog puts his hands on his hips. There are alot of other silly things like that. I giggled all the way through.
Copyright © 2020 Thriftbooks.com Terms of Use | Privacy Policy | Do Not Sell My Personal Information | Accessibility Statement
ThriftBooks® and the ThriftBooks® logo are registered trademarks of Thrift Books Global, LLC