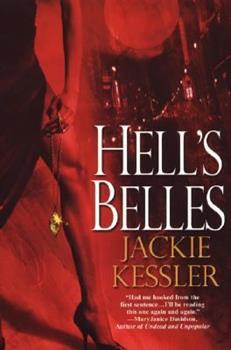 (Book #1 in the Hell on Earth Series)

She's A Hot Demon On The Run From Hell-- Which Isn't Easy To Do In Heels. Once upon a time, Jezebel was a powerful succubus, capable of seducing men and sucking out their souls. But that was before Hell put a bounty on her head. Now her only chance to escape a fate far worse than death is to live as a mortal, losing herself in a sea of unfamiliar humanity, in a place where sinners walk hand-in-hand with saints--a place like Belle's strip club in New...

Published by Thriftbooks.com User , 15 years ago
I love, love, love this book. Why, you ask. Well, lots of reasons, the biggest of which is that the voice of the main character, Jezebel, rings true throughout the book. She embraces in the mortal realm aspects of her former demon self. She falls for a guy and doesn't suddenly become a mindless idiot. KUDOS to Jackie Kessler for a well-written book with a great story. I cannot wait for the next in the "Hell on Earth" series.

Published by Thriftbooks.com User , 15 years ago
Hell's Belles tells the story of Jezebel, a succubus who runs away from Hell to hide out in the human world. In doing so, she gets a job as an exotic dancer, falls for a human, and must navigate both mortal and immortal dangers. Wacky mishaps--and a lot of action and sex!--naturally ensue. The thing that really makes this book amazing is Jezebel's voice. Her narration is fast, light, and witty and immediately sucks you in. She feels REAL and lets the reader truly see through her eyes, with a viewpoint that is both cynical and innocent as she learns about humanity. Her observations and snappy dialogue will leave you laughing and wanting more. This is a great read -- don't miss it!

Hell of a Sexy Romp

Published by Thriftbooks.com User , 15 years ago
If Angels & Demons and Pulp Fiction had a love child, it would be Hell's Belles! Jackie Kessler is a new refreshing voice in the cluttered world of paranormal romance. This book is a face-paced humorous romp with suprising heart and soul. Jezebel has pissed off the Lord of the Underworld so now all Hell is after her. She tricks a witch into making her human, therefore undetectable to evil-doers, and hides out as a stripper in NYC Gentleman's Club. What she didn't count on when taking human form, besides an adverse reaction to milk, is all those inconvenient emotions, especially love. Just when we think Jess will find her happily-ever-after, all Hell breaks loose. As someone who doesn't usually read books written in first person, it was well worth taking the chance. Kessler's characters are so well-written, I didn't notice the POV. Now I'm looking forward to the second book in the series.

What could be more exciting for a devilish female than seducing men for their souls?

Published by Thriftbooks.com User , 15 years ago
Courtesy of CK2S Kwips and Kritiques What could be more exciting for a devilish female than seducing men for their souls? For millennia Jezebel "Jesse" had been enjoying her demonic life as a succubus. Until the day she spun on her cloven hooves and hightailed it out of Hell to escape the Underworld's ruler that is. Now she's in disguise as a mortal woman in New York City hoping the bounty hunters don't find her. She takes a job as an exotic dancer in a strip club called Belles. What could be a better job for a sex expert on the lam? Unfortunately for Jesse, she wasn't counting on an even worse fate leaving her shaking in her stilettos... Love? Paul Hamilton is making an escape of his own. He has suffered loss and longs to get away from his memories. When he bumps in to Jesse on the train to New York, something sparks between them, making him think maybe it's time to move on. But Jesse is hiding something, and that secret she holds is dangerous not just to her, but everyone she meets. When that mystery catches up to them, it will take all of Jesse's strength and newly discovered emotions to win this deadly battle. What a fun sexy story! Jackie Kessler has a winner on her hands with Hell's Belles. (Gotta love that title.) I knew just from the book's description this had to be a dazzler and I was not disappointed. Sarcastic and witty with plenty of dark humor, readers will be beguiled by Jesse's escapades. One of the things I got quite a kick out of was seeing the reversal of good and evil in Jesse's mind. (Where the worst thing you can say to a person is "Bless you.") We are given hints throughout the book to the "Great Announcement" that instigated Jesse's flight from Hell but when we discover what it was, the twist in the story packs quite a punch. Having read (and loved) Dante's Inferno in high school, I couldn't help but pick up on the nods to this great classic in Kessler's descriptions of Hell. The different areas of her Hell mirror many of Dante's Circles. Details are so vivid that I could see everything through Jesse's eyes, from her longing for such a place of fire to her reactions in mortal life. As a being that is very sensual in nature, all of Jesse's thoughts and impressions are very physical, from the smell of brimstone to the touch of Paul's skin, and even her very first sinfully decadent taste of chocolate. The passion between Jesse and Paul is flaming hot and bright, rivaling only the Lake of Fire in its intensity. The detailed yet not overly graphic descriptions of their relationship are strong enough to please the most avid of erotica readers but not too explicit for readers who prefer a few things be left to the imagination. If you are looking for a fast paced adventurous read that is full of dark humor and sexy enough to singe your eyebrows, then Hell's Belles by Jackie Kessler is the book for you. You will be left longing for the next book in the series, The Road to Hell, due out in November 2007. I don't know about y

Published by Thriftbooks.com User , 15 years ago
Okay, first the reason why you see five stars, but I'm stating 4.5 stars in the heading. The end of the book was cruel, heartless, demonic. No, the story ended just fine (spoiler, sorry), but... the author put a teaser for the next book after the ending, whetting my appetite for more. Even that would have been fine IF the next book was available, but nooo, it doesn't come out until November. Okay, whining pout over. When I state that Hell's Belles is original, it is Lucifer's own truth. The heroine (Jezebel) is a Demon from Hell itself, fighting for her very identity. She is never apologetic about her demonic personality, and it comes through loud and clear throughout the book. Evil thoughts are "über cool". Giving a girl flowers is nice because "they die so quickly, which is thoughtful of them". Born and raised in hell with more than 4000 years of experience killing men with Lust (yup, capital "L"), she enjoys walking her victims into the pits of hell and watching them burn, get boiled in oil, whatever punishment fits their crimes. She is also the most likeable and morally honest character I have read this year. Figure that one out. All the basic storylines are listed in the reviews, and still you won't be able to put this story together without reading it for yourself. It is exotic, erotic, dramatic, comedic, a love story, a morality tale, a thriller, a paranormal. Despite my first paragraph pout, it is a complete story, not a cliffhanger - a very large plus for me. Not for the young or those who are unable to look at religion from different perspectives, but those who like an excellent, sexy tale that is outside the norm, this book is VERY HIGHLY recommended. I had a grand time reading this novel, thank you, Ms. Kessler.
Trustpilot
Copyright © 2022 Thriftbooks.com Terms of Use | Privacy Policy | Do Not Sell My Personal Information | Accessibility Statement
ThriftBooks® and the ThriftBooks® logo are registered trademarks of Thrift Books Global, LLC