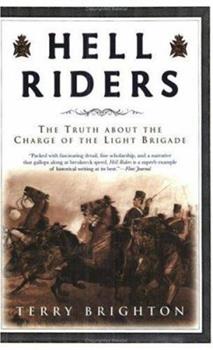 Hell Riders: The Truth about the Charge of the Light Brigade (John MacRae Books)

"An outstanding work that strips away much of the nonsense that has surrounded a tragic military blunder . . . [a] splendid examination." --Booklist On October 25, 1854, acting in defense of their base at Balaklava during the Crimean War, the Light Brigade of the British Cavalry Division made the most magnificent and brutal charge in military history. Seven hundred men armed with sabers and lances charged straight at the muzzles of Russian cannons...

Published by Thriftbooks.com User , 15 years ago
I read the book simply for informational purposes. I had read and known Alfred Lord Tennyson's famous poem "The Charge of the Light Brigade"...but aside from the poem, I didn't know that much about the actual event itself. I found Brighton's book at a local bookstore and after reading a few random selections, I decided to purchase the book as I found the writing style easy to read. This book deals with the actual events surrounding the disastrous cavalry charge led by Lord Cardigan during the Battle of Balaclava on October 25, 1854 in the Crimean War. The Brighton puts forth his opinion, but is careful to admit it is his opinion and even offers a few other conventional views on where the blame may or may not lay. Each view balanced with the pros and cons of the varying opinions. Brighton's writing stle is easy to follow and read. I actually read through this book much faster than I had originally anticipated. Even though the subject matter only had a slight interest to me, I was taken in by the storylines surounding the events and opinions as to what actually happened and why. As an added bonus, Brighton added a short epilogue for the characters and follows a few of them into their future beyond the battle to inform the reader as to what eventually happened to many of them. This in some cases serves as a stark reminder of "how soon we forget" as many ended up in disappointing life situations later in their lives. I would recommend this book to anyone interested in getting a sense of the event itself delivered in a very readable format.

Not quite the whole Truth

Published by Thriftbooks.com User , 16 years ago
This book by Terry Brighton (TB) is well-written and would appear to be the last word on the Charge of the Light Brigade. Not so, in my opinion, as it is contemporary and follows on closely from another recent book on the same topic (The Charge - Why The Light Brigade was Lost by Mark Adkins). One should read the other book by Mark Adkins (MA) as well to get the full flavour of this dramatic event. The MA book had a really interesting approach - once the positions of individuals or units were determined, their schematic locations were drawn onto perspective diagrams which were based on real photographs as seen by Raglan. Having determined that there were four individuals by which History will always judge to have been responsible, MA then shifts the blame onto Nolan's lap by postulating that Nolan had meant to mislead. TB's book is an analysis of the charge as recorded by the individuals involved, another interesting approach. He debunks MA's theory as mere speculation (rightly so) but that is to do disservice to MA's book which was a well-crafted book in its own right. TB's book states that Lucan was responsible, and so the blame game goes on.
Trustpilot
Copyright © 2022 Thriftbooks.com Terms of Use | Privacy Policy | Do Not Sell My Personal Information | Accessibility Statement
ThriftBooks® and the ThriftBooks® logo are registered trademarks of Thrift Books Global, LLC