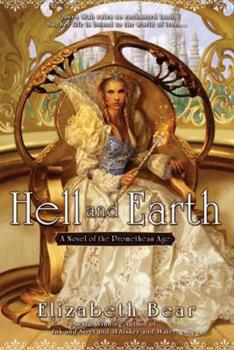 Hell and Earth: A Novel of the Promethean Age

From the atalenteda (Entertainment Weekly) award-winning author of Whiskey and Water and Blood and Iron, Kit Marley and William Shakespeare are playwrights in the service of Queen Elizabeth, employed by the Prometheus Club. Their words, infused with magic, empower Her Majestyas rule. But some of the Prometheans, comprised of Englandas most influential men and mages, conspire to usurp the Queen. Able to walk in both worlds, Kit seeks allies to aid...

These signs forerun the death or fall of kings.

Published by Thriftbooks.com User , 13 years ago
This is the sequel to _Ink and Steel_, and readers should definitely start there first. Kit Marley has made a deal with the devil and Will Shakespeare is freed from Hell. But Elizabeth's health is failing, those who intrigue against her are as strong as ever, spreading plague and killing poets such as Spenser who defend the Queen with the magic of their words, and events are echoed in Faerie where Queen Mebd is also threatened by intrigue. Kit continues to act for the Queen of Faerie, as well traveling to London to aid his friends, and he is searching for the killer of Shakespeare's son. He also needs to deal with his past, when he was captured and tortured by the same enemies who threaten the sovereignty of England now. An Elizabethan age, full of plots and treason and dark magic comes alive in this conclusion to The Stratford Man story. Even more marvelous are the characters; aside from Marley and Shakespeare (who are enough to fill any tale by themselves), there are their fellow poets and playwrights, Ben Jonson and George Chapman; there is Burbage and the players; Elizabeth's nobles and ministers--the Cecils, Walsinghams, Oxford, Essex, Raleigh, and various friends and relations. And the creatures of Faerie are also a natural fit to the world of this book, with the Queen and her sister Morgan, Puck, and the sleeping Arthur, and the unquiet trees. There is also Lucifer and an angel. And because words and poetry have power and import, the language is luxurious and quotations abound, making this rich, strange world even more complex and beautiful. There is also not a little action and suspense and a worthy climax or two or three. And there is a necessary Epilogue wherein we are sad and talk of the death of kings... of repentance and salvation. This duology is beautiful and horrific, sorrowful and amusing, gripping and fun. It's well worth a first read along with a second or third. Writing like this is one of the joys of life.

One of the best books I've read this year!

Published by Thriftbooks.com User , 13 years ago
Elizabeth Bear's duology featuring an alternative version of the Shakespeare and Marlowe we know from history definitely one the best books I've read this year. Imagine Will Shakespeare and Kit Marlowe in an Elizabethan setting paired with fairies and then add to that the appearance of Morgan Le Fey and her son as well as recurring references to both Shakespeare's and Marlowe's plays. Honestly this made me do two things: a) want to re-read my favorite Shakespeare works (mostly the tragedies) and b) switch classes for the coming semester from British Modern Literature to Renaissance. That really doesn't happen all too often, but those books totally motivated me to study the Elizabethan era closer. In her extended author's note at the end of Hell and Earth, Elizabeth Bear calls this duology a 'disservice to history', but honestly I couldn't imagine re-vamping Shakespeare and Marlowe in any better way. She works with some popular theories concerning the two poets' lives and portrays her characters in a way that make them very realistic and complex. She states that the Marlowe-Shakespeare relationship she creates in The Stratford Man is almost entirely fictional, but then again it really does make you wonder "What if?" and I think that's been the intention of the book. The other thing that really intrigued me about those books what its realism and how accurately Bear worked with the historical context such as society and political background. Of course the work is fictional in the end, but she manages to have to write about homosexuality, politics and the entire concept of the Prometheus Club very 'in context', which makes the story rounder and the fantasy elements fit into the concept without jarring. These two books are definitely not quick reads for entertainment only. It took me about two to three days to get through each, not because of the size, but because of the content that's very heavy on history and politics and last but not least on the language. Bear doesn't use 100% accurate Elizabethan language in her dialogue (no 'here sitteth' etc. no worries), but it's more or less the speech characters would have used at that time. Ink and Steel and Hell and Earth are chronologically set before the other two Promethean Age books Blood and Iron and Whiskey and Water. I'm just starting Blood and Iron, but had no problems getting into the story and the whole concept of the Prometheus Club, even though the Stratford Man duology came out after the two aforementioned books. It's definitely a good starting point if you haven't read any of Bear's books yet. Definitely go for it :D P.S.: This so made Kit Marlowe my favorite hystorical fantasy crossover character of all time :D I can't wait to read more!

Published by Thriftbooks.com User , 13 years ago
This book will break your heart, over and over, and then put it back with superglue. It's a book about intrigue, doing the right thing, the wrong thing, the morally ambiguous thing. It's about caring for another person and trying to find a way to care about yourself. It is an amazing, amazing, novel.

The chewy intersetion of literature, love, and theology

Published by Thriftbooks.com User , 13 years ago
Oh. My. God. These are not the books for you if you are intolerant of literary wankery. I would also like to point out that I suspect they will make more sense if you have a grounding in the changing nature of God. If you do love literary fiction, this is an excellent example of the genre. Oh, the heartbreaking beauty of this book. I devoured it in a day. Which, given that it's a 400-pg book and it was a work day, you can see that I did pretty much nothing else. And political intrigue! And delicious foreshadowing! And the lovely conceit that all stories are true, somewhere, and that they affect the reality of Fairie. I mean, that's been touched on before, but this one is deliciously effectively used. ---- "No," Kit answered. "He could have been forgiven. Anyone can be forgiven, who repents. Faustus had opportunity, time, and chance to repent, again and again and again. But he never meant to. Never meant to repent, my lord [spoiler]." :Then what was his fatal flaw, Sir Poet?: Lucifer's eyes sparkled. He tilted his head aside, lovelocks drifting against the exquisite curve of his neck. Enjoying the game. " 'But Faustus' offence can ne'er be pardoned,' " Kit quoted. "The serpent that tempted Eve may be saved, but not Faustus.' Faustus' flaw was the sin of Judas, who deemed his transgression too great to repent of, and thereby diminished the love of God, who can forgive any offense, so long as the sinner wishes forgiveness. Faustus sinned by hubris." --- That! That right there! That's what made me twitter that I was crying, because it is so perfectly correct, so true, so chewy in the intersection of theology and literature. Believing you are unforgiveable is to diminish God's love. :waves arms madly. Um, yeah. Start with Ink & Steel. Don't blame me if you have to take a day off.

Published by Thriftbooks.com User , 13 years ago
Two kingdoms in two different worlds but tied together as both ruled by queens bound by magic but each in jeopardy of seeing their regime end. For England's Queen Elizbath I, Prometheus Club playwrights Will Shakespeare and Kit Marley risk their lives to keep her safe and on the throne; Faerie Queen Mab's only wordsmith is Kit who crosses the veil between the two realms, but has other supporters too. However, now even the prominent Prometheus Club members feel the curtain is closing on their Queen. Fearing for England, they argue over whether it is time for a regime change rather than wait for nature to do the inevitable. Kit believes both worlds need their queens to remain in power and seeks allies from both sides to insure this happens as dark magic has surfaced; Will is beginning to show his age as he enters the fourth act of life. Humans, faeries, and malevolent monsters want to end the Promethean Age and begin a new eon of darkness. The latest Promethean Age historical fantasy thriller continues the exciting The Stratford Man saga, but series fans need to read INK AND STEEL before HELL AND EARTH to learn how events got to where they are. The story line is fast-paced from the onset yet also contains intriguing references to the real Marlowe and Shakespeare, which in turn makes the magic of their words seem even more genuine as well as their relationship. Elizabeth Bear's terrific two-book entry is the Promethean Age at its seditious best with treachery threatening to destroy the reigns Queens Mab and Elizabeth. Harriet Klausner
Trustpilot
Copyright © 2022 Thriftbooks.com Terms of Use | Privacy Policy | Do Not Sell My Personal Information | Accessibility Statement
ThriftBooks® and the ThriftBooks® logo are registered trademarks of Thrift Books Global, LLC