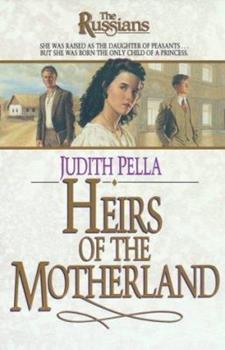 Heirs of the Motherland (The Russians)

(Book #4 in the The Russians Series)

Count Dmitir Remizov returns to Russia after eighteen years of exile, while Sergei and Anna, still hiding in Katyk, must decide whether to return to St. Petersburg.

Published by Thriftbooks.com User , 13 years ago
I won't write specifics about what I love about this book and series so that I don't spoil it for other readers. I will say that this series is fantastic. It's incorporates fictional characters with non-fictional history and events. You'll laugh, cry, get frustrated...the Pella/Phillips duo is unstoppable in this wonderful saga.

Another Great Addition to the Russians Series!

Published by Thriftbooks.com User , 17 years ago
This series just keeps getting better! This one focuseed on the characters reuniting with their loved ones. Count Dmitri Remizov finally returns to Russia for his daughter Mariana. She is thrust into a world she has never known full of beautiful dresses and men throwing themselves at her feet. But Mariana is entangled in a love triangle she never expected with her old friend Stephan from Katyk, who she has known her entire life, and her new American friend Daniel, who is writing a story about her rise from peasant to countess.Meanwhile, Victor Federcenko's fortune is dwindling and forcing him to give up almost everything he has while he lives in the Crimea in denial of the events in the past that forced him to move away from the city and lose his grip on sanity. Sergei and Anna return to St. Petersburg to be near Mariana but they fear that Sergei's secret will be found out and their entire family will be put in peril. Paul and his wife Mathilde return to St. Petersburg after living in exile in Siberia for many years. But their radical ideas are still intact and they are determined to bring about change to a country in need of changes. Heirs of the Motherland is an excellent and compelling read that is a key book in the Russians Series!

Published by Thriftbooks.com User , 19 years ago
Pella and Phillips never seem to disappoint with this series. I recommend all seven books with five stars.

As compelling as the other books in the series

Published by Thriftbooks.com User , 19 years ago
The saga of Anna Yevnovich and her family and friends continues. The fourth book centers around Anna's adoptive daughter and niece Mariana, so there is plenty of "new" to this story. However, there is a lot of dwelling on past events, so I beleive someone who hasn't read the first three of the series may be able to follow it - and perhaps find it even more interesting for that reason. I, too, enjoy Pella's writing style, and how she incorporates Anna's strong Christian faith into the story without it seeming intrusive.

Published by Thriftbooks.com User , 21 years ago
I really enjoyed reading the book. I'm a Christian so I can really relate to the Biblical principles in the book. The book was well-written and inspiring. Keep up the good work!
Copyright © 2020 Thriftbooks.com Terms of Use | Privacy Policy | Do Not Sell My Personal Information | Accessibility Statement
ThriftBooks® and the ThriftBooks® logo are registered trademarks of Thrift Books Global, LLC