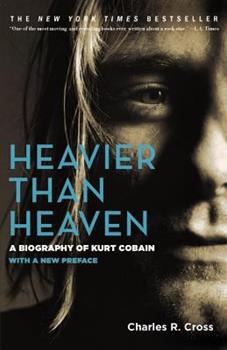 Heavier Than Heaven: A Biography of Kurt Cobain

It has been twenty years since Kurt Cobain died by his own hand in April 1994; it was an act of will that typified his short, angry, inspired life. Veteran music journalist Charles R. Cross fuses his intimate knowledge of the Seattle music scene with his deep compassion for his subject in this extraordinary story of artistic brilliance and the pain that extinguished it. Based on more than four hundred interviews; four years of research; exclusive...

Published by Fefe , 2 months ago
I believe some information is off but still accurate enough to tell his story.

Inside the mind of a genius.

Published by Thriftbooks.com User , 18 years ago
C. Cross gives a backstage pass into the mind of an artistic genius. The book is an absolutely intense study of creativity, passion, torture and talent at its best and at its worst. From detailed accounts of personal events, to Kurt's own writings and wonderful character analysis, C. Cross has really touched on brilliance here. As far as biographies go, this is perfection. For any Nirvana fan, Cobain fan, or just music fan, this is a must have.

Published by Thriftbooks.com User , 20 years ago
This book broke my heart. I am a fan of Nirvana, but never knew too much about Kurt Cobain. It's heart wrenching to read about how sad and lost he was. How many people are that talented, and able to realize that talent and use it to become a huge success? Not many. Why that success, and the love he had coming at him from many different people, especially his daughter, wasn't enough for him to want to live, who knows? After reading this book, what struck me the most was how sweet he was, underneath all that anguish, anger and sadness, he was basically a good, sweet person. I think Cross did an excellent job of getting across all facets of Kurt: the sensitive Kurt, the 'junkie' Kurt, the business-man Kurt, the amazingly-talented-artist Kurt, as well as the pathetic Kurt. Really very well researched and written. It left me wanting to know more, like the years since his suicide, follow-ups with his family. I can't help but wonder what would have become of him had he not committed suicide in 1994?

Author Charles R. Cross cuts through the myth and hype.

Published by Thriftbooks.com User , 20 years ago
Finally, a readable, engrossing tale of the Nirvana frontman,that focuses on more than the myth and hype that plagued the "grunge king." Author Cross gives us a readable tale, and focuses wisely on the early years of Cobain's life. The book manages to not skirt the issues of Cobain's depression and drug history, but wisely points out that there was more to the story of him and Nirvana than just that. Cross paints a portait of a REAL person, and not a myth. After reading the book, you may come away with the feeling that the story could be ANYONE's out of Small-Town Anywhere,USA. The book is very readable, and detailed, without undue details that can cause boredom when reading a biography of someone as highly volatile as Cobain. Entertaining, fact-filled, yet not depressing as one might imagine from a biography of this type. A sadness does prevail at the end of the book, for obvious reasons; however, I felt like I had been on one heck of a rollercoaster ride at the end, and wanted to keep going. Sadly, this would not be Cobain's fate. A must-read for all fans of Nirvana and popular music in general, as well as a cautionary tale for would-be musicians.

Published by Thriftbooks.com User , 20 years ago
I had heard a lot of things about "Heaver Than Heaven." Some of it really positive, and some of it really negative. So I was kind of unsure if I wanted to buy this book. I felt intrigued by it, yet I didn't want to waste money on something I wouldn't enjoy or that would ruin my appreciation for one of my favorite artists. Luckily, this book is quite a good read and didn't make loose any appreciation for the man or his music. Although it was sad reading about his final few months. You almost wish you could go back in time and do something, or wish that things were different. This book is basically a good incite into the life of one of the 90s biggest rock stars. It's a must read if you are a Nirvana fan.

Published by Thriftbooks.com User , 20 years ago
Cross' "Heavier than Heaven" is an "objective" biography that equally swims in pools of awe at its subject's talent while also painfully painting Cobain's frequent descents into his depths of darkness without any (hardly all ...) apologies. Aside from Azerrad's "Come as You Are," this book, unlike the vast library of junk literature on Nirvana and Hole, seeks less to cash in on the "Nirvana industry" spawned by Cobain's suicide and the search for new materials (be it music, rumors or conspiracy theories) than to "set the story straight." Though this is an impossible task, owing largely to the fact that Cobain is no longer living--and as Cross points out, Cobain was a frequent embellisher of his own past--Cross pulls off the task as successfully as it can be done. His writing style is lucid, although at times collapses under the weight of his strange use of colloquialisms. The books seems to be marked by two separate sections. From his childhood to 1990--when Cobain was "dumped" by then love-interest Tobi Vail (formerly of Bikini Kill)--and 1990 until his death, which Cross marks as Cobain's introduction to heroin. The young stoner Cobain is illustrated by Cross as equally tormented by his fractured family dynamic as he was enthusiastic about his art and his band Nirvana. After Cobain's introduction to "heroine," things take a different path, coinciding with the worldwide success of "Nevermind." Cross' book should deter any non-users from ever seeking to use the drug. Courtney Love's responsibilities and susceptibilities to Cobain's addiction make her look--contrary to her current public reputation--like a very sympathetic character. Cross' book does not even mention any "Courtney killed Kurt" or "Kurt was murdered" conspiracy theories, because like every worthy Nirvana suspected before his death from his onstage persona and from his ingeniously twisted lyrics, his suicide was inevitable. This book is just as suited for the unacquainted as it is for the most hardcore Nirvana junky who has copies of "Bikini Twilight" by Go Team or an original numbered copy of "Love Buzz."
Copyright © 2020 Thriftbooks.com Terms of Use | Privacy Policy | Do Not Sell My Personal Information | Accessibility Statement
ThriftBooks® and the ThriftBooks® logo are registered trademarks of Thrift Books Global, LLC