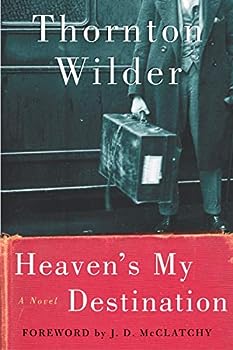 Heaven's My Destination: A Novel

This description may be from another edition of this product. "One of the most American books ever written. . . . Thornton Wilder's best, and most unexpected, book." -Wilfrid Sheed Meet George Marvin Brush, one of Thornton Wilder's most memorable characters....

Published by Thriftbooks.com User , 16 years ago
George Brush, a traveling book salesman, is the American version of the Protestant saint: opinionated, narrowminded, selfless, literal-minded, priggish, and brave, Brush is the truly good man whom no one can stomach or ignore. Wilder's writing is strong, and his portrayal of Brush is very comical. The scene of his religious conversion in college, which is instantaneous after listening to a woman evangelist, who also happens to be a drug addict, is marvelous. Likewise his "marriage of convenience" (for him). It's a fun book, though there are serious undertones throughout. George gets depressed and thinks the whole world is crazy except for him and wonders why God is "so slow in changing the world." Finally, Brush is not very smart, not very passionate, but he IS good, and perhaps, Wilder suggests, that's enough. One of Wilder's best novels.

Published by Thriftbooks.com User , 19 years ago
I was finished with this book before I really knew that I'd started it. It has a light, easy flow and a gentle sense of humor. It features George Brush, who is profoundly religious and tries his best to live up to the standards he sets for himself. What makes the story worth reading is that you always want to see what he is going to say next; despite his odd way of looking at the world, at heart George truly wants to help people and live a life of love and goodness. He speaks out against injustice and wrongdoing and is quick to defend his own traditionalist views. The fact that so many people are so quick to judge and misunderstand him, and that the people who do understand him benefit from knowing him, seems to be what the book is trying to get across. No matter how crazy or misguided he seems, he is a better person than the average Joe who never takes the time to think about his impact on the world.There is a very subtle ironic humor pervading this book; it is impossible to miss, but Wilder never makes a clown out of his protagonist. Instead one is left with the feeling that George really does make the world a better place, though he has an eccentric way of accomplishing this goal. What I had thought was going to be a stinging kind of satire about an evangelical young man ended up being a wistful satire more about the people who judge such a man than about the man himself.

Published by Thriftbooks.com User , 23 years ago
This is a story of one man finding himself amidst what he percieves as a world of coruption. It centers on a man that is compleatly absorbed by his religion but it is not nessasarly just a book about religion, though I believe many christians would enjoy this book for its christian flavor. As I am not what many would call a formal "Christian" I still believe that it has both power and meaning for those not of that faith. Heaven's My Destination is a story which one man's faith is tested. His beliefs are questioned and I believe that that story, no matter what it is he believes in, is something that all of us share at one time or another.
Copyright © 2020 Thriftbooks.com Terms of Use | Privacy Policy | Do Not Sell My Personal Information | Accessibility Statement
ThriftBooks® and the ThriftBooks® logo are registered trademarks of Thrift Books Global, LLC