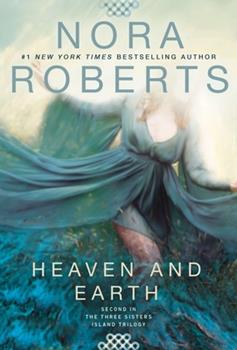 In the second book in her Three Sisters Island Trilogy, #1 New York Times bestselling author Nora Roberts returns to the haunting shores of New England--and to the lives of three passionate, powerful women... Ripley Todd's job as a sheriff's deputy keeps her busy and happy, and she has no trouble finding men when she wants them--which, lately, isn't all that often. She's perfectly content, except for one thing: she has special powers that both frighten...

Great continuation of the series.

Published by Thriftbooks.com User , 3 years ago
Great continuation of the series. I enjoyed the first and now I'm onto the last. This one was the shortest of all three.

Published by Thriftbooks.com User , 20 years ago
Nora Roberts, in my opinion, is always at her best when she gives in to pure fantasy and indulges herself in a tale as warm and satisfying as a cup of hot chocolate."Heaven and Earth," the second in her Three Sisters trilogy, is just such a book. It's about witchcraft, an ancient spell, a mysterious stranger, and the age-old struggle of good against evil. But being Nora, storyteller extraordinaire, she doesn't make it quite that simple. "Good" in this book is represented by thorny, difficult Ripley Todd, deputy sheriff of the small island, and an unwilling witch. Her struggles to deny her own powers lead her to frequent rudeness and sometimes downright nastiness. Even her growing feelings for MacAllister Booke, a newcomer to the island with a scholarly interest in the paranormal, must be ruthlessly held at bay. It is Ripley who is chosen by forces she cannot control to face and conquer the evil.But "evil," in this case, is a poor shnook of a middle-aged man, a wanna-be superstar author--in reality a third-rate journalist. Just as it is impossible to see Ripley as all good, since her flaws are so apparent, so it is impossible to see this guy as all bad. It is this contradiction in the expected that makes Nora Roberts the best-selling author she is.All of the characters from the first book, "Dancing on Air," are here, and the reader greets them like old friends. The witchcraft is fascinating, entirely fantastical, and not to be taken too seriously by those who are offended by wiccan dogma. This is just a story. And one that will leave you with a sigh, a big smile, and the need to hug somebody.Read it!

More than I Expected

Published by Thriftbooks.com User , 20 years ago
I'm one of those readers who was a little disappointed by the first book, Dance Upon the Air, in this trilogy. You have noticed it didn't keep me from buying the second installment of the series and I'm so glad I did. Heaven and Earth is a great story with romance, suspense, and the supernatural. The story flows as we are pulled into Ripley's story, catch up on Nell, and are given hints on Mia's past and things to come. Ripley Todd is the deputy on Three Sister Island where her brother Zack is the sheriff. She doesn't embrace her heritage of witchcraft like Nell, her brother's wife, or Mia, her childhood friend. In fact, Ripley goes to extreme lengths to pretend it doesn't exist. Now she's feeling like something of a third wheel. Zack and Nell survived a near death attack by Nell's former husband and have married. While Ripley is close to both, she doesn't feel she needs to be living in the same house with the newlyweds. There aren't many places to rent on the small island. Against her better judgement, Ripley goes to Mia to see about renting a small cottage she owns. To her shock, Mia has rented the cottage out to Dr. MacAllister Brooke, a paranormal researcher. While Nell and Mia have consented to helping Dr. "Mac" Brooke with his research, Ripley wants nothing to do with him. However, we don't always get what we want out of life and Ripley finds the one person who can reach her soul. The story revolves around Ripley coming to terms with herself and how evil can strike when we least expect it. I really like the way Nora Roberts developed the characters in this story. Ripley is a strong woman who is not afraid to confront any physical danger that she can see and touch. She will do anything to protect those that she loves. However, Ripley's weak point is not being able to accept what she is and having to confront the fact she can be emotionally dependent on another and still be strong. Mac is one of my all time favorite Roberts' heroes. First off, he's a geek pure and simple. He can't remember where he puts things and is always losing something, goes into a daze and forgets time when he is researching, and can't remember where simple places are like the local pizza place. Don't get me wrong, he's all man and the perfect hero. He's gorgeous and falls head over heels for Ripley. Nothing she does will make him back off. He knows what he has found with Ripley and fights to keep it. Nora Roberts has a winner with Heaven and Earth. It has all the elements of a hit and will keep you glued to the story. A short glimpse is given to Mia's story out next called Face the Fire the last book in this trilogy. Just like the rest of you "Noraholics" in the world, I'll be eagerly be waiting for the next one.
Trustpilot
Copyright © 2022 Thriftbooks.com Terms of Use | Privacy Policy | Do Not Sell or Share My Personal Information | Accessibility Statement
ThriftBooks® and the ThriftBooks® logo are registered trademarks of Thrift Books Global, LLC