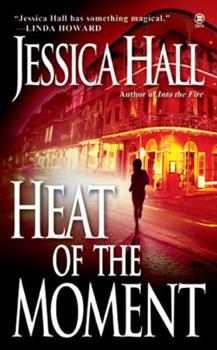 Heat of the Moment

(Book #2 in the Gamble Brothers Series)

by Jessica Hall and Lynn Viehl

Praised for her steamy (Lisa Jackson) novels of suspense, the author of Into the Fire now raises the stakes as she ignites a spark between two lovers torn between danger and desire. Original.

MY KIND OF BOOK! GREAT CHARACTERS AND GOOD SUSPENSE

Published by Thriftbooks.com User , 16 years ago
I love this book - I hate romantic suspense where the female is so unbelievably perfect - like her as a gritty heroine and I am partial to books where the characters have a lot of animosity - until near the end - highly recommended - liked her other book I read as well. Great writing! Check out - Blind Spot - Another RS with environmental theme

Steamy and Thrilling, too!

Published by Thriftbooks.com User , 17 years ago
I loved this book. Heat Of The Moment is both steamy and thrilling. Check it out!

The Heat Is Explosive And You Won't Want To Miss It!!!

Published by Thriftbooks.com User , 17 years ago
This is the first time I've ever read anything by Ms. Hall, and needless to say I've gone and ordered her entire backlist after reading this story. I came to this story not being aware of the foundation that had been laid in the previous title "Into The Fire" so I was unaware of the previous relationship between our hero Cort and our sassy heroine Terri. This was not a problem and in fact was what prompted me to purchase her other books. Cort and Terri have a certain chemistry that pulls them together even though they try so hard to fight what they both want. Terri is a first rate police detective and Cort is the fire marshal they are brought together yet again due to the case that they are both working on. Ex-girlfriends of Cort's are finding themselves being killed by a serial arsonist. Why is he targeting Cort? Terri is assigned to act as his "fiancée" and this is going to be easier said than done. Terri rides a Harley and fishes. She is not into the clothes, make-up, and hair that good society girls are into. This could be a problem...a big one. Cort and Terri are wonderfully complex characters. I truly enjoyed how their story unfolded. There is a section of the book that reminded me of a portion of "Miss Congeniality" and was a wonderfully funny part of the story that truly showed us Terri at her best. The suspense portion of the story was very intense and managed to keep the reader in the dark until the final unveiling. If you like authors such as Linda Howard, and Julie Garwood, than you are going to like Ms. Hall. This is one author that I have no trouble recommending. Official Reviewer for www.romancedesigns.com

Published by Thriftbooks.com User , 17 years ago
In the footsteps of the first novel INTO THE FIRE featuring those sexy Gamble men, this sequel is also set in New Orleans, featuring Cort Gamble. Chock full of suspense and some very hot sensuality it is a non-stop read as a serial arsonist, torches a well-known bar claiming 15 victims in a well-planned and insanely effective statement. The next target, following closely on the first tragedy, is a beautiful socialite trapped and burned alive in her Mercedes. With some super sleuthing by a cast of fully developed CSI type characters, the case lands in the lap of Detective Terri Vincent whose long sought transfer out of homicide was backfiring and bringing her right back into a personal situation she wanted to avoid at all costs. Cort Gamble, Fire Marshall had his hands full with the investigation and did not need the complications of working side by side with the one woman he determined was so not his type but could not forget. As the clues unraveled showing a madman whose aim in life seemed to be removing from Cort's life any woman he'd ever loved. In an attempt to draw a madman out Terri was assigned to play the part of Cort's lover - a part she'd played as a one night stand months ago that had left both of them with unfinished business. Would Terri's new assignment be setting them both up for a trip from the frying pan into a fire of unimaginable heat before the Torcher completed his quest? Wow, if you like books hot with intrigue, action, humor, searingly sultry and non-stop page turning, then you are sure to love this book! Additionally, coupled with the suspense of such a serious plot, there was some humor injected into the makeover of a `butch' type serious detective into a sexy socialite diva! Immediately coming to mind as I read this was Sandra Bullock and Michael Caine's battles as he did her makeover in the movie `Miss Congeniality' - this was an absolute riot! Andre, who had the Herculean task of turning a sow's ear into a silk purse was priceless! For anyone thinking that the levity detracted in anyway from the seriousness of the plot will just have to take my word that, in my estimation, it only added another dimension to the entire story making it for me one very fabulous, hot and steamy read that I most certainly can recommend. --- Marilyn Rondeau, for www.contemporaryromancewriters.com ---

Published by Thriftbooks.com User , 17 years ago
Terri Vincent is a cop on the NOPD, IF you read INTO THE FIRE you remember her and her partner JD Gamble. JD and Sable are on their honeymoon and Terri has requested a transfer until he returns. She doesn't want to have to work with or near Cort Gamble, JD's brother. She has been in love or lust with him for 10 years and after what happened between them while JD and Sable were hiding from Sable's father's killer in INTO THE FIRE,she feels she needs to get her head straight. Cortland Gamble has had a lust for her ever since he met her at his brother's graduation. but like most men he doesn't want or need a woman who would complicate his life. He likes his love them and leave them life. A serial arsonist, the Torcher, is terrifying the city, and Cort as Fire Marshall is striving to catch him. Terri is transfered to the Organized Crime Unit and gets hit with investigating non other than Cort Gamble. The head of the Unit thinks Cort has ties to the mob. What can a girl do? Terri decides to try to prove Cort's innocence. When the Torcher starts killing the women Cort has dated, Terri is tapped, against her will and Cort's, to play the part of his latest conquest. Naturally this throws them togather alot, and human nature takes it's course. With romance, suspense, and action set in the wonderful city of New Orleans, how can you miss? I enjoyed the book, even if you haven't read INTO THE FIRE, you will enjoy it. Then you can find INTO THE FIRE also an excellent read.
Trustpilot
Copyright © 2022 Thriftbooks.com Terms of Use | Privacy Policy | Do Not Sell My Personal Information | Accessibility Statement
ThriftBooks® and the ThriftBooks® logo are registered trademarks of Thrift Books Global, LLC