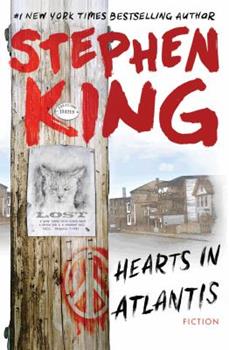 Published by Thriftbooks.com User , 18 years ago
With a novel as rich, delightful, and fascinating-in one word unputdownable-as this, no matter how hard you try to write a thorough review about it, it's very likely that you will leave something out. The story begins while the main characters, Bobby Garfield, Carol Gerber and John Sullivan, childhood friends growing up together in a small American town, are eagerly expecting the coming summer vacations, unaware that before the summer is over their lives are going to be changed forever. Spanning four decades, the novel shows us how, though the eyes of a wide group of characters, directly and indirectly related to Bobby, Carol and John (Sully) and through their own eyes, their lives unfold. Stephen King's narrative all through the book is at his best. He incorporates supernatural elements using his mastery of the craft and creates characters so humanly natural that they feel to the reader like old college friends. The experiences of the main characers are so well balanced between the quotidian and the extraordiary, that I almost felt this was a true story about real people. The supporting characters are so interesting that one cannot help wanting to meet them face to face and know more about how their lives unfold. The places are so richly and vividly described, and the time periods so pictorially represented through fashions, ideologies, settings, and even music, that you actually feel the richness and evolution of American culture as you read, even if you didn't live through those times. Of everything this novel has to offer, what I liked the most, without a doubt, is its spectacular, believable, satisfying and sweet ending. This novel is charming, entertaining, surprising and fun, for both fans and non-fans of Stephen King, and for everyone who enjoys the twists and turns of life and the hidden connections between the lives of strangers. A must read. --Reviewed by Maritza Volmar

Wow. Crawl inside this book and live awhile.

Published by Thriftbooks.com User , 21 years ago
This short story cycle is packed with vivid, real characters that seem like you've known them all your life. King embodies different viewpoints masterfully, plausibly capturing the perspectives of innocent children, college revolutionaries, vietnam vets, and baby boomers.The first story, "Low Men in Yellow Coats," kicks off the action but is the weakest of this strong set. It's too tied into the Dark Tower series to seem as real as what follows. That said, it's still scary and moving, it just won't be as accessible to those who haven't read the Dark Tower series.The remainder of the stories concentrate on real people in real situations with only a smattering of the supernatural. That's not to say there's no horror -- Vietnam certainly qualifies -- but this is the closest King's gotten to straight fiction.What surprises literary types (and doesn't surprise those who've actually read King) is how well he pulls it off. He gives us social commentary, believable, complex characters, and engrossing storylines without a single vampire or undead cat.I read this book in two sittings, then closed it and wiped away tears. King is not merely a fine horror writer, he's a fine writer, period.

ONE OF THE MOST UNDERRATED WRITERS OF THE TWENTIETH CENTURY

Published by Thriftbooks.com User , 21 years ago
I am a twenty-year-old English major who has read every work Stephen King has ever written. While I consider many of his recent books to be large disappointments, I view HEARTS IN ATLANTIS as hugely successful, a brilliant novel and by far his best since MISERY (which remains my favorite of all his works). It is passionately written and conveys bold, momentous messages, everything from the questionable purpose(s) of war to the difficulties of growing up, of becoming an adult while clinging to the sweet memories of childhood and adolescence. It is a rich, beautiful story, expertly crafted and perhaps the most overwhelmingly poignant of all Mr. King's works. It is, in short, a jewel of a book, a monumental achievement, and a piece of literature which I truly believe shall one day be considered as much a classic as Salinger's CATCHER IN THE RYE, Steinbeck's TRAVELS WITH CHARLEY IN SEARCH OF AMERICA, Kerouac's ON THE ROAD, and Kesey's ONE FLEW OVER THE CUCKOO'S NEST. (At least, it DESERVES to be regarded as such.) And I fervently hope that HEARTS IN ATLANTIS at last convinces all the skeptics out there that King is quite capable of producing more than "horror garbage," that he is, in fact, one of America's most talented and moving story-tellers, one who can not only transcend his chosen genre but surpass in deftness many of the best writers of those genres into which he only sporadically ventures; such, I believe, is clearly the case with HEARTS IN ATLANTIS. I unreservedly and whole-heartedly recommend this masterful piece of fiction not only to King fans but to all those who love good writing and good stories. HEARTS, I assure you, offers both.
Copyright © 2020 Thriftbooks.com Terms of Use | Privacy Policy | Do Not Sell My Personal Information | Accessibility Statement
ThriftBooks® and the ThriftBooks® logo are registered trademarks of Thrift Books Global, LLC