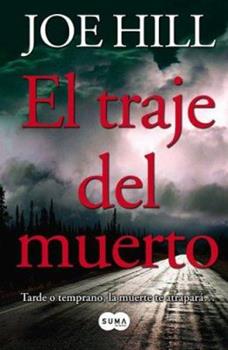 If ever there was a case of caveat emptor, this is it . . . Stephen King's son immediately vaults into the top echelon of dark fantasists with a blood-chilling roller-coaster ride of a novel, a masterwork brimming with relentless thrills and acid terror. Aging, self-absorbed, death-metal rock star Judas Coyne was a collector. He collects the bizarre, the uncanny, and the grotesque. Many of these objects were gifts from the black-clad fans that made...

This book kept me up at night!

Published by Corinne , 9 months ago
Once I picked this book up I couldn't put it down. Great read. Joe Hill has a talent for writing. I enjoy his work very much! This book kept me up from fright and totally Immersed.

Published by Octavia , 1 year ago
This book read like a made-for-TV movie to me. No real suspense, horror, or characters that I cared for.

Published by Codi , 1 year ago
Though you really have to push through the beginning to get to the good stuff, throughout the action packed climax and ending you are really feeling the chilling eyes of the ghost on the back of your own neck! Absolutely stunning writing from a family of thriller writers.

Joe Hill is a very good writer. He gets and keeps your interest throughout the entire book.

Published by Thriftbooks.com User , 2 years ago
A book for my son!

Published by Thriftbooks.com User , 4 years ago
"You want sympathy, go f*ck James Taylor." And BOOM! Just like that, I'm a fan! A modern, fresh ghost story. Very inventive and witty. I hope Joe continues to make his mark in the horror, thriller genre. I'm on to another as I write this. 'Heart Shaped Box' was quick, a real page turner that actually made me cry at one point. And although I never like it when 'mans best friend' becomes a victim...I still enjoyed the story. This will undoubtedly become a classic. I will be sharing my copy with friends and family members who have great taste in scary stories, like I do! He is definitely his father's son.

Published by Thriftbooks.com User , 5 years ago
I heard the publisher originally only printed 500 copies of this Horror novel by Joe Hill. It later became a NYT best seller & won a few awards. Then after he proved his success with this very novel, without using the family name, he came clean on being Stephen King's son. The Heart Shaped Box is a must read for any Horror reader wanting to get started with Joe Hill.

Published by Thriftbooks.com User , 13 years ago
Joe Hill is absolutely NOT afraid to step outside of the Box, even if that box IS heart-shaped. This is an amazing book that I couldn't seem to put down. I love horror, thrillers, mysteries and anything that will make me wonder about that noise that goes "bump" in the night. I've been that way all my life. This book doesn't disappoint. It's a page turner in every sense of the word! Something I wish for in all books that catch my eye or take my breath. With a unique story-line and writing all his own, Hill makes for one terrific terrifying tale. Jude Coyne is an aging rocker. He's had his fun. His "flavors of the week" whom he lovingly refers to by the State that they are from. Currently he lives at home with Georgia and his two loving dogs. Hill makes characters that you immediately feel for, love and hate, cheer for and wish the worst upon. The story is never flat and never filled with things we just do not need to know. Jude is crude, mean and even a little on the rude side, after all, he's a spoiled rock star with fans that just can't seem to get enough of him. (It reminds me a lot of the late 80's and early 90's...which were always great times for me!) When Jude Coyne wins an on-line auction (sort of an Ebay buy-it-now kind of thing) for a suit that has a ghost attached, he gets more than he bargains for! Jude thinks he's adding to his morbid collection given to him mostly by his loyal fans, pieces of the macbre that he owns and is quite proud of collecting. But how did his loyal assistant find this auction? Who was selling and why? Better yet, why would a suit arrive in a black heart-shaped box? Jude's past is about to catch up with him via UPS. It's all there...all packed in one unique, unusual, story that will keep you guessing until the very end. A great read! Pick it up, you'll be glad you did!

Published by Thriftbooks.com User , 14 years ago
With Heart-Shaped Box, Joe Hill has proven he's a serious writer who deserves favorable comparison with his more famous father. Hill has his own style and an ability to build tension that rivals dear dad's own expertise at effective horror fiction writing. What I enjoyed most about Heart-Shaped Box however was Hill's original writing style and vivid imagination. Another work of highly original writing that I would also recommend is The Divorce of Buddy Figaro: A Taoist Comedy Novel, by David Silverberg. Although his writing style is quite different, Silverberg manages to combine a man's divorce with a science fiction story and Taoist teachings. I recently picked up both books and I find they make a great pair of back-to-back escapist journeys into the unknown. I highly recommend both Heart-Shaped Box and The Divorce of Buddy Figaro: A Taoist Comedy.

Published by Thriftbooks.com User , 14 years ago
I was a Stephen King fan going way back and always love to get my hands on a new book that makes me feel like I did when I first read King classics like The Shining, The Stand and Misery--like I was riding in a car barrelling down a road at night, going a little fast for my comfort but knowing that the driver had a sure hand on the wheel...even if he's overdriving the headlights just a little and the landscape around the car is getting more surreal, I'm sure we'll make it out okay on the other side so I just have to buckle in and enjoy the ride. It's been a long time since I've enjoyed a horror/supernatural book in that way. When I saw the great reviews for Joe Hill's Heart Shaped Box, I got my hopes up and hurried to get the book in my hands. I was not in the least disappointed. Heart Shaped Box is a bit of a horror tale, more than a hint of Southern Gothic, a road story but above all it is a tale of redemption. Judas Coyne is a heavy metal rocker who used his music to express the anger and hurt of his own abusive upbringing, and is now living in luxurious if semi-meaningless retirement. He manages his holdings, has a succession of much younger girlfriends named after states, and has a collection of oddities bought off the internet or purchased over the years. So he can't resist the opportunity to buy a real ghost, which comes attached to an old fashioned suit the ghost used to wear. As soon as the ghost arrives, however, Judas finds there's much more at stake. He's been set up, and this ghost-or whatever it is-has a very personal vendetta with him. He and everyone close to him will die, the ghost promises. The rest of the story unfolds the plot against Judas, and his attempts to outrun the ghost and its vengeance, saving his own life and that of his latest girlfriend. In the process he tries to redeem not only his own humanity, but that of Georgia, the latest girlfriend, and Florida, the one whose tragic death set the entire ghostly plan into motion. Like my favorite STephen King books, there are moments of absolute realism and moments of almost absurd grossness that is nonetheless unforgettable. The plot is tightly wound and never loses steam, and even better, both Judas and the other main character, Georgia, develop into people I was genuinely rooting for. I read this book in less than a day and eagerly await more from Joe Hill. If you like good horror and good suspense, this is one to check out.

Get on that nightroad...

Published by Thriftbooks.com User , 14 years ago
Reading HEART-SHAPED BOX is like getting sucker-punched with a vicious left hook to the gut. This book comes with a mean streak and a bittersweet aftertaste. At not quite 400 pages, it feels like a slimmer novel, it motors along so easily. I got so immersed into the reading of this book that the alarm clock went off and totally shocked me with all the time that had sped by. SPOILERS begin. The plot involves aging rock star Judas Coyne who, in the course of his rock-and-rolling career, has casually amassed an assortment of freaky memorabilia (sketches of the Seven Dwarfs by John Wayne Gacy, Aleister Crowley's childhood chessboard, a three-hundred-year-old confession signed by a witch, etc). On a whim, while viewing an online auction site, he purchases a ghost for a thousand dollars, this ghost being embodied in the dead man's old-fashioned Sunday suit. Not until later does Jude find out that that auction site was meant for him - and him alone... Jude thinks nothing more of his purchase until, some time later, a UPS truck drops off a black, heart-shaped box housing the suit. Immediately after, eerie and unsettling events begin to happen, starting with Jude's alarming glimpse of a shadowy old man sitting in his hallway one ominous night. From there, it gets really, really frightening and perilous as he and his lived-in, much younger girlfriend Georgia (he always calls his girlfriends by their state of origin) are mercilessly haunted and terrorized by the vindictive ghost. The ghost is written as such a powerful and malevolent entity that I really couldn't fathorm how Jude and Georgia could possibly end up on the sunny side of things. Thru the course of the novel, we find out that the spirit, whose real name is Craddock McDermott, had been a celebrated hypnotist and dowser while alive. In life, his preferred tool of trade was his razor blade dangling from a chain, which he had used as a focusing point for his hypnotisms. Now it serves to add to the boo factor. In death, Craddock's powers of persuasion seem to have increased exponentially as, now, he is able to rapidly and even more insidiously influence his victims. Craddock also has a way of inhabiting radios and televisions as he uses these mechanical objects to further harass Jude and Georgia, and, in one instance, influence a non-involved driver to nearly run them down. Each progressive encounter with Craddock finds Jude and Georgia more wounded and devastated as their terrified flight from the ghost becomes rapidly tinged with an overwhelming sense of hopelessness. One of the reasons I picked up this book is that, sometime last year, I read (either in Daily Variety or Hollywood Reporter) that Joe Hill was, in fact, the son of my all-time favorite horror writer, Stephen King. I was curious to see if the horror gene is transferrable. The answer seems to be...yes. HEART-SHAPED BOX is Joe Hill's first full-length novel, but it doesn't read like a rookie effort. The pace and aura of dread a
Copyright © 2020 Thriftbooks.com Terms of Use | Privacy Policy | Do Not Sell My Personal Information | Accessibility Statement
ThriftBooks® and the ThriftBooks® logo are registered trademarks of Thrift Books Global, LLC